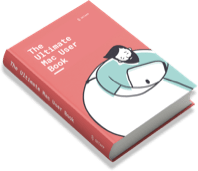 Get a free addition to Setapp — the Ultimate Mac User Book.
Buy now

Between 9 and 18 March, tens of thousands of tech enthusiasts, music lovers, gamers, innovators and film fans will descend on South by South West (SXSW). One of the most prominent interactive and innovative festivals in the world, SXSW is a chance for the tech and startup community to meet, launch new products and reflect on recent successes.

Setapp, the first Mac app subscription service created by MacPaw, beat hundreds of nominees to gain a place in the 21st annual Innovation Awards presented by KPMG, recognizing “the most exciting tech developments in the connected world.” Every finalist either launched during 2017, or underwent a significant re-design and relaunch.

There are thirteen categories, with five finalists in each. On Sunday, March 11, every finalist will get a chance to demo products and apps to SXSW attendees. The public will then vote for their favorite, with the winner of that getting crowned the People’s Choice Award at the award’s ceremony on Tuesday, March 13.

Who else gained a nomination?

Finding ourselves on this list of finalists is a great honor. Judged by industry experts and peers, Setapp made it onto the New Economy list of five, for “those redefining the exchange of goods and services, from the sharing economy, to virtual currency, to micro-finance, to mobile-device-payment systems, and beyond.”

We find ourselves alongside companies that have created an interactive fitting room, the world’s first AI-powered financial advisor and an operations platform for self-driving fleets. In other categories are responsive design billboards for Coca-Cola, Google Earth, the world’s smallest, smartest, and most social astronomy camera, and numerous innovations in AR, VR, AI, wearable tech, connected devices, biotech, and entries from Airbnb and Microsoft.

Apart from category and the People’s Choice awards, there are other awards for Best of Show, Breakout Trend, Speaker, Hall of Fame and the most popular (and viral) Meme by one of the 65 nominated.

2017 was a fantastic year for Setapp, since launching in January. We already exceeded $1.4 million MRR and have tens of thousands of customers in dozens of markets across the world. We were equally pleased to end the year with several awards from Mac enthusiasts, bloggers and the tech community, including:

These awards and this show of support from the Mac community means so much to the whole team. We look forward to continuing to serve all of our fans and customers in 2018.

And we also want to wish every well-deserved finalist at the Innovation Awards the best of luck!

Check back here to see if we win after 13 March.