WiFi is quite possibly the best thing to happen to the internet.

Back in the late 1990s and early 2000s, when dial-up was the only way to visit a website, the idea that a few years down the line we’d be sitting in coffee shops and browsing the web on laptops without wires would have been preposterous. And that we’d be doing it from handheld computers that double as cell phones would have been incomprehensible.

But technology is brilliant, and now we take WiFi for granted. So much so, in fact, that we expect it to be available everywhere we go. And not only that, we expect it to be good — strong enough to stream YouTube at the very least. When it’s not, we could feel like we are missing a limb.

Bad WiFi isn’t always the fault of the provider or the router. It can be. But mostly, there are other things at play. It’s how WiFi is configured that often makes or breaks a good WiFi signal.

What can get in the way of the WiFi signal?

WiFi signal strength and speed depend on a number of factors.

Network usage — the more devices use a network the higher the bandwidth requirements and the lower the overall speeds.

Network interference — the more devices use the same frequency bands the more overcrowded and less effective they become. The most popular band is 2.4GHz, used by the majority of homes and businesses. Its overuse can result in speeds being limited at peak times. It also doesn’t help that things like microwaves and Bluetooth devices operate on the same frequency. Because of this, the adoption of the 5GHz frequency band is growing. If you think of bands like freeways, 2.4GHz is a busy one during rush hour, whereas 5GHz is like driving at 2 am. Quieter lanes and fewer obstructions.

Physical obstructions — WiFi has difficulty penetrating solid objects. Walls, ceilings, doors, and even people affect signal strength. The fewer obstructions there are between the wireless access point and the device, the stronger the signal will be.

There are other factors such as channel limitations (as explained by Extreme Tech), poor positioning of antennas, and provider bottlenecking (throttling network speeds to provide even coverage). However, network usage, interference and physical obstructions are the most common things you’ll have to deal with when managing your own network.

Why do you need to carry out a site survey?

Whenever your WiFi is underperforming, it’s worth carrying out a site survey.

Site surveys help you assess WiFi performance and work out where the signal can be improved. With the growing number of personal WiFi devices, Internet of Things gadgets becoming increasingly popular, and sporadic building improvements, a survey will ensure the strength of the signal and even area coverage, as well as detect dead zones and network interference.

Before we go through the wireless site survey checklist, downloading the NetSpot app to make site surveying a lot easier. NetSpot not only lets you check WiFi coverage but also helps you plan your entire wireless network and troubleshoot any problems that may arise. You can upload or draw building plans, and work out exactly where access points (AP) should be placed for optimal performance.

Step 1. Look at the floor plans

If you don’t have floor plans for your building, you can draw them using NetSpot’s WiFi planning tools or upload original drawings. This also comes in handy when you are working outside of your home — in a coworking space, for example — and want to find where to sit to get the best internet connection.

What you’re looking for in a floor plan is if there are any obstacles that block or interfere with radio signals (despite being digital, WiFi uses analog radio waves). Walls, ceilings, floors, hallways, doors, and elevators can all cause issues.

Use the floor plan to identify where people that require WiFi access are (or will be) located. For example, if you have a design team working on the second floor, a router on the ground floor at the opposite side of the building is going to offer them a patchy signal at best.

Use the plans to work out where coverage exists or is required.

To provide the sort of WiFi coverage that people expect and need to work efficiently, there should be an AP in every area that requires access to the internet. This not only involves the location of routers, but the installation of power and network cables to link the APs.

For best performance, you should look to install APs at a height — as close to the ceiling as possible. There are fewer obstructions at ceiling height, which allows for a stronger signal to be sent to the devices below. Avoid placing APs above the ceiling though, as things like ducts, pipework, and fixtures will disrupt the signal. 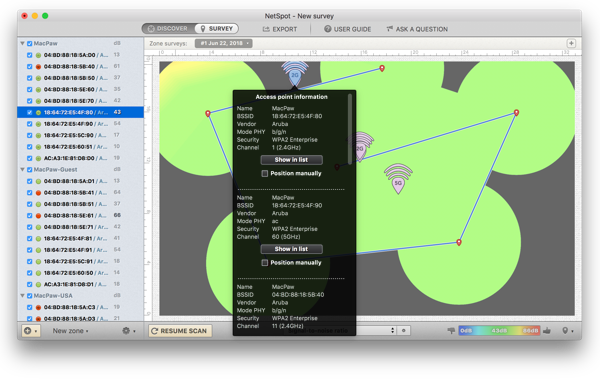 Also, steer clear of placing APs in hallways (people rarely need to use WiFi in hallways anyway) or too close to concrete walls. If fitting APs at ceiling height isn’t achievable, consider installing them on adjacent walls so that there’s still a decent strength signal path.

Step 3: Work out how many access points you need

Modern routers can boast a signal strength radius of 300 feet. It’s unlikely — unless you have a huge open-plan building — that you’re going to get this sort of coverage, though. It’s better to keep expectations at around a 100-foot radius.

If you already have APs in place, NetSpot will work out where they are and run diagnostics on signal quality. You’ll then be able to establish where additional routers are required.

The simplest way to test coverage is to simply walk around the building with a laptop in hand and note the signal strength as you go. A much more accurate way though is to use iStat Menus, which offers real-time info on upload/download speeds. 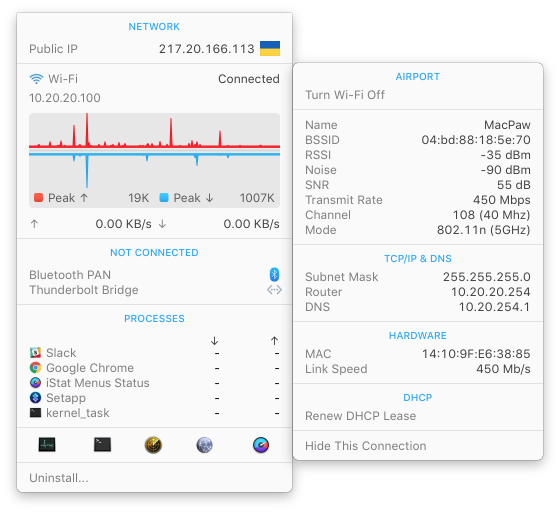 For both accuracy and simplicity, use the NetSpot network mapping feature, as you’ll have access to a WiFi heat mapper that can immediately identify where APs are underperforming and flag any signal black spots.

Get a huge set of top apps for keeping your Mac in shape. Best utilities in one pack, give it a go!

Step 5: Troubleshoot the network and test

A coverage test will show you where AP signal strength is faltering. What you’ll need to do now is relocate APs, install additional hardware where required, and test again. It’s sort of like adjusting the aerial to get a decent signal on an old TV or radio. Keep tweaking until you hit the sweet spot.

With AP locations adjusted, test again. And repeat as required. It could be a long process, but it’ll be worth it when every device shows full-bars on their connection indicators.

Save all of your data for future reference. You’ll be doing this again at some point. 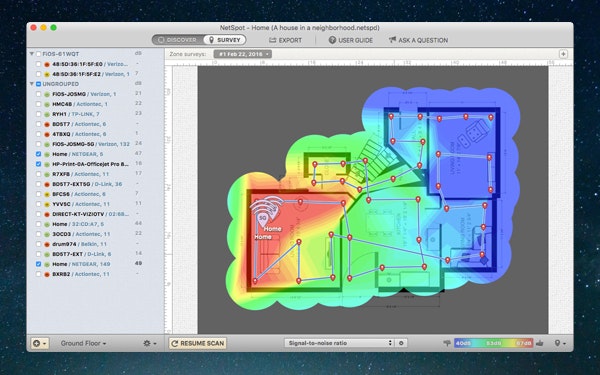 Unfortunately, WiFi is forever at the mercy of its environment. As your business grows, WiFi dependencies will change. There’ll be new departments created, rooms changed around, walls built, and Macs installed. All of these things, along with that new internet-enabled refrigerator and kettle, will affect wireless signal.

Therefore, it’s worth conducting a wireless site survey using NetSpot app at least twice a year, or when any obvious changes occur within your building. If nothing else, it will allow you to keep the peace. After all, good WiFi equals happy people!