Get Setapp for devs
Unlock the power of top dev apps on Setapp.

The macOS command line interface can be intimidating — but there’s lots of value inside. By using the command line, you can solve many tasks on Mac by running commands in Terminal. It helps streamline a lot of work, especially for software developers.

Package managers like Homebrew make the command line interface even more powerful. In this tutorial, we describe how to safely install and uninstall Homebrew on Mac. We also suggest a few tools similar to Homebrew you could benefit from.

What is Homebrew and how does it work?

“Homebrew installs the stuff you need that Apple didn’t” — this is how Homebrew creators describe it, and we agree. If you want a more informative definition, Homebrew is a free and open-source package manager for macOS, helping you install, update, uninstall, and manage developer tools like Python, Ruby, and Node.js on your Mac.

Why do you need it? With Homebrew, you can benefit from tons of command line tools to automate your work. Best of all, they are all installed, uninstalled, and updated in one location on your Mac. Here are just a few examples of the useful tools you can get through Homebrew:

To go easy on the coding jargon, we won’t be explaining how Homebrew works under the hood. The main thing you should know as a user is that Homebrew acts through Terminal commands — you can install, update, and uninstall packages by typing a few words. There are some simple default brew commands for installing single-file utilities, and more advanced subcommands called casks — you’ll have to use those to install multi-directory utilities.

Get the tools your Mac lacks

Streamline your flow with top-rated apps, all available with a Setapp membership.

Requirements to install Homebrew on Mac

Before you dive into the process, make sure your macOS meets the following requirements:

If you already feel confused…That’s normal. Command line is tough. If you want a simpler solution, we recommend looking into Setapp. It’s a subscription service that gives you access to 240+ Mac and iOS tools for development, working with media files, design, and so on. Here are just a few: 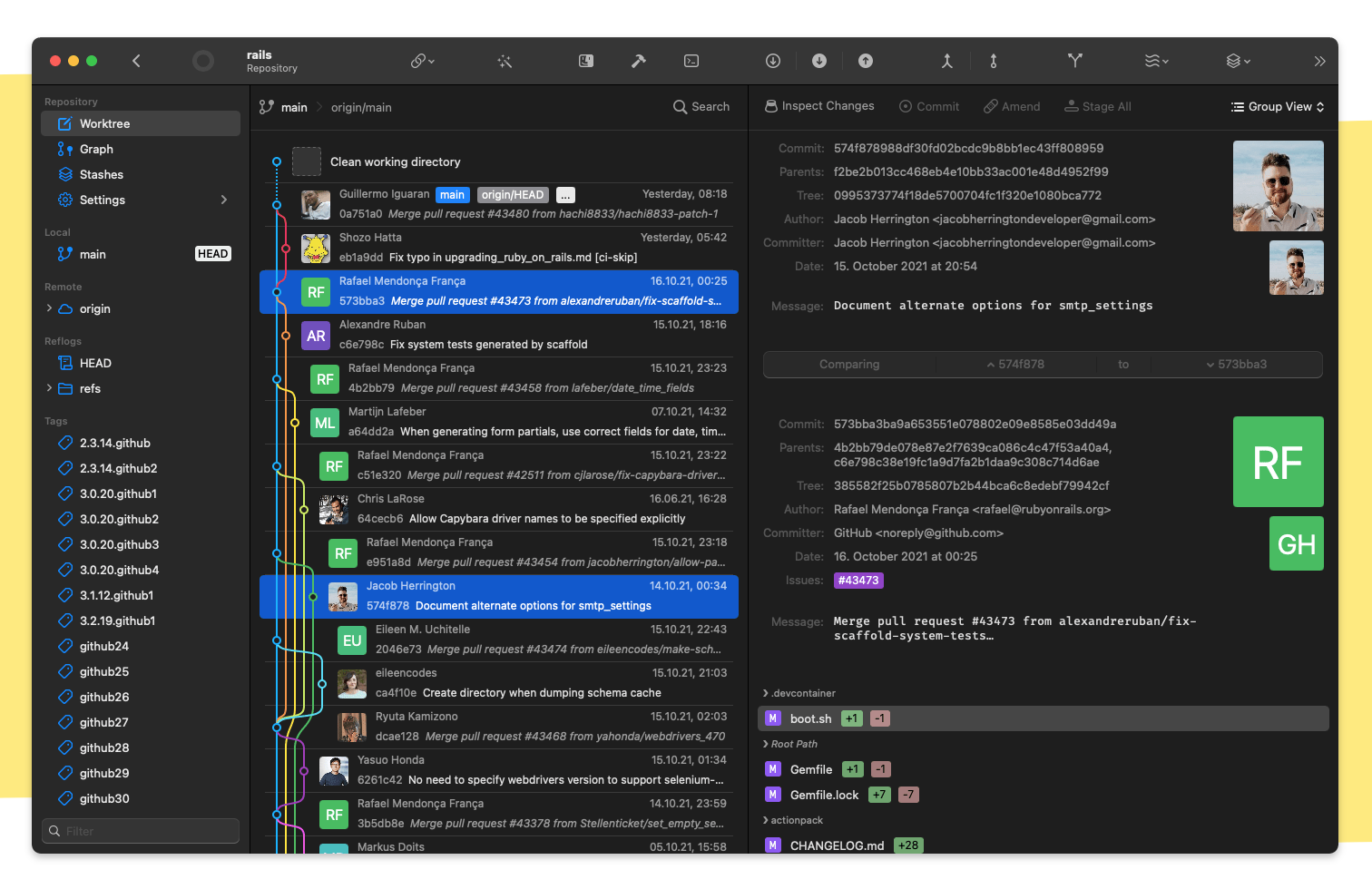 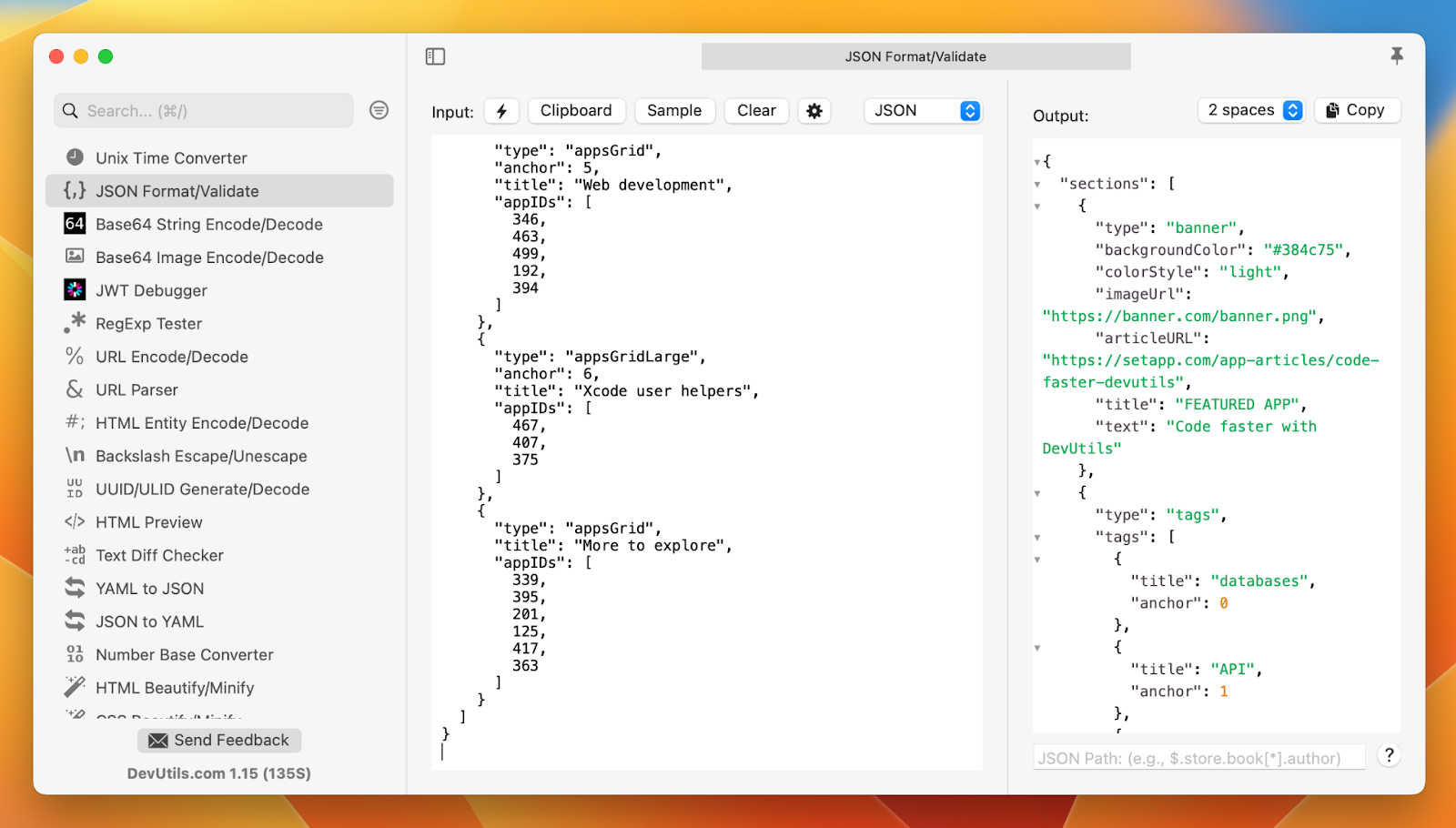 The beauty of Setapp is that you don’t have to know the names of these apps or their full functionality — you just type your task in search (for example, “edit PDF”), and Setapp gives you the apps that can edit PDF. It’s that simple. 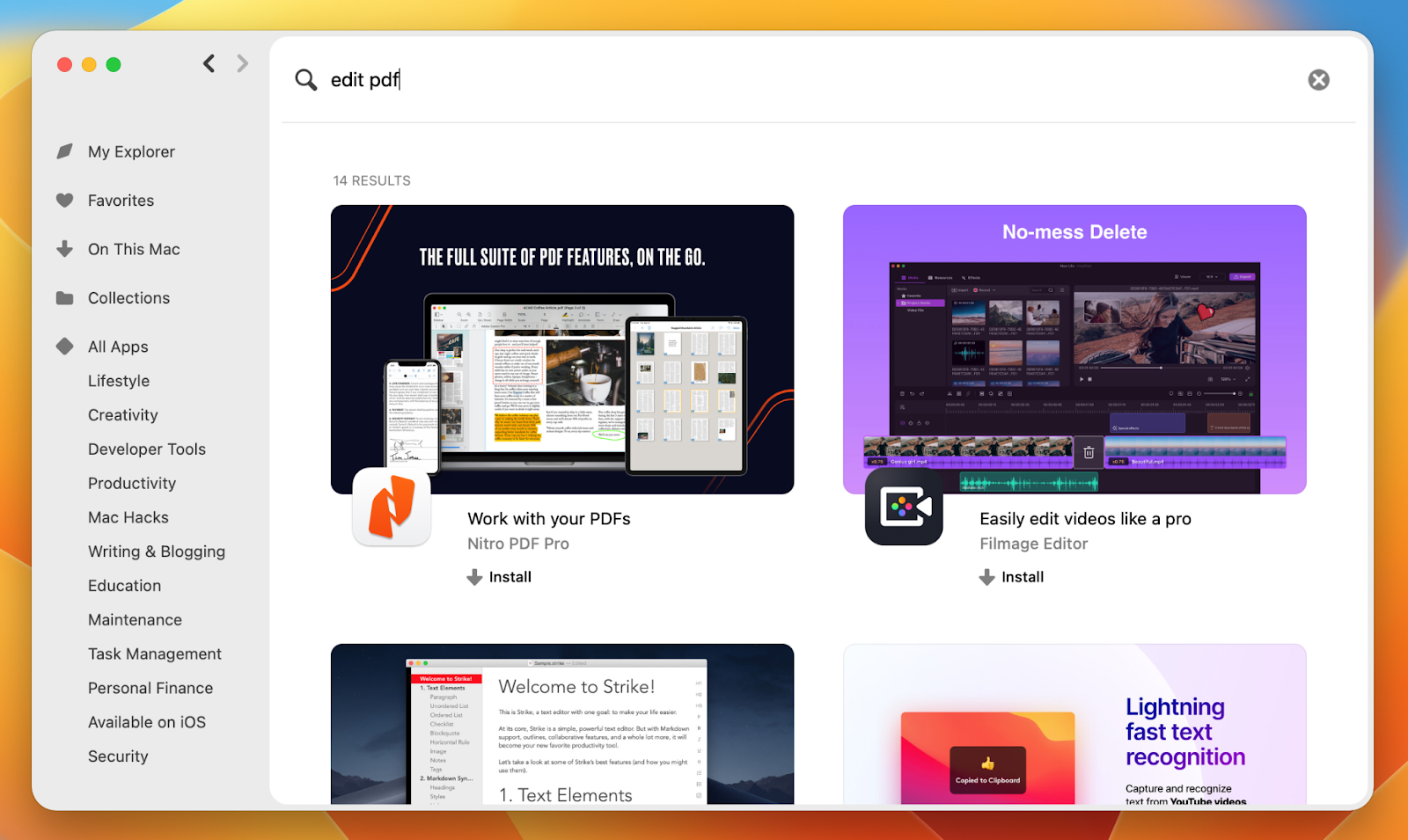 How to install Homebrew on Mac

Moving to the main part — ”install Homebrew Mac” — we should explain that the installation method we describe uses curl to download the installation script. This method is the easiest and it’s recommended by the Homebrew team. The same applies to the process of uninstalling Homebrew. Since some people don’t want to use curl for security reasons, there are ways to manually download and execute the script (but we won’t go into that here).

Xcode is Apple’s native IDE, an integrated development environment that has all the tools you need for software development on Mac. To install some of the Homebrew package components, you need to install Xcode’s command line tools first (in case you haven’t done it before).

Here’s how to install command line tools for Xcode:

Now your Mac is ready for Homebrew. Here’s the full installation process:

If you don’t want your data to be collected and shared with the Homebrew developers, here’s the command you should run in Terminal to turn off analytics: brew analytics off

In Terminal, run brew help to get started. You’ll see examples of commands that will help you install different software, configs, and updates through Homebrew. For example, to install a package, you should type brew install ‘package name’ in Terminal. There are also a few useful troubleshooting commands you should take note of, such as brew doctor to detect installation issues. 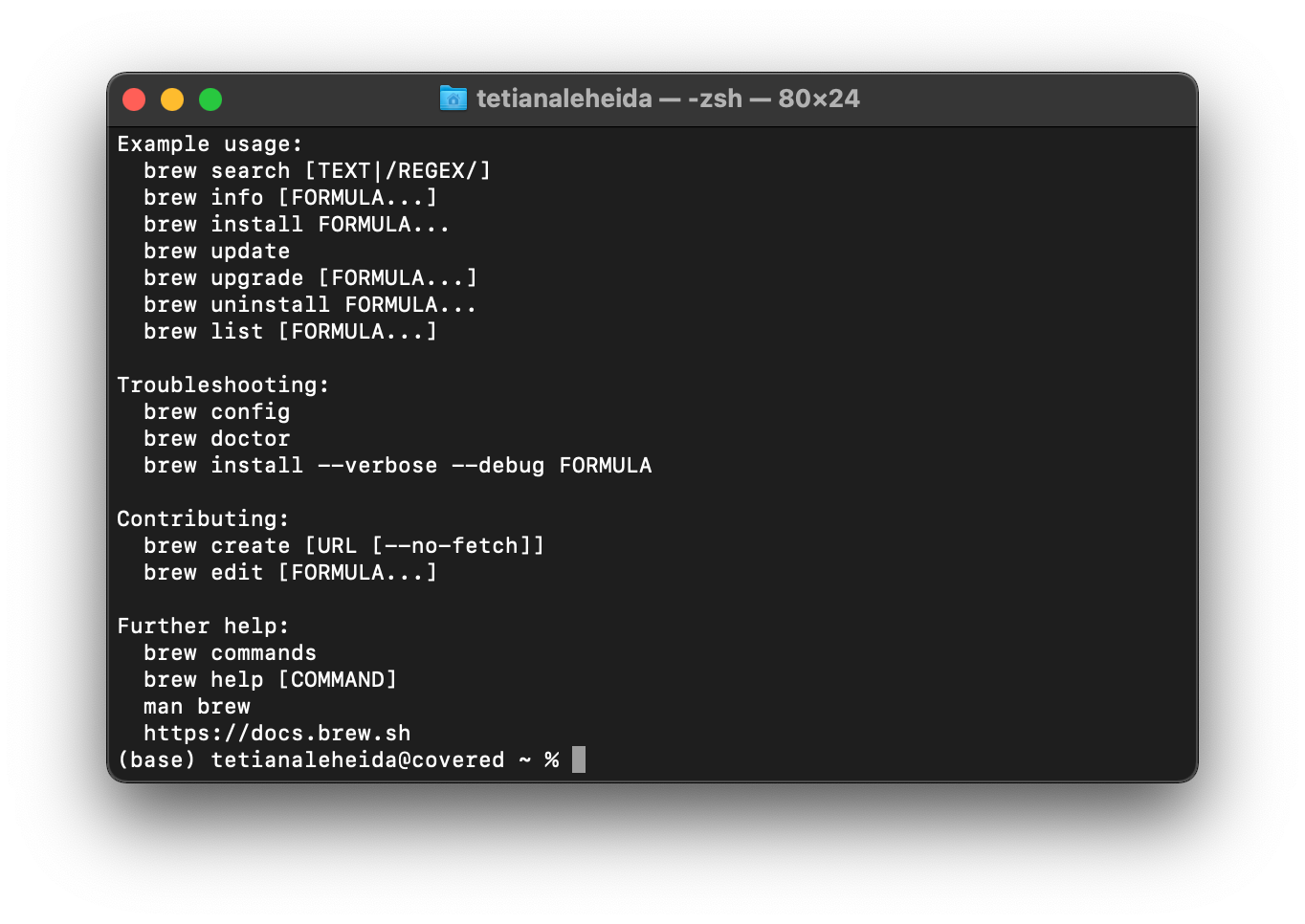 Anything you install via Homebrew needs to be updated regularly. You should also update the package manager occasionally to make sure it works properly and you’re not missing some important new features:

If you’re new to Homebrew, follow Homebrew’s Community Discussion — you’ll find lots of insights and troubleshooting tips from other Mac users in there.

Do even more with DevUtils! Install the most essential offline developer toolkit and solve the tasks Homebrew can't solve.

How to uninstall Homebrew from Mac

If you haven’t found much value in the Homebrew Mac tools, you can easily uninstall the package manager through Terminal.

Here’s the command you should run to uninstall Homebrew on macOS Big Sur, Mojave, Catalina, and later:

Here’s the command you should run to uninstall Homebrew on macOS High Sierra, Sierra, El Capitan, and older: 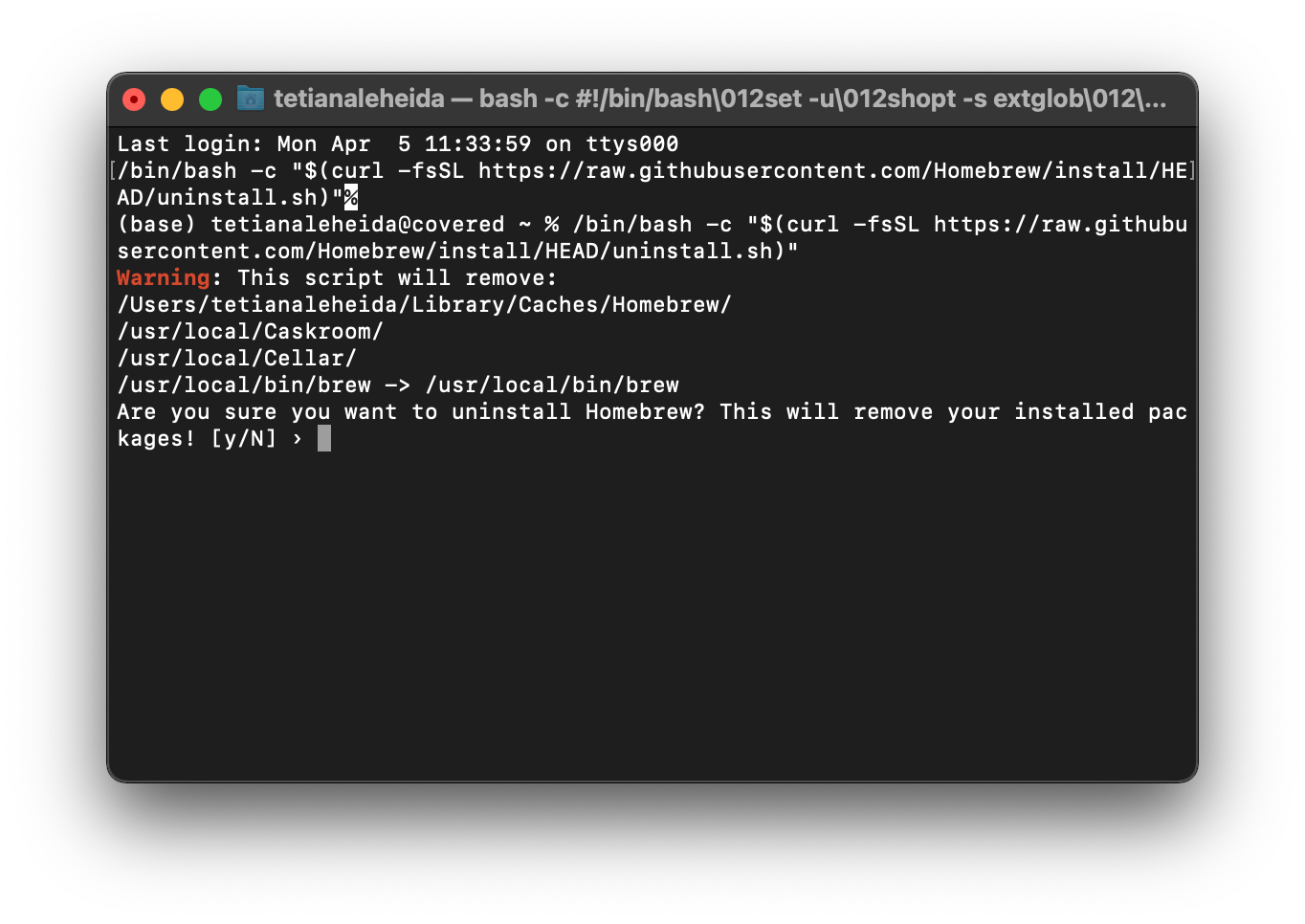 You’ll be warned about the Homebrew files that will be deleted from your Mac.

Note: If you’re worried you paste the command incorrectly or it doesn’t work for you, check the Homebrew website for detailed instructions.

How to uninstall Homebrew packages from Mac

If you don’t want to get rid of the package manager itself — but rather remove specific packages — you can do that. Here’s how:

Homebrew leaves your Mac cluttered. Here’s how to fix it

The most common problem with Homebrew is that once you start using it, versatile files and configs start piling up on your drive. This seems logical because the whole point of using Homebrew is to help you install some extra stuff on your computer. But the problem is Homebrew also generates a lot of clutter you don’t need.

Every time you update a specific package or Homebrew itself, a copy of the old version is created. These copies don’t go anywhere — they just sit there, eating up your storage space. You can check how much space is occupied by old copies if you run the command brew cleanup -n in Terminal. The worst thing is it’s nearly impossible to delete all these leftovers by simply uninstalling Homebrew.

CleanMyMac X is the only app that can remove Homebrew completely, with all the files, directories, and copies associated with it. Just run a System Junk cleanup > Clean. Before you agree to delete the junk CleanMyMac X has found on your Mac, you can click on Review Details to make sure you don’t remove anything important. Spoiler: That won’t happen because CleanMyMac X is smart enough to remove only the clutter you don’t need. 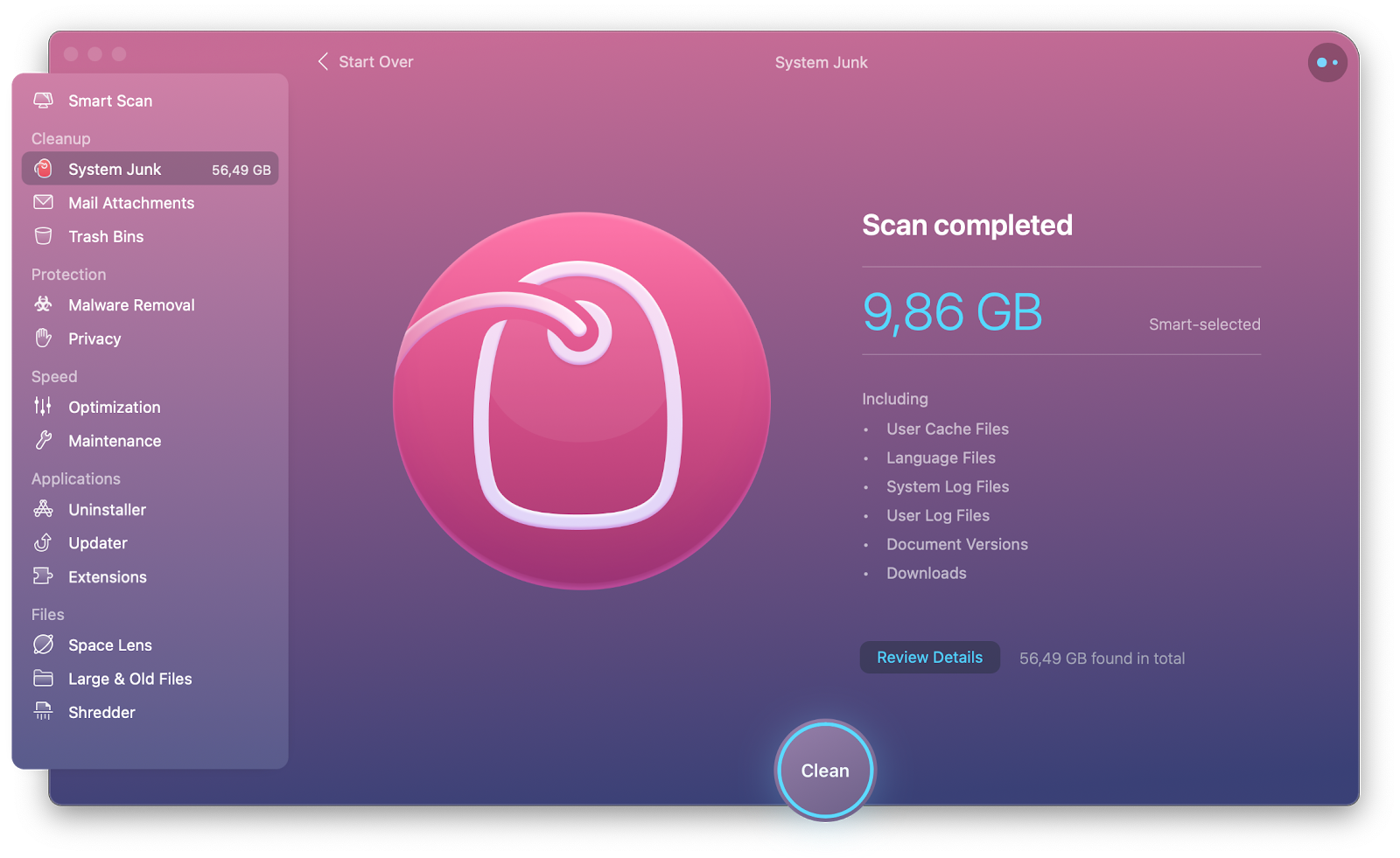 If you want a more thorough cleanup, use the Smart Scan feature. It removes the clutter as well as detects malware and optimizes your Mac’s speed and overall performance. Whether you’re new to Mac or a pro user, CleanMyMac X will give you a moment of bliss. Imagine how much time and effort you save by never having to free up storage manually!

Grab all the task solvers on Setapp

If you’re looking to improve your productivity and do more with a Mac, command-line package management is the right direction. Homebrew is one of the best free package managers that is relatively easy to use if you have some experience with Terminal. And if it’s not for you, you can work on boosting your work with tools like Gitfox and DevUtils.

Gitfox, DevUtils, and CleanMyMac X are paid apps, but you can try them for free with a Setapp subscription. Setapp is a subscription service for macOS and iOS apps. It introduces a whole new approach to using your device — instead of searching for apps, you type your task in Setapp and get the app that solves your task immediately. Try it for 7 days free,  then $9.99/month.

How to install Homebrew on Mac M1?

If you’re wondering whether the instructions from this article apply to installing Homebrew on an Apple Silicon Mac, we have great news. They do! The only difference with M1 Macs is that you’ll have to update the shell configuration after installing Homebrew.

Where does Homebrew install on Mac?

On Intel Macs, Homebrew installs to the /usr/local/bin directory, so you don’t need to take any extra steps to set it up. On Apple Silicon Macs, Homebrew installs to the /opt/homebrew folder. While it’s not part of the default $PATH, you’ll need to create a ~/.zprofile file that has a command for setting up Homebrew. You can find detailed instructions on how to do it in Homebrew’s documentation on the official website.