From running a specific program or game to needing to test the performance of something you’ve created on another operating system, there are various reasons you might want to run Windows on Mac.

One of the benefits offered by Apple laptops and desktops is that it’s actually fairly straightforward to run Windows programs on Mac alongside macOS in a couple of different ways. Despite the contempt some Apple users show towards Microsoft, installing Windows on Mac has been officially supported for more than 15 years.

Below you’ll find a detailed guide on which devices can handle dual-booting, how to get Windows on Mac up and running, and some of the pros and cons associated with using different methods of doing so.

You’ll also learn about some of the ways you can get Windows-like functionality from your Apple computer without the need to actually run Windows programs on Mac laptops or desktops that you currently own.

What You Need To Install Windows 10 On Mac

Although support has been in place for running Windows on Mac since 2005, you will need to meet a few criteria if you’re hoping to use Windows 10 on Mac via Boot Camp Assistant.

For a start, you’ll need to be running the latest OS and using one of the following machines:

You’ll also need at least 64 GB of free storage space, with 128 GB free space or more recommended, and a flash drive that has at least 16 GB of storage available for use (unless your model of Mac doesn’t require a USB drive to install Windows).

Finally, you’ll need a 64-bit copy of Windows 10 Home or Pro available on a disk image (ISO). It’s possible to download a Windows 10 disk image via Microsoft if you don’t have an installation disk, or if your version of Windows is on a flash drive, but you might need to create a disk image manually if you only have Windows on a DVD.

While the above requirements refer to how to install Windows on Mac using Boot Camp, they represent solid guidance for other methods like virtual machines too. If you try to run Windows using an old Mac or OS X then there’s a greater risk of incompatibility issues cropping up.

If you’re searching for an easy answer to the question of how to run Windows programs on Mac, Boot Camp Assistant has got you covered. Although there are ways to install Windows on Mac without BootCamp, one of the great things about using this dedicated macOS app is that it walks you through the entire process. 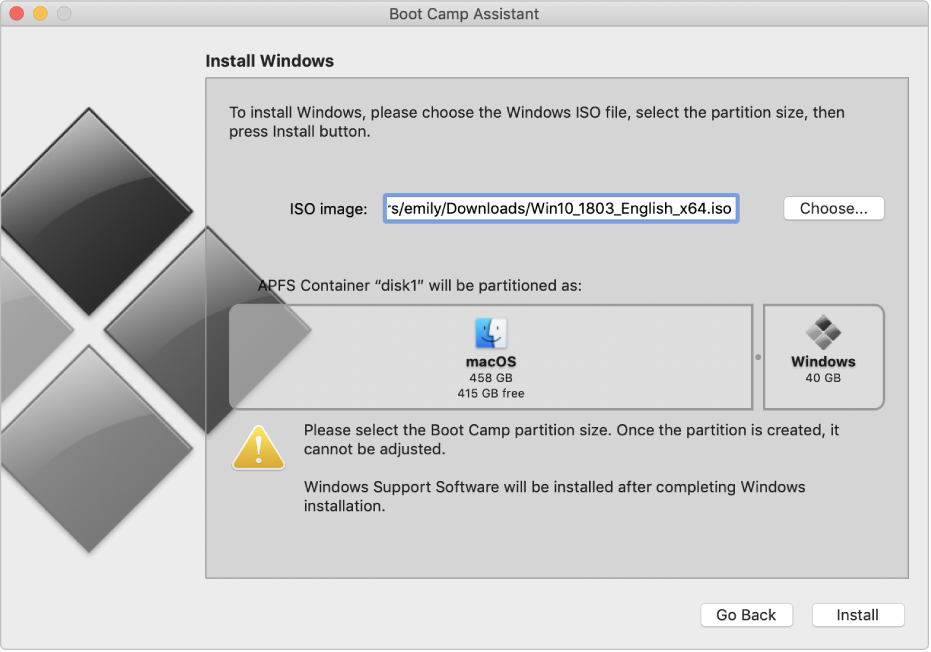 The ins and outs of how to install Windows on Mac using a virtual machine will differ a little depending on the solution you choose — Parallels, VMware Fusion and CrossOver Mac are three common choices — but the process is similar to using Boot Camp in some ways. 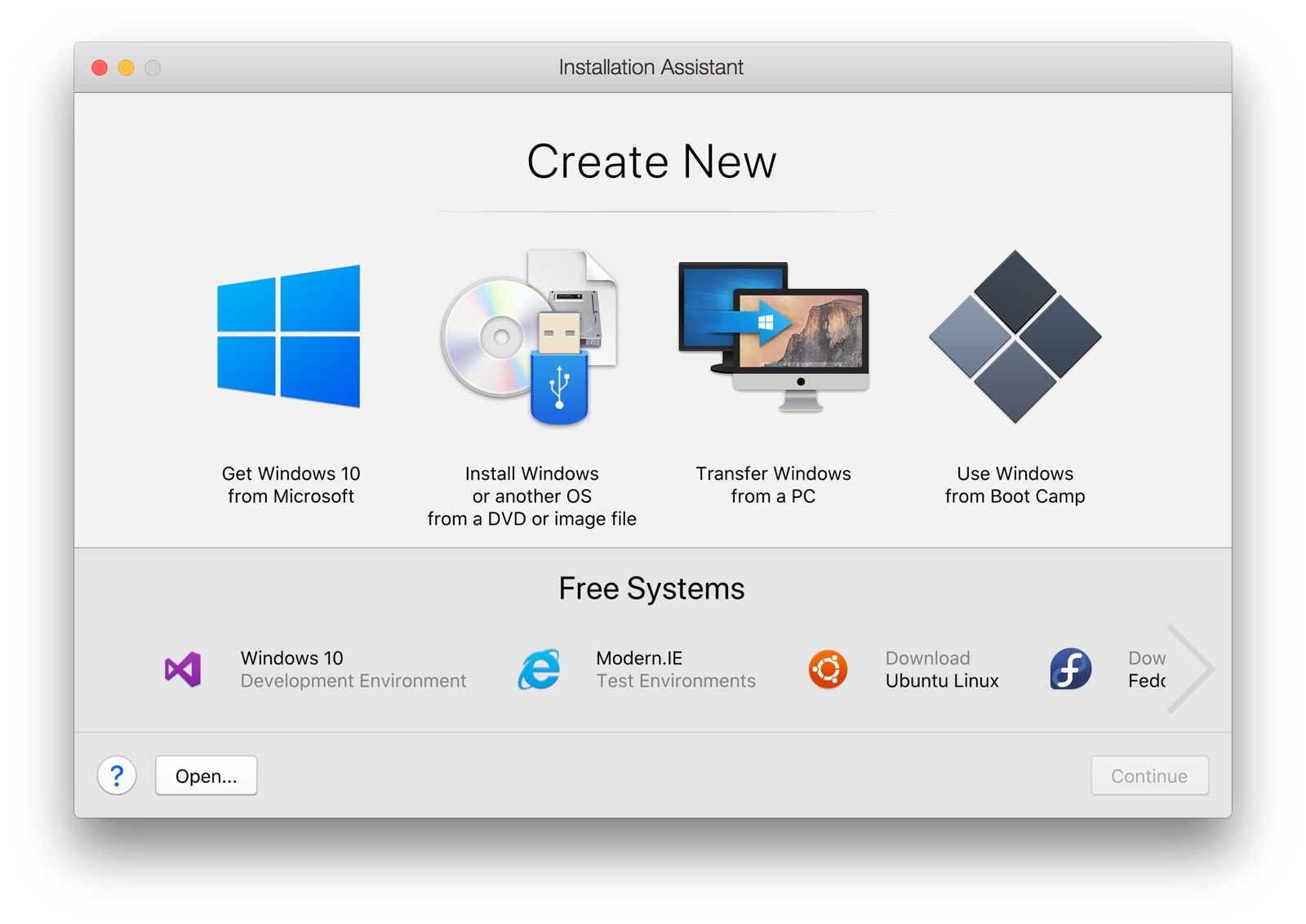 Comparing pros and cons of Boot Camp and virtualization

Perhaps the most obvious advantage of using Boot Camp is that it’s officially sanctioned and supported by Apple. As such, it represents the most well-documented and rigorously tested solution for installing Windows on Mac.

Also, when you run Windows on Mac using Boot Camp, you’re doing so directly on your hardware. This means it should be the quickest method too. It does, however, take up a lot of space — 64 GB minimum, 128 GB recommended — and requires that you re-partition your drive.

Plus you need to reboot your machine every time you want to switch between macOS and Windows, which isn’t particularly convenient. One obvious outcome is that running Windows on Mac and macOS apps simultaneously is impossible, which is something you can do when using a virtual machine.

VMs might be a bit slower than Boot Camp, but they take up a lot less space than the latter does. It’s also worth noting that Boot Camp is free (excluding the cost of a Windows license), whereas some virtualization software has costs associated with it.

Hopefully the above will help you to figure out which solution for how to get Windows on Mac is best for you. There is, however, a very real possibility of using some other options that will let you completely forget about learning how to install Windows 10 on Mac…

The question of how to run Windows on Mac can be tricky if you’re using an older Apple computer; Boot Camp isn’t a viable option for Windows 10 in this situation, and you might not trust your laptop or desktop to cope with running a VM.

Fortunately, there are various macOS apps out there that can accomplish the same things as popular Windows apps. Notepad++, for example, has developed a huge following among developers who primarily use Windows, but doesn’t currently have a version that’s available for Mac.

CodeRunner captures much of the magic of Notepad++ on Mac, with its smart and customizable interface for code editing. For the non-coders it also, as you can see below, makes for a clean and intuitive plain text editor. 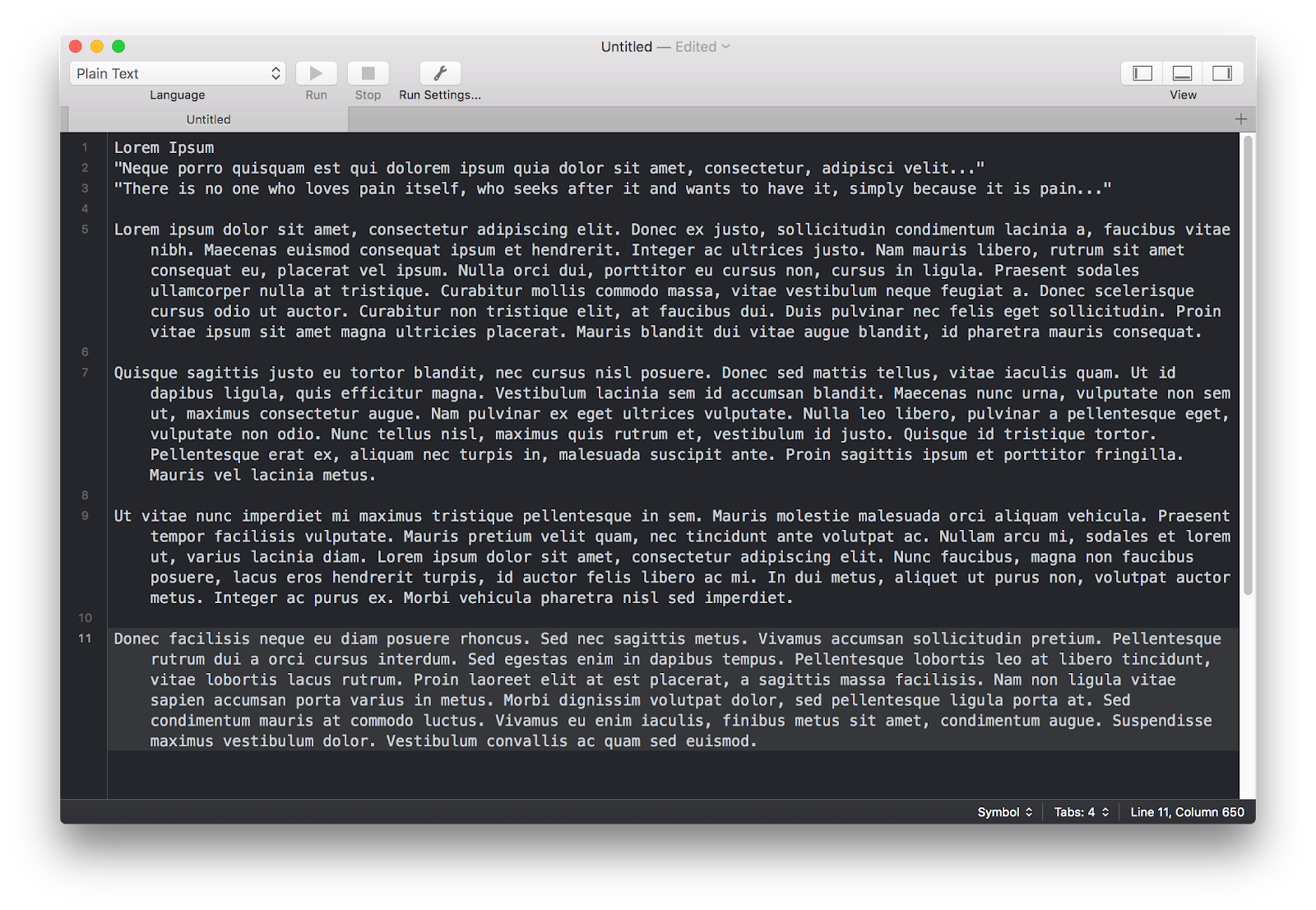 The app has a ton of useful features like:

It’s more than capable of holding on its own against Notepad++!

There is not currently, and has never been, a Mac version of Microsoft Publisher. Those who are looking for a desktop publishing app for Mac might find themselves scrabbling to source a suitable alternative.

Swift Publisher is a great option in this case, and offers a wide variety of useful presets to get started with. Choose from one of more than 300 different templates, covering everything from pamphlets to social media artwork, to work from or open up a blank document to start from scratch. 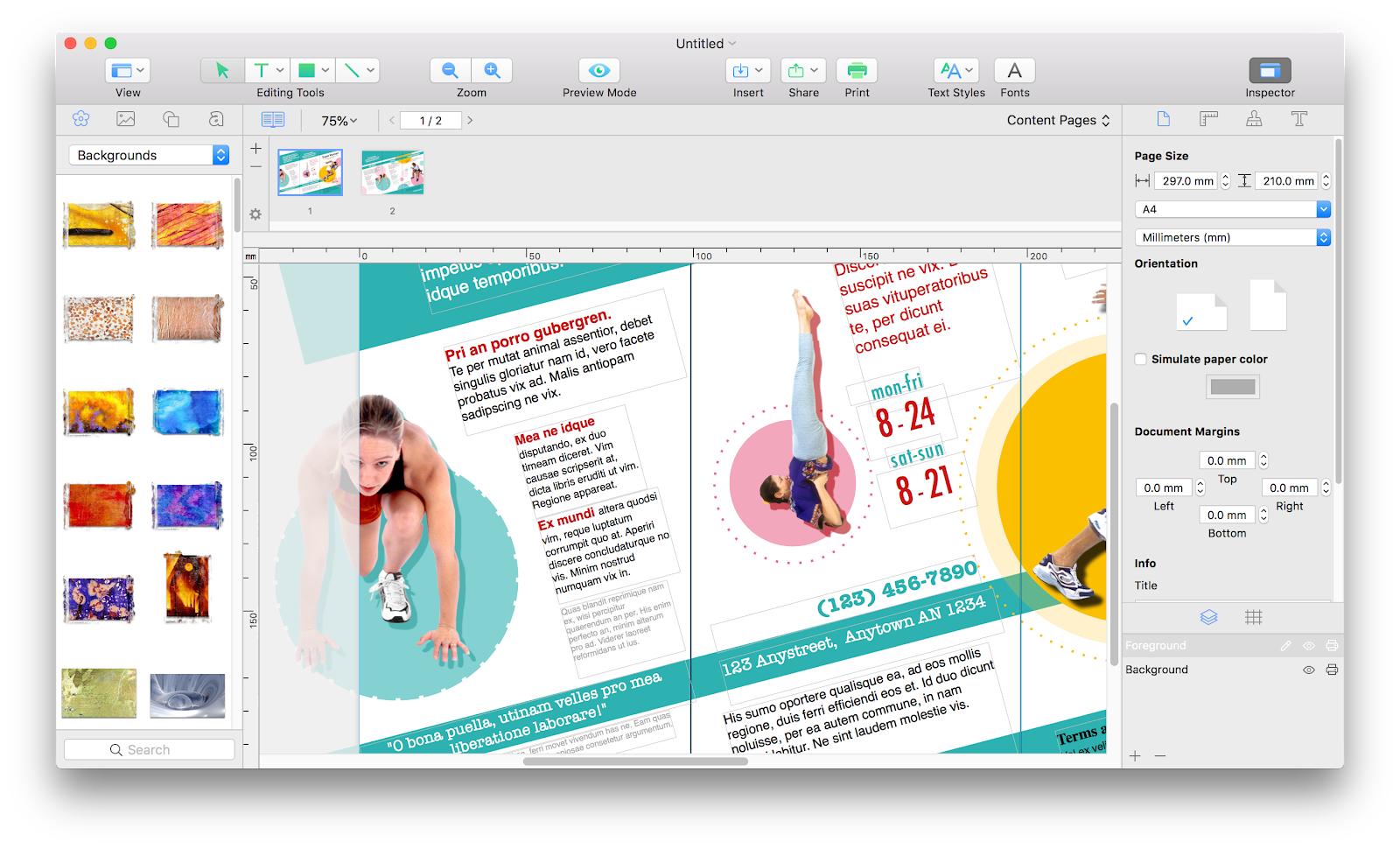 Swift Publisher offers a range of useful features including:

The app offers a really easy way to get a Microsoft Publisher-esque experience without the need to look into the details of how to run Windows on Mac.

Although Apple does offer direct alternatives for some Windows apps — TextEdit for Notepad, Terminal for Command Prompt, etc. — new Mac users are often surprised to learn that there’s no pre-loaded equivalent to Microsoft Paint in macOS.

Capto offers an intriguing proposition for those who are trying to find a Paint alternative, since the long defunct MacPaint is no longer an option. In addition to being an intuitive screen recorder and video editor, Capto’s image editing area includes freehand painting from scratch. 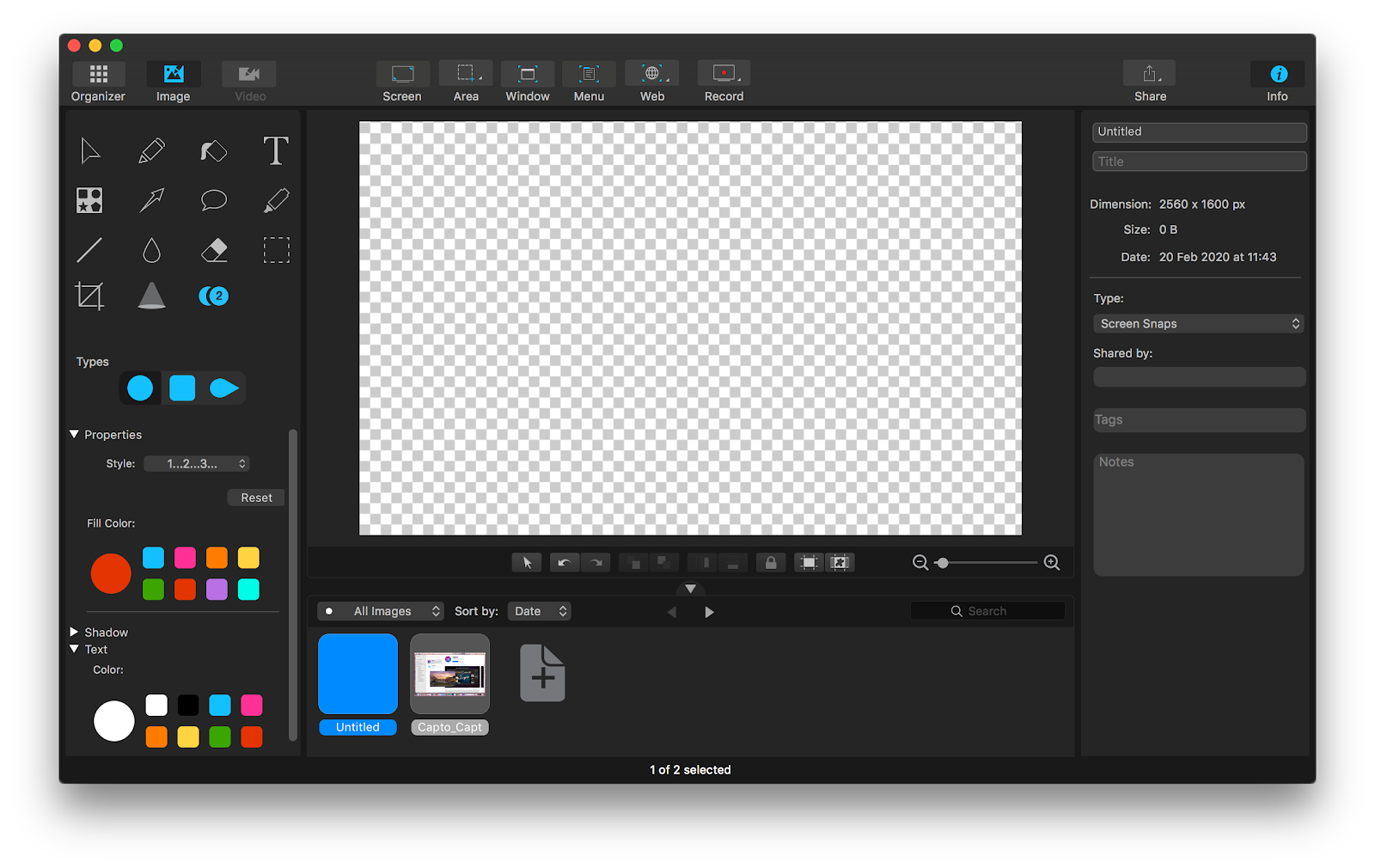 Some of Capto’s features include:

However, as you can see in the screenshot above, another major benefit of the app is that it offers many of the same options that MS Paint does. It might just be where you create your next masterpiece…

While it’s certainly possible to install Windows on Mac without BootCamp, or with it, you may find that there’s no need to go through the steps required to install Windows 10 on Mac because there are enough options out there to get around it.

Some people focus so much on making use of the tools that come bundled with their Mac that they forget about all of the developers out there building tools for macOS. As you can see above, it only takes a bit of creative thinking to ditch the question of how to download Windows on Mac and use alternatives that were built with Apple hardware specifically in mind instead.

To try all of the apps mentioned here — CodeRunner, Swift Publisher, and Capto — for free, grab a free seven-day trial of Setapp, a platform with more than 170 top-of-the-field Mac apps that offer truly great alternatives to running Windows on Mac.