The use cases for UML diagrams are seemingly endless. Named for the Unified Modeling Language (UML) they adhere to, UML diagrams are helpful for visually representing any kind of formal system you can imagine.

The UML diagram scheme is most often found in computer science for describing and documenting computer software. But what is UML? If you’ve ever seen a flowchart of how an application works and functions, that’s UML at its best!

When you think of this example, UML diagram methodology becomes clear. It helps visualize each role, what it’s responsible for, and what other dependencies it may have. In addition to software engineering, UML diagrams have found their way to more general office visualizations, including outlining a hierarchy of a company or team.

There are many reasons to use UML diagrams, both professionally and personally. Engineers rely on them often when onboarding new team members; the outline helps them understand what other teammates do, who is responsible for unique aspects of the project, and how the overall team works with one another. It’s also useful for diagramming codebases, as thousands of lines of code can be difficult to parse without some sort of visual guide.

Another important use case is building new products or features into an app or service. Rather than simply coding and seeing what happens, engineering teams can create UML diagrams to visualize how the new feature should work, where it’ll fit into the overall scheme of the app, and helps them foresee issues which may arise.

What are different types of UML diagrams?

There are roughly 14 different types of UML diagrams, which segment into two main categories: structural, and behavioral.

Structural UML diagrams, as the name suggests, focus on the structure of a system. As this is most often found in software engineering, a UML diagram for an app may be a visual walkthrough of how the code is structured, with folders and outside dependencies represented as unique items on the diagram.

There are the types of structural UML diagrams:

And the behavioral diagrams:

How to make a UML diagram

When making a UML diagram, you should first sketch out the entirety of the project by hand and list all of the components in the project, people involved, and the responsibilities of each. Knowing what each part of the process does, and who is responsible, is critical.

This is an essential step to making a UML diagram of any kind. You will need to know how complex the project is, and whether it can be simplified. Having a large, unruly diagram is not going to be helpful to anyone. It’s also a good practice that lets you understand how many charts you’ll need.

2. Consider how to structure your charts

In sketching out your workflow, it’s best to consider each object or step in the process, and whether any need additional charts.

An example: let’s say you’re building a UML chart for a team’s workflow, and one team member needs to pass things along to another, who then has a lot to do before they can pass the work along to the next step. The first object or person in this chart may not need another chart type to accompany their task, but the second person or object may need a detailed list of their work and dependencies.

It’s advantageous to keep charts as simple as possible, both in flow and structure. Where necessary, add charts that detail the work involved but aren’t mandatory. Not everyone who reads a chart needs all of the information associated with each step.

Now that you’ve decided on a workflow, chart structure, and where you’ll need to focus your attention, you will need to troubleshoot. Run through the rough draft of your chart with teammates, and take input on where things can be improved. Now all you need is a great UML diagram tool — and we’ve got a few that may work perfectly for you.

Regardless of the complexity of the UML diagram that you want to create, there are a few tools discussed below that would help you do so easily. Don’t even think about reproducing the UML diagram in a regular graphics editor — you’ll spend hours (or days) instead of minutes for no reason.

If you’re just starting out in the UML world and don’t need to build a very complex chart, try Diagrams.

Diagrams for Mac is a really simple app that helps you craft amazing UML diagrams in no time. It leans into the most popular UL diagramming type, class diagrams, which many users will find useful in most scenarios.

Here’s how to create a UML diagram with Diagrams:

Open Diagrams on your Mac. Download the app via Setapp, and open it on your Mac. The app will open in your Finder. Select “new document” on the bottom left to start a new diagram.

Click “add element.” At the top left of the screen, choose “add element.” This brings up a menu where you can select the shape and color of the first element for your new UML diagram. 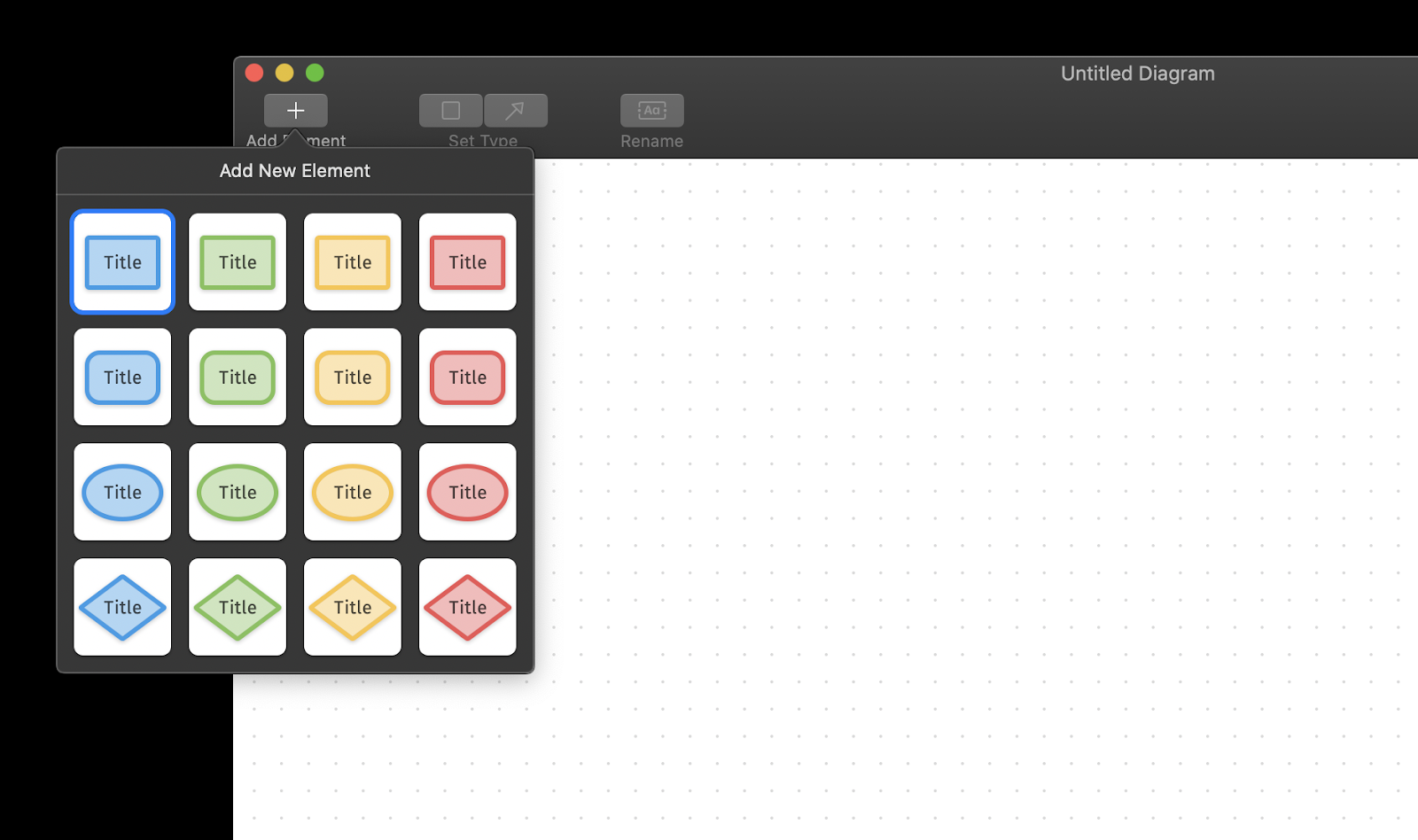 Name your element. You can simply double-click the element itself, or select it and choose the “rename” option from the top menu.

Add a relationship. Hover over your first element. You’ll see a line icon appear at the top right of your element. Click it and drag to the second element you want to link to, where you will also be able to choose the type of relationship it will have. You can also double-click this relationship to add a note.

Keep going. You can add other elements, and choose the shape and color that best represents each. This is also a great time to consider how the relationship display types should be represented; objects that have loose connections to others may require a dotted dual-arrow. If you make a mistake or decide to change things later on, you can always select the relationship arrow or line and choose “set type” from the top menu. 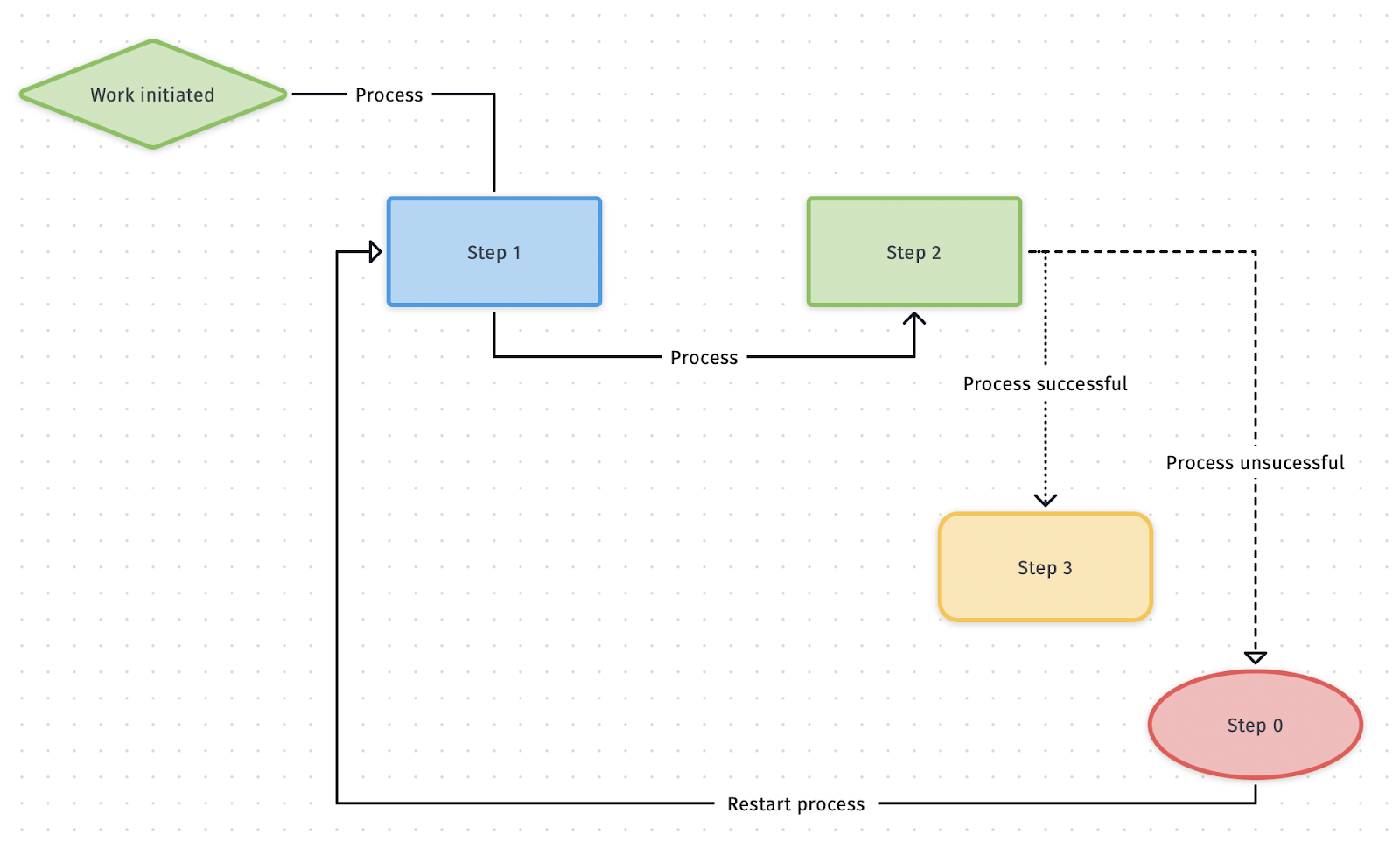 As you see in the example above, we’ve used Diagrams to create a thorough process for a simple process. Step 1 hands off to step 2 to complete the task; if it does, it hands off to step 3. If not, it goes to step 0, which re-starts the loop.

Within these steps, there may be additional diagrams. Step 0 may solve some problems in the process not identified earlier before handing back off to step 1, for instance. All of those additive pieces can also be created in Diagrams!

UML diagrams can be as simple or complex as you like. The key is to identify which you need, and why, before creating anything. It’s also critical to know which types of UML diagrams are necessary for each step as well as your larger workflow.

Diagrams is simple to use, easy to master, and exceedingly useful. It’s also available for free during a seven day trial of Setapp, the world’s best suite of productivity apps for your Mac.

In addition to Diagrams, you’ll get immediate and unlimited access to nearly 200 other amazing apps for the Mac. When the trial period ends, continued access to the full Setapp catalog is only $9.99 per month. It’s an incredible deal, so why wait any longer? Give Setapp a try now.