Get AnyDroid
Juggle data across Mac, iOS, and Android, easily.

It may come as a shock to many but, yes, there are actually Mac users out there who sport Android phones. In fact, since you’re reading the article, you might be one of them! And it could be a smart move.

Some good reasons for why people might use a Mac laptop or desktop with an Android smartphone instead of an iPhone include:

Of course, iPhone owners are spoilt for choice in that they can use AirDrop, Image Capture, iCloud, or the Photos app to transfer files between smartphone and Mac. Sadly, it isn’t quite so easy to transfer files from Android to Mac. Here, you need to get a bit more creative.

The “official” solution to this problem is using Android File Transfer, which will be covered in more detail below, but there are also various other workarounds and apps that can be used to connect Android to Mac, both wired and not. This article features some of the ins and outs of these methods of Android file transfer for Mac.

Get a tool for Android-to-Mac transferring

Install AnyDroid to sync files across Android and Mac, effortlessly. It comes with 240+ other Mac goodies you’re yet to discover.

The easiest way to transfer from Mac to Android

Similar to the way AirDrop allows connections between iPhones and Macs on the same network, there are apps that allow for wireless Android file transfer to Mac using WiFi or USB.

One such app is AnyDroid. Using it is simple:

That’s pretty much all there is to it! 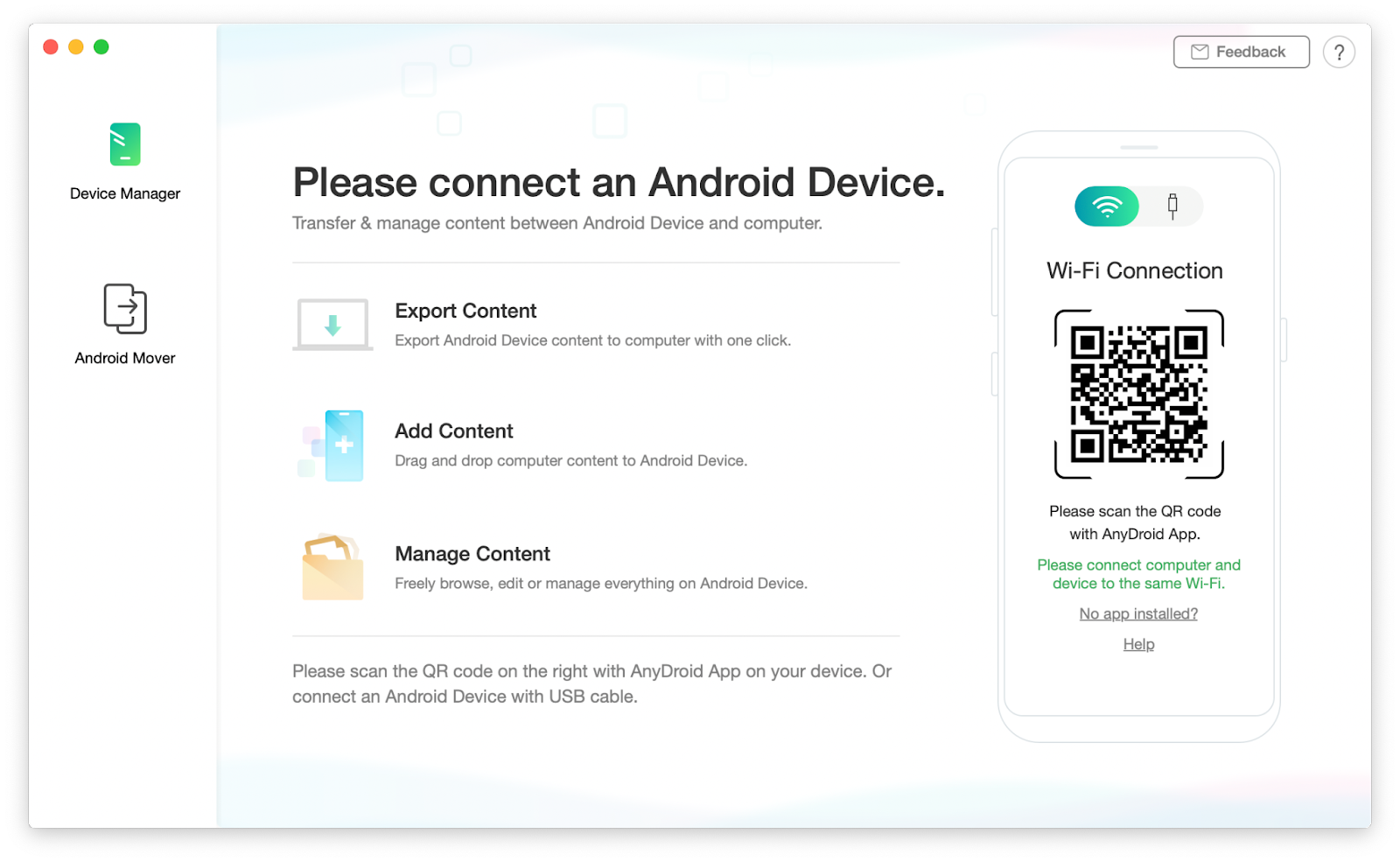 You can use AnyDroid to back up important files, move all of your data to a new Android handset (or iPhone) with a single click, or sync data across Android and macOS.

With options to manage files by category or connect via USB if you’re unable to get all of the relevant pieces of hardware on the same WiFi network, AnyDroid offers a thorough and organized approach to Android file transfer to Mac as well as some useful file management options.

You can also move your files from a Mac to an Android phone or tablet using Android File Transfer if the operating system on your Mac supports it — you need to run macOS 10.5 (Mac OS X Leopard) or later.

The benefits of using this method is you don’t have to rely on your internet connection since the transfer happens via a USB cable. This can be very convenient for large file transfers that can require a lot of bandwidth or for situations when your internet is spotty and can lead to interruptions with the transfer.

Let’s look at the step-by-step process below.

Once you’ve done that, it’s time to plug your smartphone into your Mac using a USB cable. Open AFT, if it doesn’t open automatically, and you can transfer files using the familiar Finder interface. 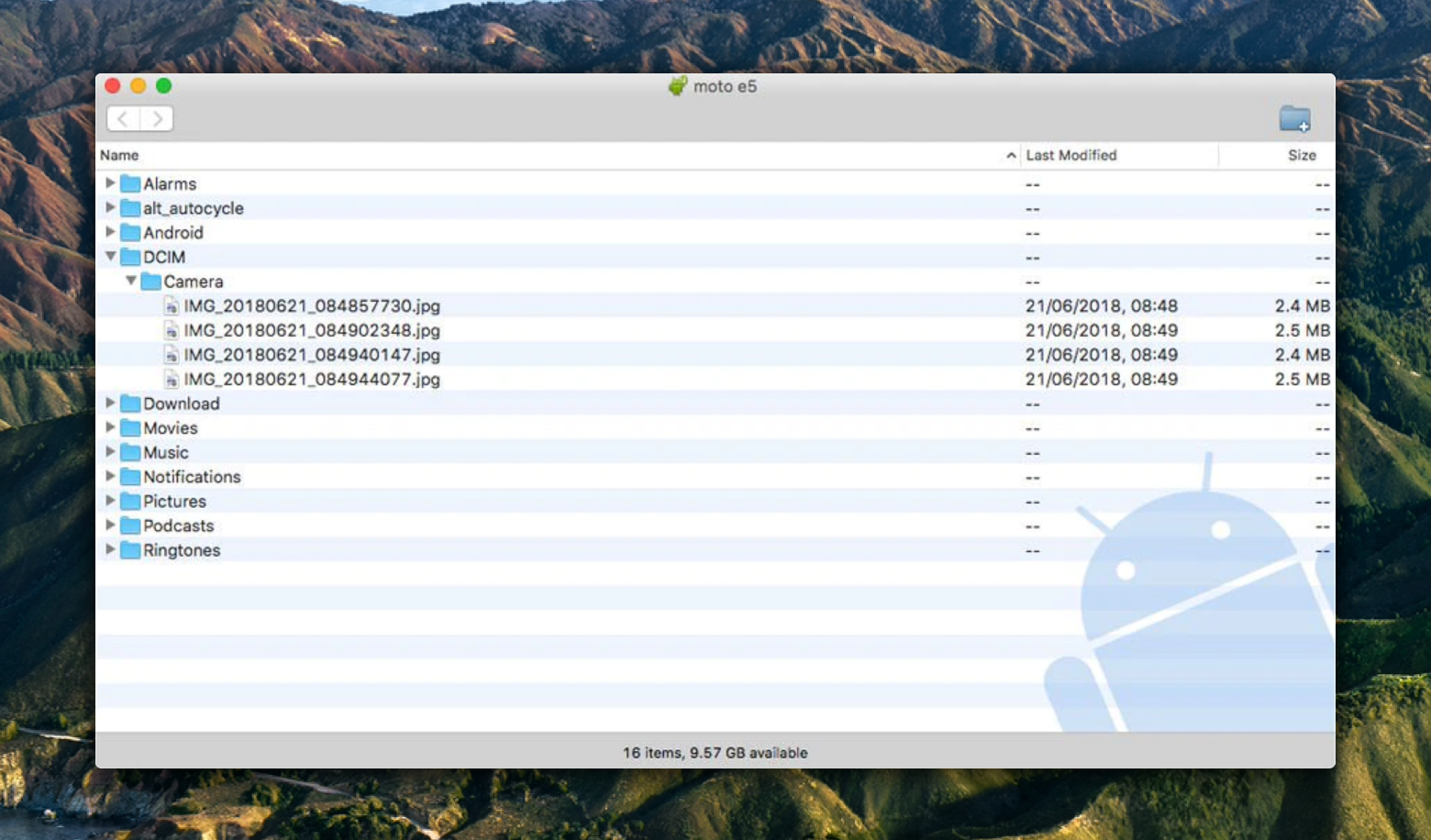 From there, using the app is pretty intuitive. The issue of how to transfer pictures from Android to Mac is the only thing that’s a little counterintuitive, as any images taken using your Android’s camera appear not in the Pictures folder but in DCIM ➙ Camera.

Now that we’ve covered how to transfer files from Android to Mac using AFT, we can address a big problem with the above: if you have a newer MacBook (i.e. one that uses USB-C), you won’t necessarily be able to connect your smartphone using your usual USB cable.

That means you’ll need to purchase either a new cable or adaptors to successfully test out how to move files on Mac from Android. That’s far from ideal, particularly if time and money are of the essence.

Fortunately, there are a few wireless solutions for how to connect Android to Mac without using Android File Transfer at all.

You can also use cloud services to transfer your files from a Mac onto Android. The process can be a little tedious, especially since you’ll have to transfer the files manually in most cases.

First off, choose a cloud service you’d like to use and review their pricing. Many popular cloud services offer some free disk space, e.g. you can use up to 15 GB of storage with your Gmail account. Besides the mail, the service allows you to store files on the cloud — Google Drive.

To access your files from an Android device, you can use either a browser or Google Drive app for Android. You can save the files on your Android phone or tablet or send them as attachments in Gmail.

Dropbox is another popular storage option, it allows you to store up to 2 GB of files with Dropbox Basic free plan. You can use Dropbox online or get the apps for your Mac and Android.

Dropbox certainly isn’t a solution that was designed specifically with transferring files between your Mac and Android in mind, but it’s one that quite a few people rely on every day, as it requires no extra tools to be downloaded.

If you already have a Dropbox account, you’ll probably already know how this process works. If not, here’s how to do it:

You’ll notice that, while this process is fairly simple, it’s not particularly well-suited if you’re trying to figure out how to move files on Mac in large batches from your Android. 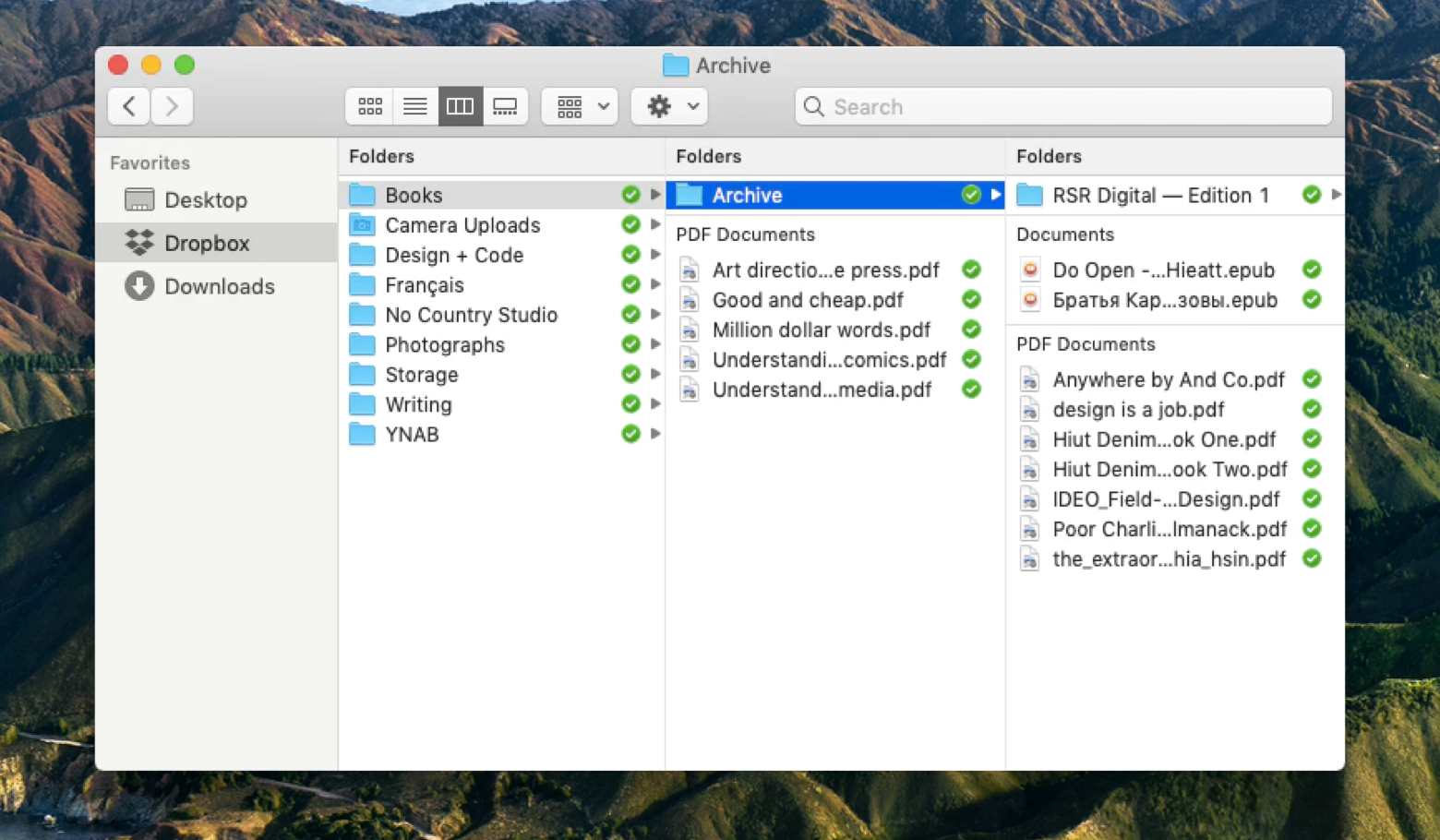 That’s even more true if you want to transfer files from Android to Mac of many different types at once (e.g. a Word doc, several images, and a video that all need to move over to your Mac for a use in a single project).

If you’re not a fan of Dropbox, or have simply never signed up for it, Google Drive is another alternative for Android to Mac file transfer. Steps on using it for the likes of how to transfer pictures from Android to Mac are pretty similar to those listed for Dropbox, except there’s no longer a dedicated Google Drive app for Mac. That means you would need to check out their Backup and Sync app for macOS instead.

Some people find Dropbox or Google Drive a bit clunky and end up joining everyone who googles “Android File Transfer not working on Mac” (the app is sadly known to be a bit temperamental). Luckily, there’s another option available. In fact, there are quite a few dedicated wireless apps for Mac to Android file transfer in existence.

The oddity of Windows and Mac rivalry

One of the biggest reasons why so many iPhone users have a Mac and so many Android users have a PC is that, in so many ways, Microsoft and Apple are still refusing to place nicely with each other in the way that many other hardware providers now do.

The relative difficulty of connecting Android to a Mac is one such example of this, although you may be surprised (or perhaps frustrated) to learn that connecting an iPhone to Windows is a significantly easier process thanks to iCloud, iTunes, and the Windows Photos app.

It’s very easy to become a victim of the war between Apple and Microsoft but there’s no reason to do so if you don’t want to choose one allegiance or are obliged to use an Android phone for some other reason.

Consumers are getting more used to mixing and matching products from different companies — Netflix, Hulu, and Amazon Prime coexist on a single smart TV — and it’s likely that combinations such as Android and Mac will become more common as time passes.

Dropbox or Google Drive offer a decent workaround if not, but a dedicated Android file transfer app like AnyDroid is hard to beat when it comes to making moving files from Android to Mac intuitive and organizable.

Best of all, AnyDroid is available to you on a free trial through Setapp, a platform of more than 240 best-in-class Mac and iOS apps that let you significantly expand the capabilities of your device and fill any functionality missing by default.