When a new Fitbit user gets their device out of the box for the first time, the typical instinct is to connect it to their smartphone right off the bat. What many don’t know, however, is that there’s also a Fitbit app for Mac.

So in addition to the well-known iOS app, which is consistently present in the top-5 of the App Store’s health and fitness category, you can use the Fitbit desktop app or web portal to track your activity.

Below you’ll find an easy-to-follow guide on how to sync Fitbit to Mac. One of the advantages of using the desktop app, rather than the mobile one, is that it eliminates the need for scrolling up and down when you want to get a complete picture at a glance.

Besides, there are other practical fitness tools and tricks that could help you build sustainable habits faster and perfectly complement your new device. After all, the more fitness-related products you try, the quicker you’ll get a clear idea of what works for you in terms of your new healthier lifestyle.

The Basics Of Fitbit For Mac

First things first, let’s look at the Fitbit Connect Mac offering under the assumption that you’ve chosen to use it to set up your device.

Unfortunately, Fitbit’s website assumes that most users will select a smartphone Fitbit setup, so the Fitbit app for Mac is hiding at the very bottom of the setup page.

Once you’re there, here’s what you need to do to connect to Fitbit:

The Fitbit Connect app allows you to get a complete overview, from how many calories you’ve burned and your step count through to your sleep habits and how your Fitbit friends are performing right now.

It’s also worth pointing out that, although you can’t pair devices using the web portal, you can access the pared back version of your dashboard there by logging in to your account on Fitbit’s main website.

In most cases, you’d definitely want to download the Fitbit Connect app to your Mac. However, the web portal offers a decent backup option in cases where a Fitbit Connect download isn’t possible (e.g. a work laptop).

How to pair Fitbit Charge 2 with iPhone

It’s possible that, for one reason or another, the Fitbit desktop app might not work for you. In that case, you can always ditch the Fitbit Connect Mac app in favor of the iOS version, to be used with iPhone or iPad.

The Fitbit setup process on your phone is pretty much the same as using the Fitbit Connect app on your Mac, with the only difference of having to enter a code displayed on your Charge 2 when you pair it with your iPhone.

As long as you’ve downloaded the Fitbit app and signed in, the question of how to pair Fitbit doesn’t require in-depth explanations. A few things to remember though if you’re using your iPhone rather than a Fitbit Connect download on your MacBook:

Although a Fitbit device is a valuable tool, it isn’t enough to change all the deeply ingrained habits on its own. If you really want to get healthier, it’s wise to pair Fitbit for Mac with other tools that will help you build new habits more effectively.

It also makes perfect sense to keep all your apps together on your Mac laptop or desktop. Once you’ve learned how to pair Fitbit with your Mac, it would be great to add some apps to level up your focus, reflection, and fun.

Use exercise to improve your focus

For many people, the idea of working out for hours on end every week is a serious deterrent — they feel there’s just no such time to spare. Breaking down fitness goals into smaller chunks can be really useful in this scenario.

Be Focused is a helpful app for simplifying and streamlining work patterns through encouraging periods of intense focus punctuated by regular breaks. In your case, you might use those breaks to move around and get some exercise in. 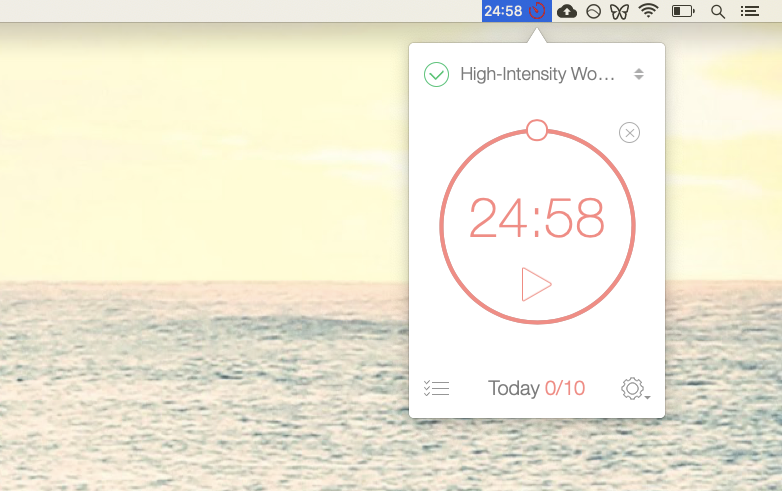 Just like Fitbit’s movement reminders, Be Focused encourages smaller bursts of activity so you don’t need to make space for workouts that might take an hour or more. To add a new task, make your way to the To Do area via the menu bar icon and enter the relevant information to spur you on before starting the timer.

Go inside any gym and you’ll see people scribbling personal bests or logging their reps and sets in beat up old notebooks. If you have access to your Mac while working out (or post-workout), you might find an app like Diarly to be a slightly more elegant solution.

Diarly props users to make a new entry every day, offered via a clean and customizable interface. Overall, the app lets you: 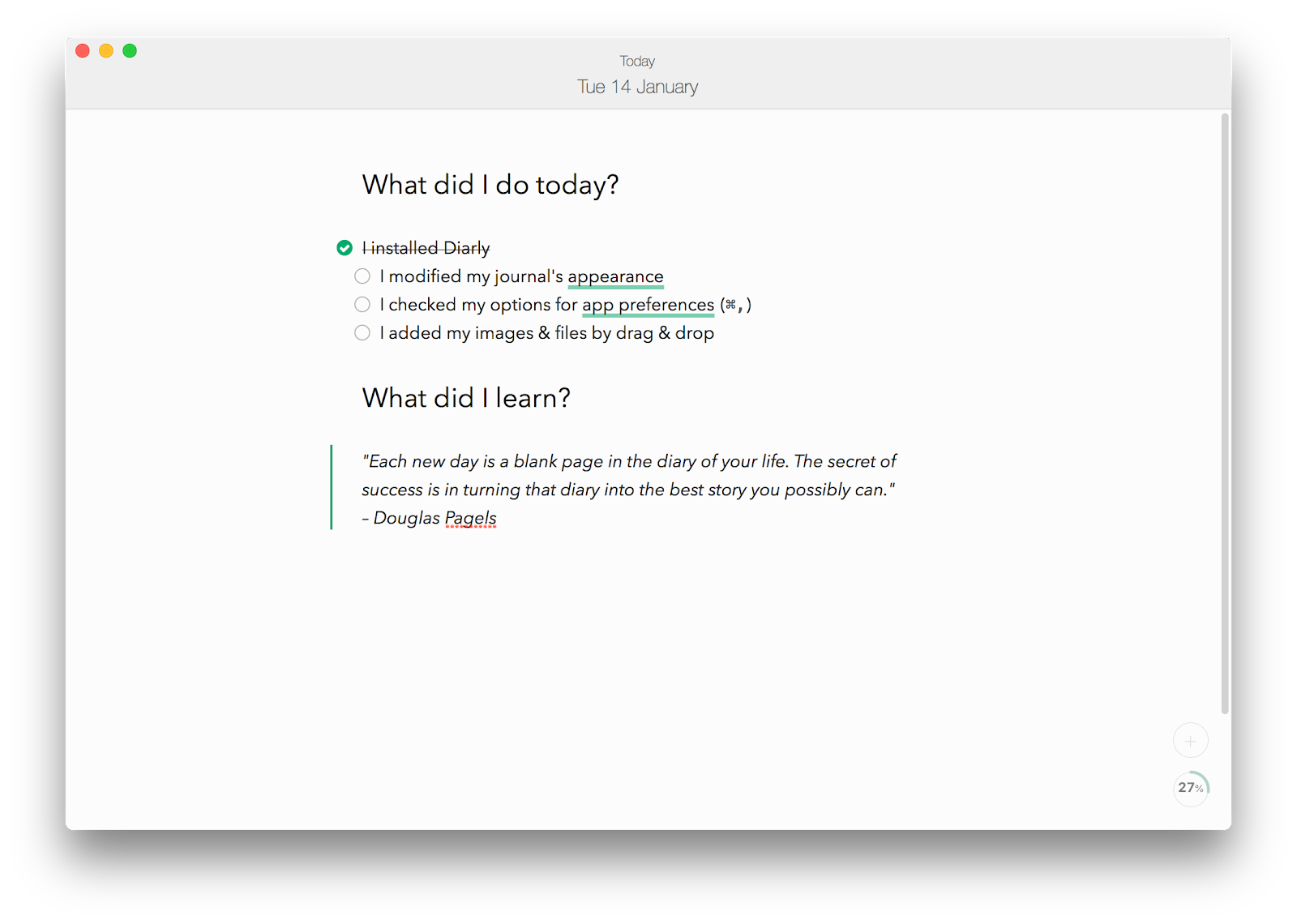 You can also create daily objectives and to-do lists, and then track your performance over time. Both of those features are really useful for monitoring trends and seeing how you progress in your workouts.

If you’re planning to create blog posts or Instagram roundups about the headway you’re making, taking notes in a diary or journal might be a particularly tempting proposition.

Don’t forget to make it fun

Whether you’re listening to a book on the exercise bike or searching for the perfect track to help you finish off that bench-press set, audio is a valuable tool for anyone looking to get (or stay) in shape.

If you’re lucky enough to have a home gym, or any other setup that lets you work out at home, using AirPods in tandem with your MacBook is a great way to leverage the power of music in fuelling your exercise habits without draining your phone battery.

ToothFairy makes connecting AirPods, Bluetooth speakers, or other devices to your Mac a breeze. To add a new device:

Once done, your chosen symbol will appear in your menu bar, along with its battery status. This will save you a ton of time fiddling around your Mac’s Bluetooth preferences, which you can instead spend getting hyped up for your workout.

The evolution of your Fitbit setup

As you can see, understanding the ins and outs of how to pair Fitbit Charge 2 (or other similar devices) with Mac and iPhone isn’t all that difficult. And as time goes by, it might become even easier than that.

Fitbit software on iPhone and Mac is already capable of searching for nearby devices that use Bluetooth. Analytics were also predicting that integration with Apple IDs could be a possibility in the near future, but after Google purchased Fitbit not so long ago, it’s more likely that Apple will focus on its own watch for now.

Still, Fitbit Connect works great with Apple devices and it’s unlikely that you’ll run into any issues while getting set up, especially if you follow the guide above step by step and also know how to pair Fitbit with other apps for an altogether healthier lifestyle.

Best of all, you can try all the apps mentioned above — BeFocused, Diarly, and ToothFairy — absolutely free with a seven-day trial of Setapp, a Mac platform with more than 160 useful apps for work, health, pleasure, and everything in between. Time to take your fitness pursuits to the next level!