Have you ever found yourself in a situation where you needed to type an accented character on Mac and didn’t know how?

Letters with accents are not as common in English, so you might be able to get away with it for some time. Although, it feels great to write things correctly: café, résumé, naïve. If you read the New Yorker, you’ve certainly seen diacritical marks on words like coöperate, which are used to avoid ambiguity in pronunciation.

Once you venture into other languages, such as Spanish, French, or German, knowing how to type accents on keyboard becomes imperative, since words might take a different meaning otherwise.

So it’s better to know the most common accent codes and how to add them quickly. Let’s explore a few ways of doing exactly that.

How to do letter accents on Mac

Letter accents, often called diacritics or diacritical marks, are most commonly placed over vowels, such as é, ô, ï, ü, etc. However, some languages use them for consonants too, like š, ç, ñ, etc.

Some diacritics are optional, but ignoring others can be akin to not finishing writing a letter. It’s just better to know them and to follow the rules. Especially, given that typing Spanish and French accent marks is so easy once you know how.

Get helpful writing apps for your Mac

In this article, you’ll find three quick ways of how you can enter letters with accent marks. Let’s dive in.

How to type accented letters using the accent menu

The accent menu can be called upon in most situations where text input is required. When typing, try to press and hold the letter to which you want to add an accent. A small menu with an available selection of accents will appear above, each with a corresponding number. Press the number you need on the keyboard (e.g., 1, 2, or 3), and the accent will be added automatically.

What’s great about the accent menu is that it only shows you the available variations of any given letter and it works in most text editors or forms.

However, sometimes, especially on the web, the accent menu is restricted. And your typing speed will definitely slow down overall.

To save time and make your life easier, try Rocket Typist, the app that lets you save snippets of text and then paste them into any document when you need them.

You can choose the saved phrases from a drop-down menu or even set them to appear automatically, when you type an abbreviation.

The app is also great for those times when you can’t remember a keyboard shortcut. 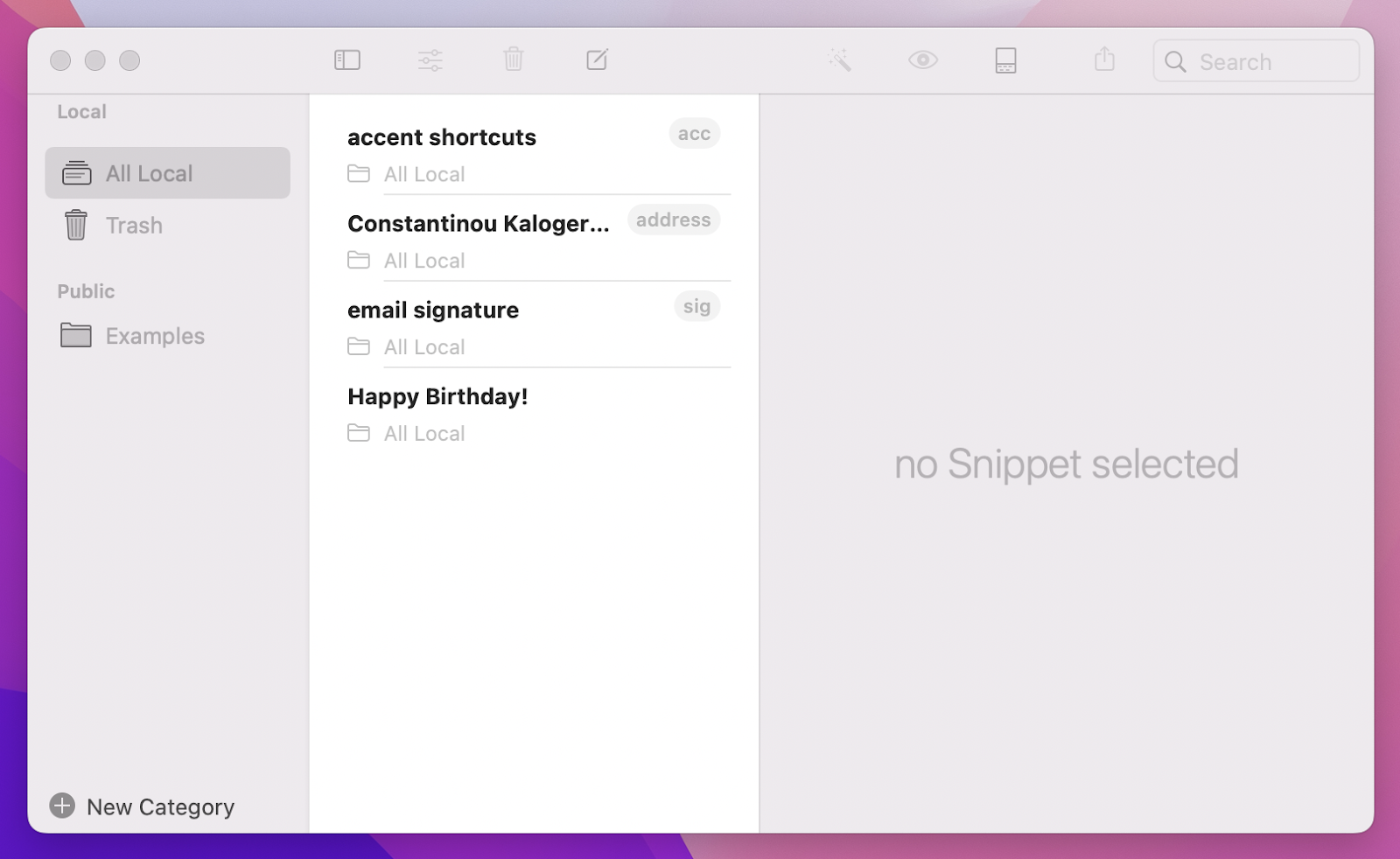 How to use dead keys for typing accented characters regularly

If you find yourself regularly typing French or Spanish accents on keyboard and want to do it faster — you can try typing with dead keys.

Dead keys are basically alt codes for accents. If you type Option + E, you’ll see an acute accent (´) appear, then simply type any letter that fits that accent to add it (e.g. “e”).

Adding Spanish or French keyboard accents with dead keys can be very fast. The challenge is remembering the key combinations for each accent:

Some other special characters, such as cedilla (ç) and ß can be typed with Option + C and Option + S respectively.

As long as you remember these Option variations, you can be typing accented characters with no delay at all.

How to type accents with Character Viewer

The last way to write special characters is with French or Spanish accents copy and paste from the Character Viewer.

Character Viewer is a default macOS utility with a menu of the most supported characters and character variations, including emoji, math symbols, punctuation, currency symbols, and more.

Another option is to:

When you have a Character View menu open, you can browse or search for the character you need, find an accented variation of it, and then either copy it with the right click of the mouse or double-click on it to paste.

As you can see, it’s possible to add accents on Mac in quite a few ways. Still, in some cases, your typing speed may significantly slow down. If you want to save time and make your life easier, take advantage of Rocket Typist, the app that lets you save snippets of text and then paste them into any document when you need them.

The tool is available to you absolutely free for 7 days through the trial of Setapp, a platform with more than 240 Mac and iOS apps across various categories, from translating anything with Mate Translate to writing and publishing with Ulysses. Try every Setapp app at no cost today and realize the full potential of your Mac.