When it comes to symbols on Mac, hyphen (-), or dash, is surprisingly helpful. We use it to hyphenate words (hence the name), draw arrows (->), and create mathematical equations (4 - 2 = 0).

However, we often use it where other, long dash symbols would work better — often because we're not sure how to type long hyphens at all. Sometimes, you can see people typing double (- -) or even triple (- - -) dashes to represent en and em dashes respectively (and some word processors even facilitate it) — but this approach won't save you everywhere.

Choose from among cool apps that let you customize how you type symbols on Mac. It's free, try on Setapp!

The crux of the matter is, every serious writer should know how to type an em dash on the keyboard efficiently. So here's a guide to what is a hyphen, an en dash, and em dash, and what are some essential en and em dash shortcuts you should know.

When To Use En Dash And Em Dash On Mac?

When you start researching en dashes and em dashes, you often find this notion that they correspond to the width of n and m letters. This is an interesting theory, but sadly untrue. To be more precise, the width of an em dash is more aligned to the width of the capital H, and en dash is about half that.

As for the names, en and em were terms used by traditional printers, with em representing the size of a piece of type vertically, and en being half of it. To transfer that to digital a 12pt font would have a 12pt em dash, although most digital typefaces now run shorter than that.

There are two main uses of en dash:

The em dash is primarily used to break the sentence in parts, either for a separate commentary, similar to parentheses, or to provide more context to an idea, similar to a colon.

How to use dash keyboard shortcuts

On Macs, the long dash symbol situation is much easier.

The only problem is that to use these en and em dash shortcuts effectively, you need to remember them. And when there's so many other shortcuts you keep in your head on a daily basis, it might be difficult to do.

Tip: Generally, you don't offset en and em dashes with spaces around them. However, if the text looks cramped, inserting a single space on each side could make it look better and more legible.

How to call up a Character Viewer panel

In reality, you don't just deal with two special characters like en dash and em dash — there are hundreds that you might need to use occasionally, from currency icons to emoji.

To access all of them, your Mac has a special menu called Character Viewer, which contains all the special symbols you might ever need.

Once you open Character Viewer, you can browse for the symbol you need or use the search. Type in "em dash" and all the applicable results will come up. To insert any symbol into any document (e.g. in Google Docs or Microsoft Word), just double-click on it.

Overall, Character Viewer is quite good and gets you what you need most of the time. However, not all the icons are present, which might sometimes leave you feeling constrained. In addition, sometimes you might not know what a certain symbol is called. How do you find it then?

Glyphfinder takes everything that's good in Character Viewer and amplifies it by 10. This little app hosts more than 34,000 characters accessible to you in semantic fashion — so just describing the icon visually would bring it up in search. Double-clicking on the symbol will copy it to your clipboard so you can paste it anywhere. What's more, Glyphfinder is just as easy to access — it lives in your menu bar but can be called up any time by pressing Control + ⌘ + G. 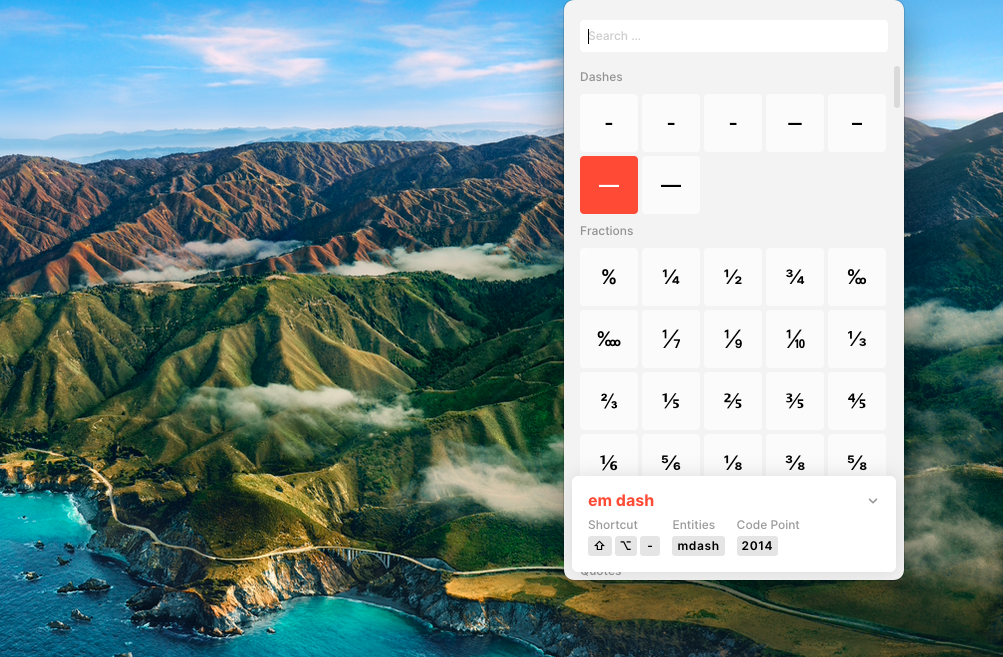 How to auto-replace en and em dashes on Mac

The third strategy of typing out long hyphens is to auto-replace a predetermined sequence of characters with them — basically create your own shortcut!

We mentioned above how some apps already automatically substitute a double hyphen (- -) with an em dash (–). But it's not supported everywhere. And you might not like to use this key combo specifically. So a better solution is to create your own shortcuts.

There's a limited way for creating shortcuts on Mac: 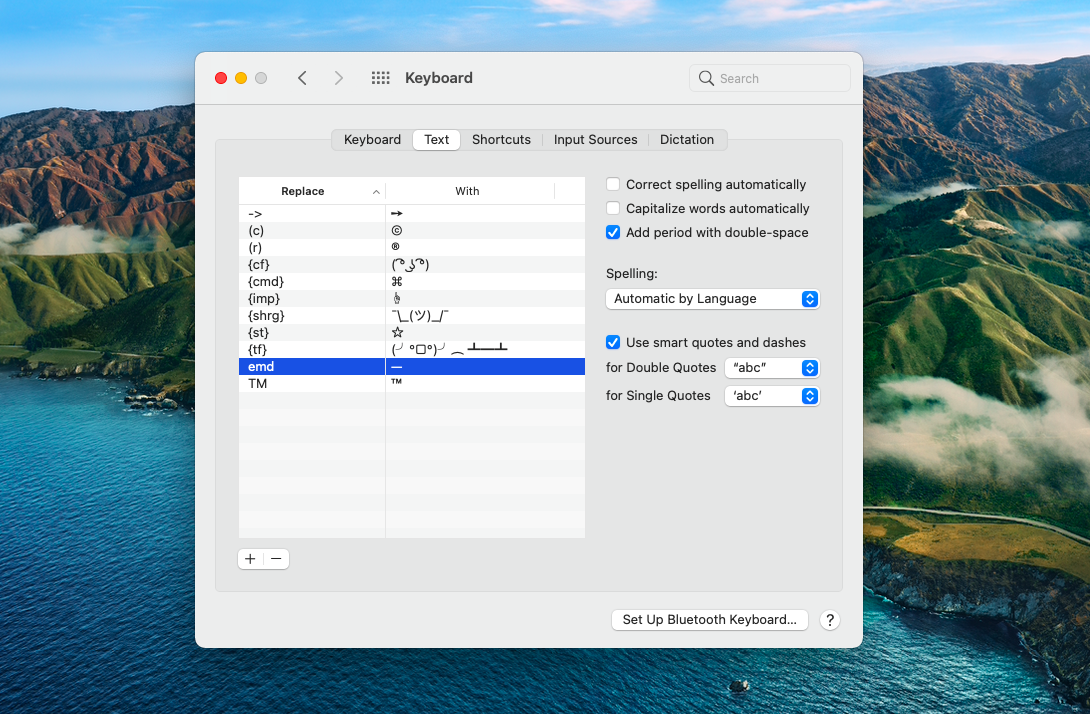 That's it. Now every time you type emd, it will automatically convert into an em dash. And it works across your iCloud devices! Repeat the process with an en dash. The only limiting factors here are the flexibility and length of your messages. So if you like this shortcut technique, it'll probably serve you better to upgrade to something like Rocket Typist.

Rocket Typist is a text expander of another caliber. This is the app that ensures that you never have to type the same message twice. You can create templates of any complexity (think changing names, dates, or other variables) and call them up using simple phrases in any app.

Here's how to create a simple em dash shortcuts with Rocket Typist: 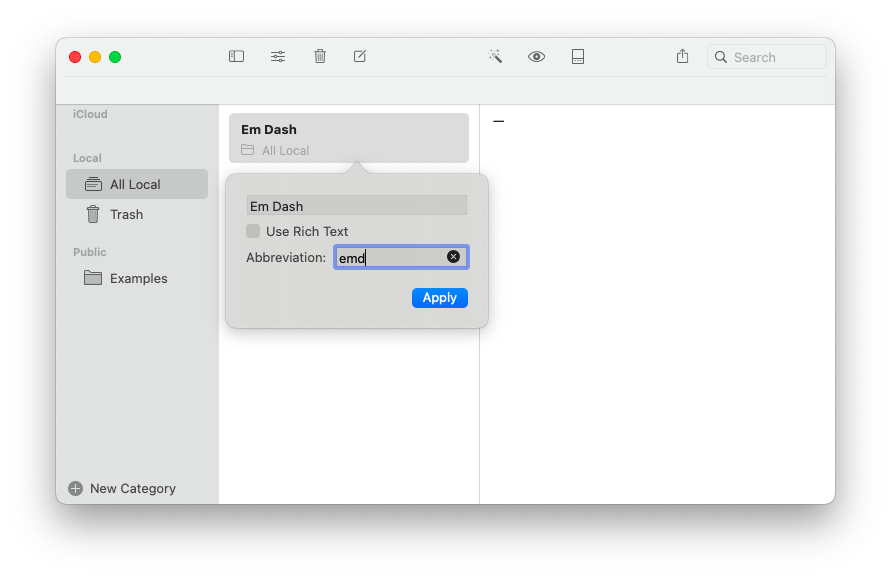 Now anytime you need the message to appear, just start typing the abbreviation for it. Rocket Typist, however, is not the only app you can use to generate all sorts of shortcuts. You should also try BetterTouchTool.

BetterTouchTool gives you complete control over all the input devices on your Mac, be it your keyboard, Touch Bar, mouse, trackpad, or even your iPhone. You can record specific sequences to produce certain results. You can rewrite the default behavior of input devices. Sky's the limit!

For example, to type an em dash on Mac with BetterTouchTool: 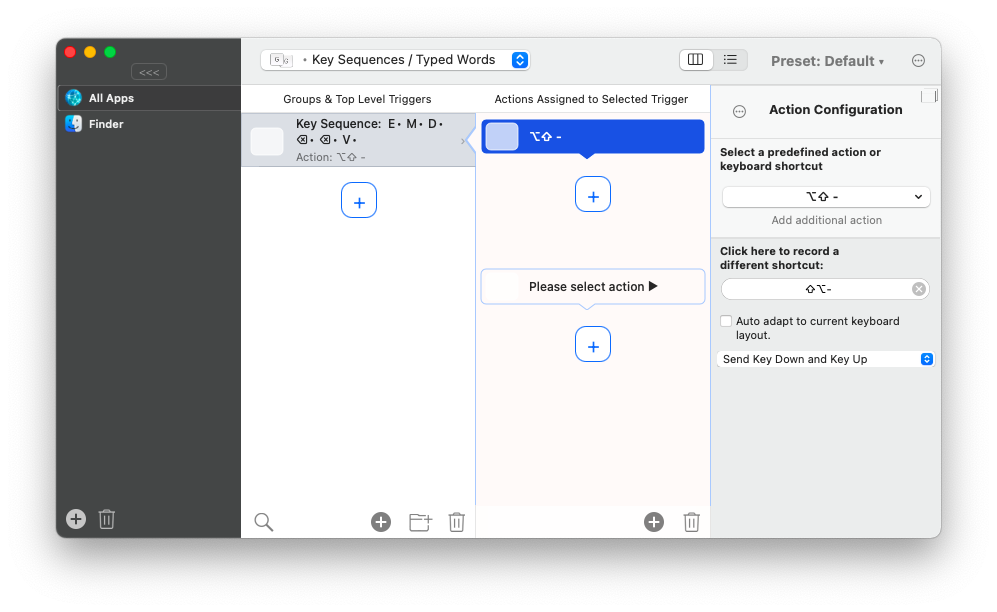 Another powerful shortcut-creating app that is a must for more complex sequences is Keysmith.

Keysmith is not just for simple shortcuts — it's a full-on platform for creating macros of any difficulty. The app allows you to record your actions across multiple apps, including what menu options you chose, where you click, what you type, etc. Then you can simply set a hotkey to repeat the sequence at any time. For example, you can use Keysmith to run a macro that opens all the apps and websites you need as soon as you start working. ; 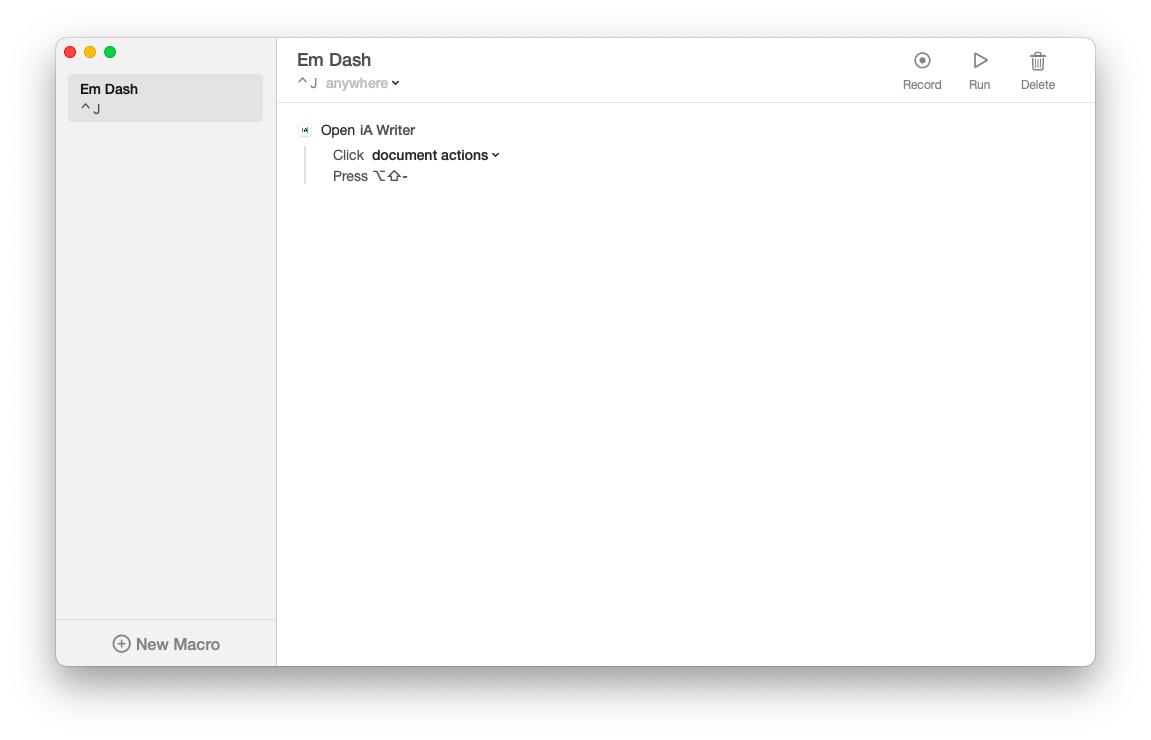 As you can see, there are limitless possibilities when it comes to figuring out how to type em dash on Mac. You can use default system shortcuts, you can paste symbols from Character Viewer, and you can auto-replace some symbols with others in System Preferences. But, even better, you can find any symbol you need with Glyphfinder, you can create a snippet with Rocket Typist, you can re-assign any keyboard shortcuts with BetterTouchTool, or you can come up with sequences of any complexity with Keysmith.

Best of all, Glyphfinder, Rocket Typist, BetterTouchTool, and Keysmith are available to you absolutely free for seven days through a trial of Setapp, a platform with more than 200 outstanding Mac apps for any task at hand. Try every Setapp app at no cost and be surprised at how you can expand your Mac system defaults.