As this troubled year is coming to an end, all we want is to breathe out and relax. Many expected, they would relax with a controller in their hands, playing what seemed to be the most promising game of the decade — Cyberpunk 2077. But hey, it’s still 2021. So it all just went off the rails, again. Instead of becoming a best seller, the Cyberpunk game became one of the biggest debacles of the year.

What happened and can we say Cyberpunk is still worth playing? If yes, what tools can you use to have a better gaming experience? This guide will help you make up your mind about the Cyberpunk game and (maybe) even save your Christmas.

Cyberpunk 2077 is a video game by a Polish developer CD Project Red. They are the company behind Witcher, deservedly named one of the greatest games of all time. Because, well, Netflix wouldn’t create a TV show based on a video game unless it were remarkable.

A huge success of Witcher 3 (over 28 million copies sold) raised the bar for CD Project Red’s new game. 8 million pre-orders and 8 years of development — gamers all around the world have been super excited about the Cyberpunk release. After a few delays, the game finally debuted on December 10, 2020. And people are not happy with it, at all.

Cyberpunk 2077 is based on a dystopian tabletop game by Mike Pondsmith first released in 1988 (the most popular editions are called Cyberpunk 2020 and Cyberpunk Red). Announced back in 2012, Cyberpunk 2077 features an open-world story set in a dystopian future, which is supposed to be the continuation of Cyberpunk 2020. The players get extensive character customization (even body modifications), a mesmerizing night city setting, voice work by Keanu Reeves, and more. So how did it go wrong?

The game is just way too glitchy — to the extent that it’s barely playable. YouTube is packed with “best Cyberpunk bugs and glitches” videos. If you want to see for yourself whether you can put up with all of this, we suggest you watch a few of them. Of course, some of the bugs have already been fixed but you’ll still get a pretty good idea about both Cyberpunk Xbox One issues and PS4 problems. As it often happens, Mr. Elon managed to sum it all up for us in one comment he had pulled from Reddit: 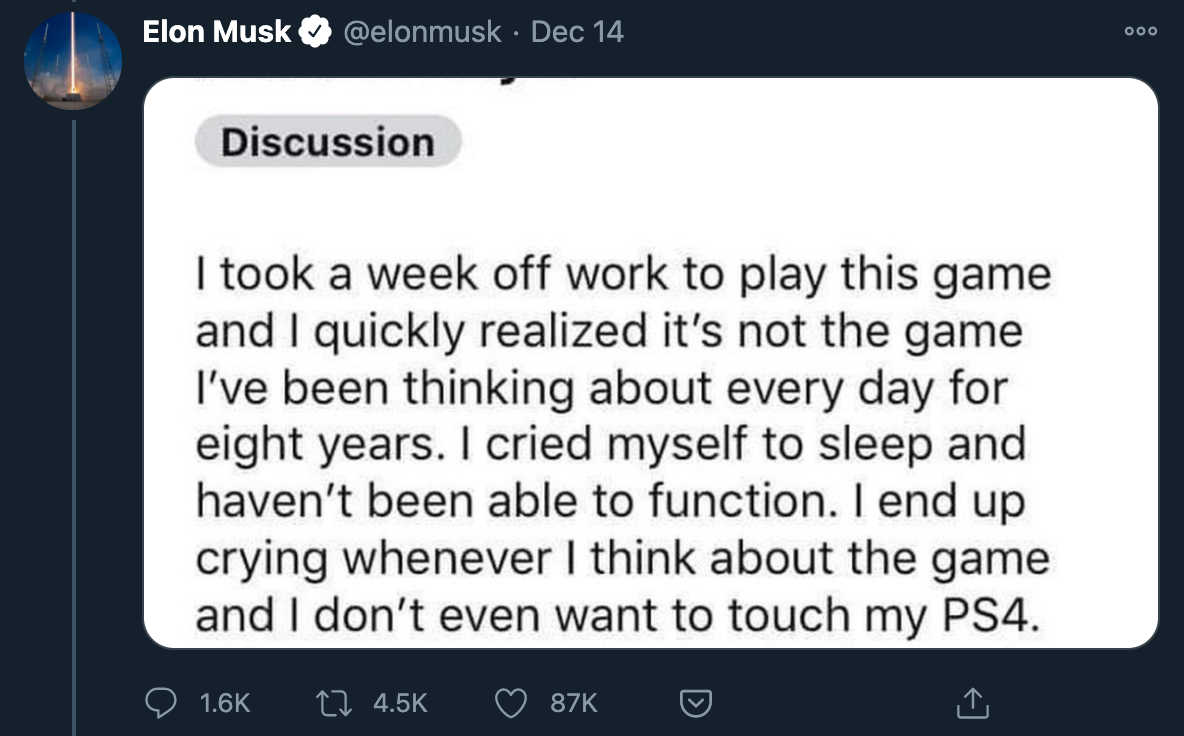 What’s the company’s response? Because of the Cyberpunk problems, the founders already lost around $1 billion and the CD Project Red stock fell 40% since the release. Players around the world hold off buying Cyberpunk and the refund requests are pouring in. So the future looks pretty dark. But the creators don’t give up and release new patches to address the bugs.

Here’s how the Cyberpunk 2077 story has unveiled so far:

Does it get better with new hotfixes?

The game creators are desperate to get rid of the glitches, obviously. They keep releasing hotfixes to squash as many bugs as possible. The most recent hotfix 1.05 brought some improvements to consoles. According to the reviews, players get a 2X better frame rate in some scenes on Xbox One X, there is a boost in graphics and enhanced performance on PlayStation 4. The glitches are still pretty bad but there’s clearly some progress.

How to get Cyberpunk 2077 refund

If you’ve purchased the game and you hate it, you’re not alone. As we’ve mentioned before, there’s a refund policy in place that guarantees you can get your money back. There are different ways to request a refund, depending on where you bought the game.

Here’s how you can request Cyberpunk PS4 refund:

Here’s how to request a refund if you bought Cyberpunk on the Microsoft Store:

If you purchased the game for PC on online stores like Steam, Epic Games Store, or GOG, here are the links to their refund request pages. Note that in the case with Steam, you can only request a refund up to 14 days after the release.

David Dawkins who recently interviewed one of the co-founders for a Forbes article concludes that “corners were cut to launch in time for holidays.” Obviously, the company still needed some time to perfect the game but the decision to release was made, and there’s been no turning back ever after.

There have been some rumors about Cyberpunk 2077 developers problems. Reportedly, they complained about unrealistic deadlines and numerous challenges they faced in the attempt to make the game “playable” before the launch date. Chances are that had CD Project postponed the release and took some time to fix the bugs, Cyberpunk 2077 could become the best-selling game everyone expected it to be.

Why you should give Cyberpunk 2077 a chance

Let’s look on the bright side. First, “Cyberpunk 2077 meme” will probably be one of the funniest threads on Reddit. People have fun sharing the most hilarious Cyberpunk bugs and glitches all over 9GAG and Twitter. To prevent the wave of backlash and anger, the company is ready to give all the players their money back (you can get a PS4 refund or an Xbox refund in a matter of days). The hotfixes are effective and there are some improvements. But most importantly, people appreciate the fascinating storyline despite all the bugs. 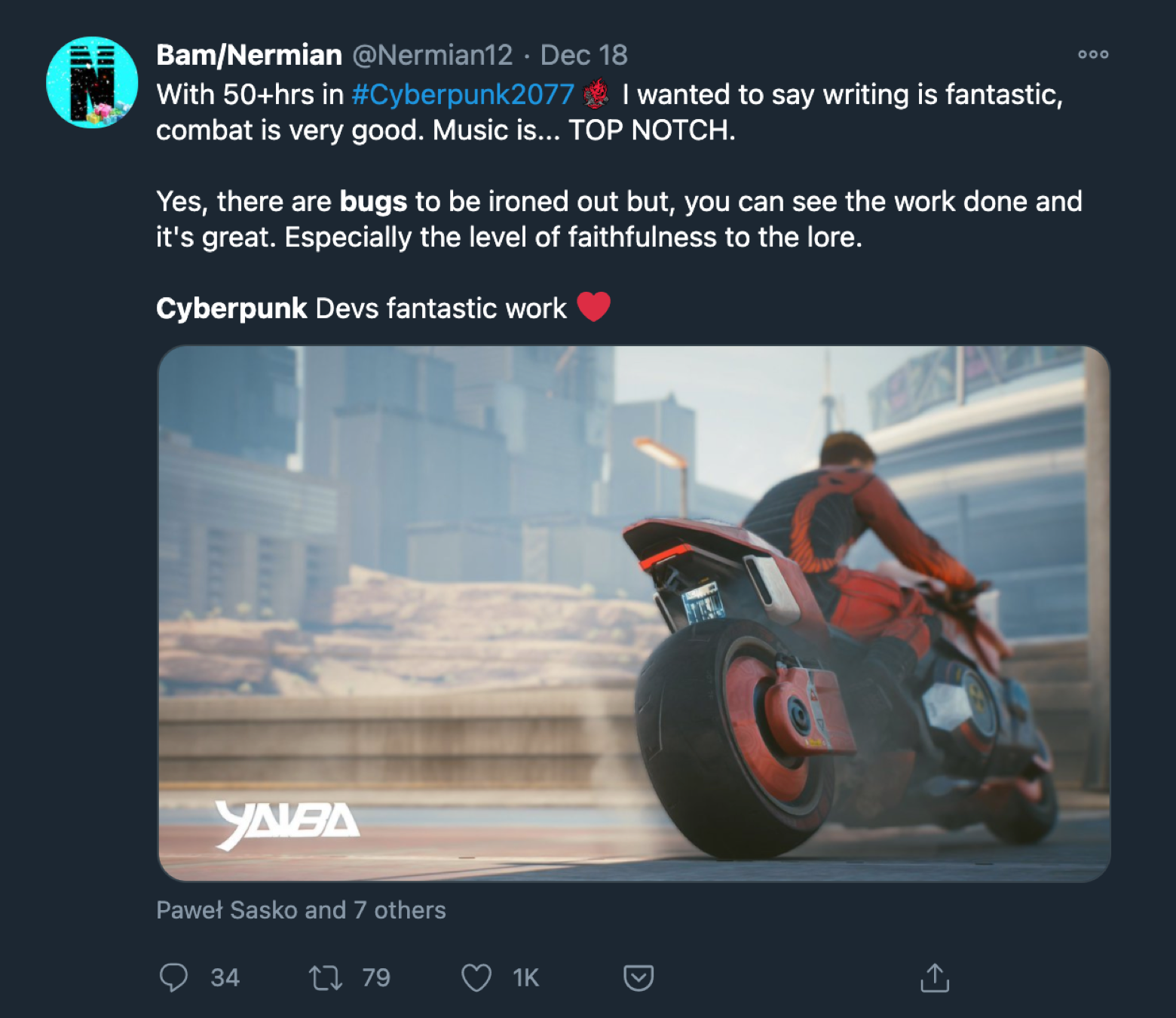 It’s fair to say, if you decide to support the devs and give Cyberpunk 2077 a try, you run no risks (unless you tend to be very annoyed with the glitches). Right now, you can purchase the game on the Microsoft Store for $59.99.

Honestly, there’s not much difference.  Most Cyberpunk 2077 PS4 problems are similar to the ones you’ll see on Xbox One. Due to the poor frame rate, the game freezes frequently. Plus, there are problems like signs with no graphics (or graphics loading too long). If you want to avoid the glitches, you should hold off buying the game for now. But if you’re ready to test drive it, you’ll get similar performance on PS4 and Xbox.

There is no macOS version of Cyberpunk 2077. Well, Mac is not your dream computer for gaming. But there are some workarounds. The obvious solution might be to install Windows on your Mac. You can either use Parallels or Boot Camp for the job. The latter is free but a bit more complicated because Boot Camp requires more of your disk resources. Whatever method you choose, make sure you run a thorough cleanup to prepare your Mac for Windows installation.

CleanMyMac X is the best tool you can use to free up storage and make the most out of your disk resources. It has a Smart Scan feature that helps detect and delete all kinds of redundant files, clutter, and even malware from your Mac. Seriously, you can make Cyberpunk 2077 work better on your computer if you keep it tidy with this app.

Connect PS4 or Xbox One controller to Mac

You’ll find detailed instructions on how to connect your controller to Mac here.

Improve gaming with this suite of apps

Both CleanMyMac X and Toothfairy are part of a productivity suite called Setapp. And not only that, Setapp gives you access to dozens of other premium apps like ClearVPN with its gaming optimization feature. ClearVPN is a perfect tool for online gaming fans — connecting you to the best gaming servers around the world so you can enjoy your experience without any glitches. You can try ClearVPN, CleanMyMac X, Toothfairy, and many other apps for 7 days free, then $9.99/month. 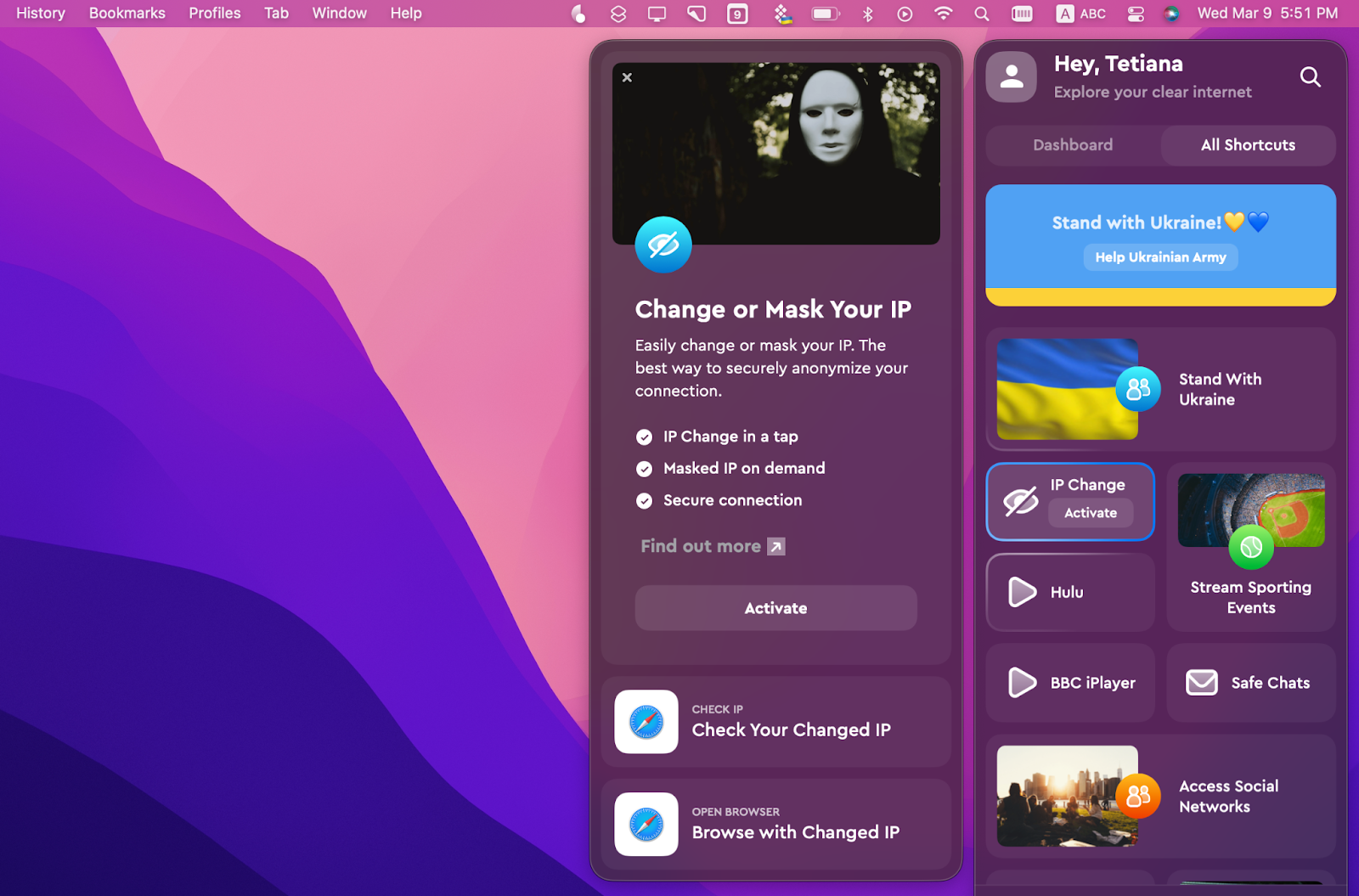 Cyberpunk 2077 might be poorly developed but it still boasts a fascinating storyline that takes the dystopian vibe of the original Cyberpunk 2020 and Cyberpunk Red to the new level. Let’s just hope the developer will remove the glitches soon so we can enjoy Cyberpunk in the proper quality. Because it’s clearly too early to say “game over” just yet.