What comes to your mind when you think of an integrated development environment (IDE) for Mac? We bet the first thing you thought of was Xcode, and we understand why. This IDE covers all development operations, including application testing, asset management, and uploading it to the App Store. On top of that, Xcode supports plenty of backend programming languages like Ruby, Objective-C, and C++ and contains a free GNU Compiler Collection.

If everything is so perfect with this IDE tool, why would we bother writing the article on Xcode alternatives and the tools you should pair with Xcode? In fact, Xcode disappoints developers with a lack of documentation and community support when it comes to solving issues, tedious application export to a device, and more. Let’s see how you can tackle these problems.

What is Xcode on Mac used for?

So essentially Xcode is a software package that has everything you need to build apps. And that’s the most accurate answer to the question “what is Xcode for Mac used for?” While it’s the only package officially approved for the development of macOS and iOS software by Apple, it’s clear why so many developers who work on a Mac use Xcode.

The logical question that follows is “does Xcode come with Mac?” No, it’s not pre-installed for obvious reason — because not every Mac user needs to do programming. So if you’re a beginner and wondering how to find Xcode on Mac, you should know that it can be easily downloaded from the the Apple Developer website or Mac App Store. 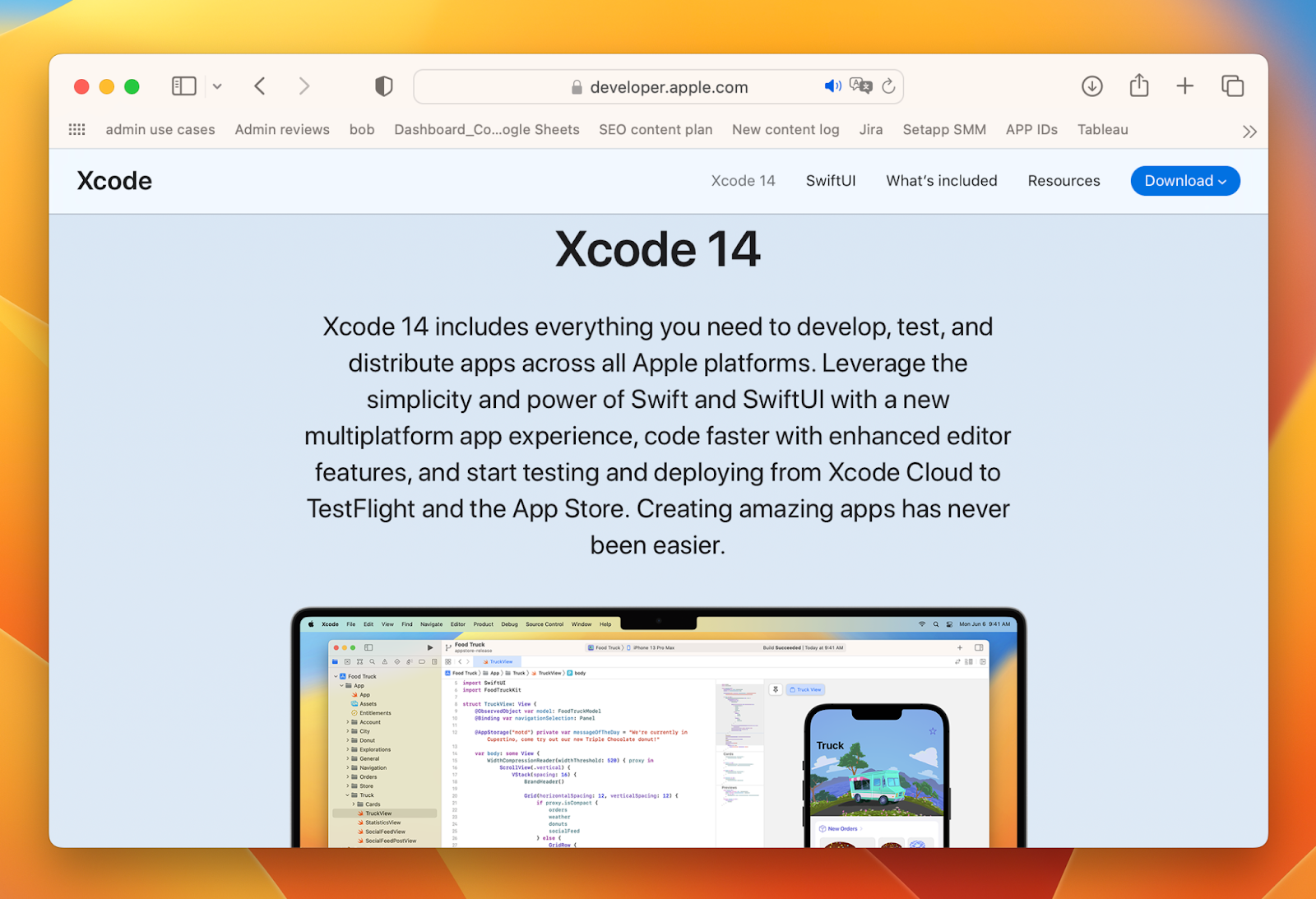 Is Xcode best for Mac?

Let’s talk pros and cons. Among the key upsides we can name great code completion, easy-to-use simulator for app testing, and the reputation of the most secure solution. But there are issues, of course: documentation could have been better, Objective C is a bit clunky, and Xcode itself is hard to maintain.

Speaking of maintenance, one of the core challenges for Xcode users is to clear the heaps of cache it generates. There’s a very effective solution we’d like to recommend — one-click cleanup with CleanMyMac X: 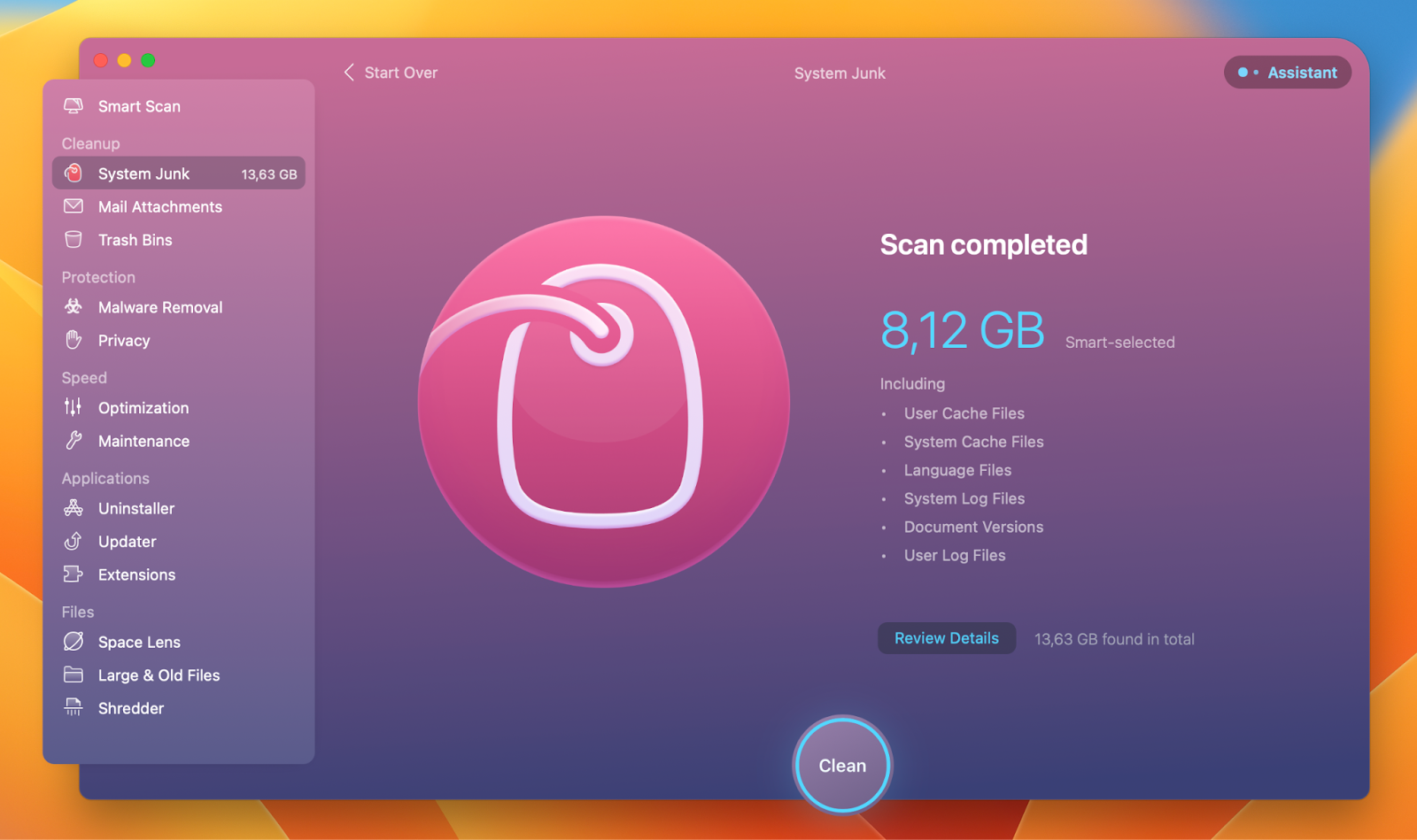 Although there are third-party alternatives to Xcode, this integrated development environment is considered the most secure and therefore widely used both by beginners and professionals. You don’t have to depend just on Xcode, though. There are awesome little helpers that can be paired with Xcode to improve your productivity.

The best Xcode alternatives for Mac

Let’s look at the apps we recommend you include in your development flow.

Note: not all the apps we mention below are alternatives to Xcode, meaning they can’t fully replace IDE, but they serve as effective enhancements and solutions to solving certain Xcode challenges.

Forget about the color export routine from Sketch to Xcode. Once you drag and drop a Sketch file to the application, you'll see a full list of colors available for export. This tool eases UI designers’ and developers’ lives since they don't need to worry about the accuracy of color export into Xcode. Developers like Sketch Export for Xcode for its simplicity of use, automatic generation of names for nameless hues, and export of colors for Dark Mode.

Besides, software developers don't need to have a licensed version of Sketch installed on their Macs to use this tool.

If you're getting lost in the sea of projects in tools like Xcode Projects and Swift Playgrounds, XCOrganizer will come in handy. This tool helps you find any project, workspace, or playground within seconds, thanks to metadata indexation. 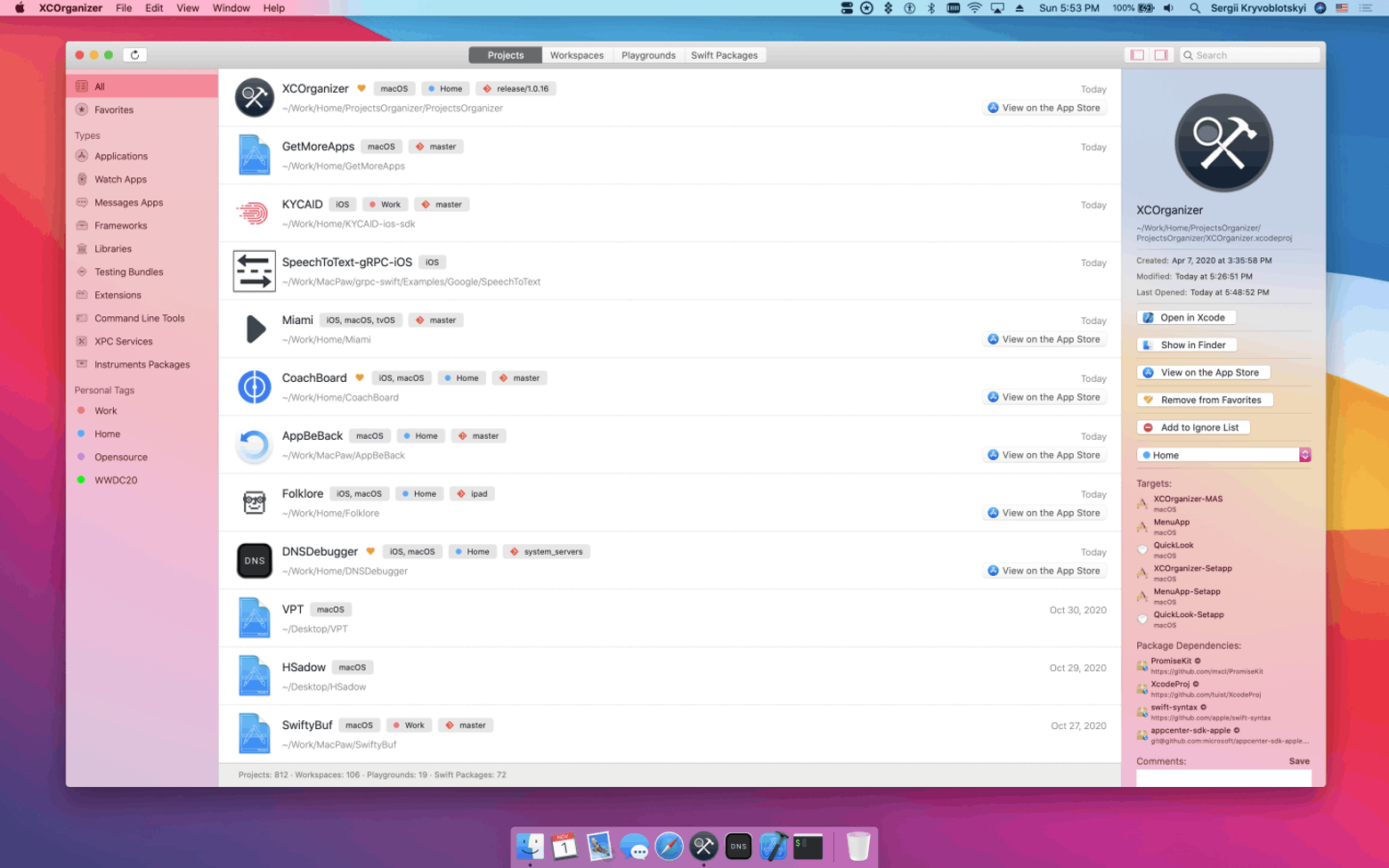 One of its most powerful features is search by project parameters like file extensions or technology stack. That means you don't even need to remember a project’s name since XCOrganizer will organize the projects by specific groups that'll help you browse through. If you'd like to distinguish some work projects from your pet projects, you can create a system of convenient tags.

While the two above tools weren't direct alternatives to Xcode, CodeRunner can change the game with a powerful code editor and IDE suite.

Out of the box, CodeRunner comes with: 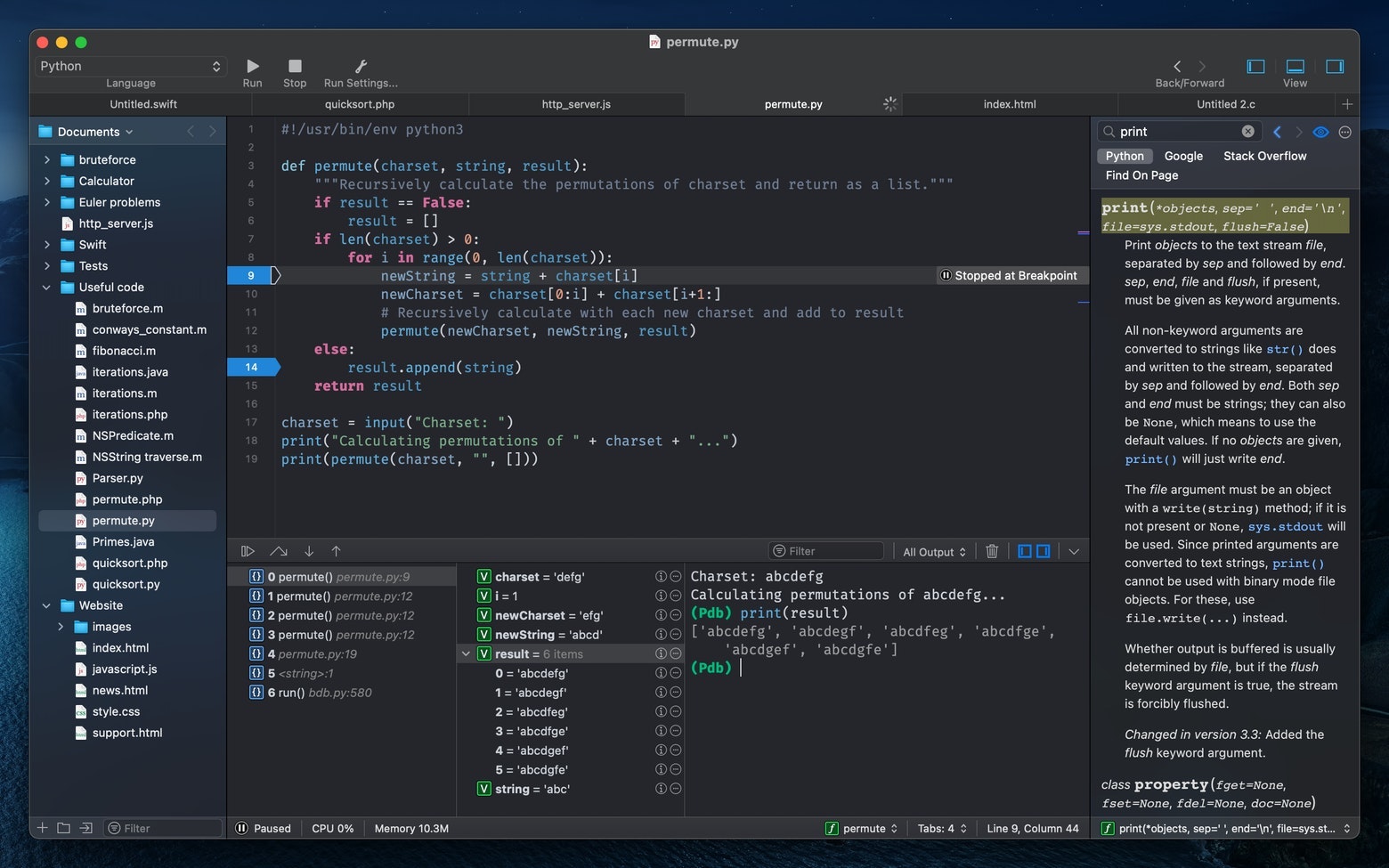 Consider Dash your ultimate cheat sheet library (more than 100 shortcuts to functions and commands) and documentation library for more than 200 APIs. You can also create your own documentation sets by simple integration with some of the package managers. 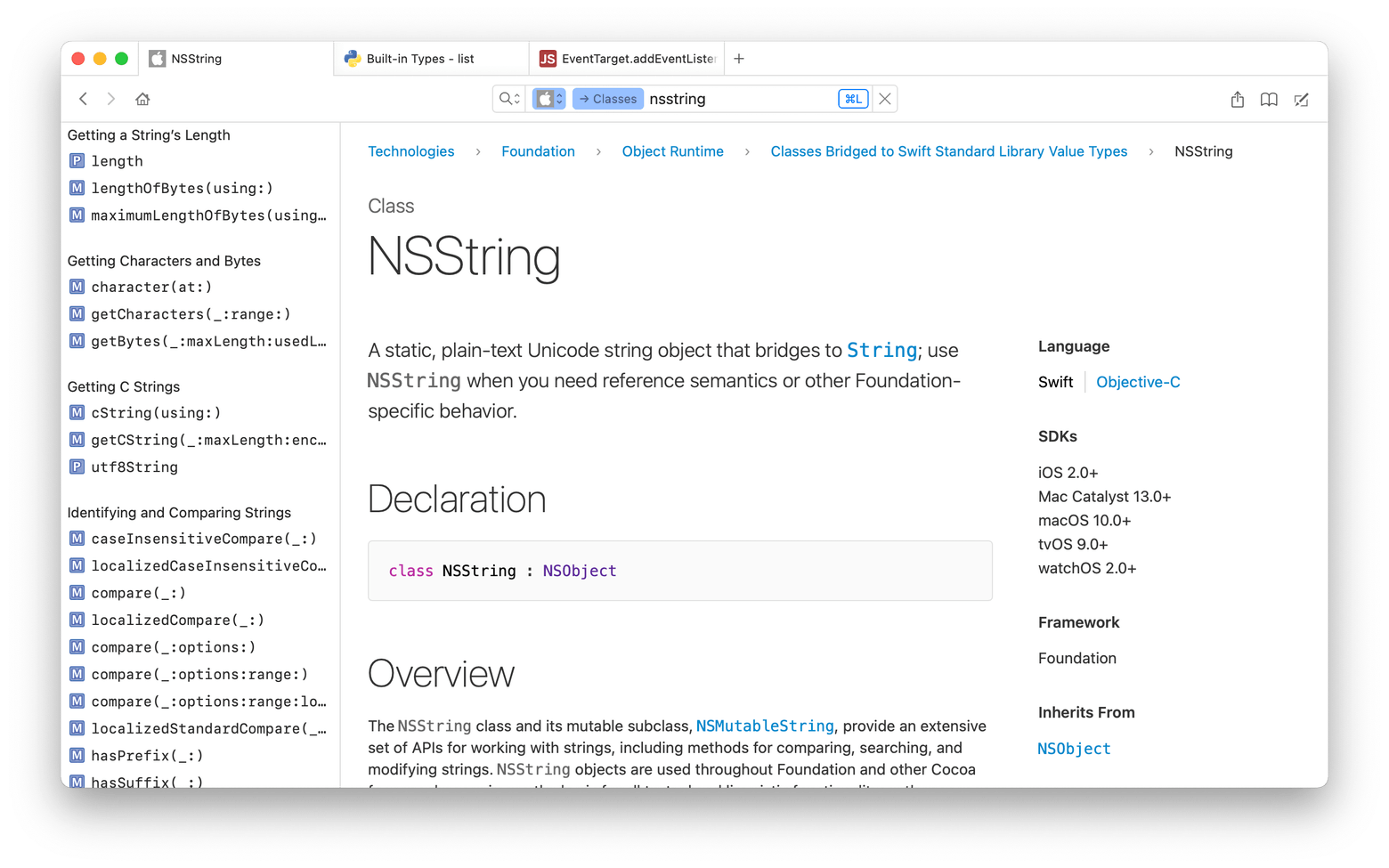 If you like everything neat and organized, Dash helps you arrange the documentation sets by keywords and specific parameters like technology stacks or platforms (web or mobile).

Grab little helpers and alternatives to Xcode on Setapp

Developing Mac and iOS applications, you're not limited to Xcode IDE. If you aren't satisfied with some Xcode features, you can test such alternatives to Xcode as:

These four apps are part of Setapp subscription, which makes them all free for 7 days. Apart from these useful dev tools, Setapp opens up access to great Mac, iPhone, and web apps such as CleanMyMac X, Craft, and Bartender — the apps you’ll benefit from no matter what your occupation or interests are.