Can’t play MKV on Mac? You’re not alone. Unlike Windows, macOS doesn’t play MKV videos natively, so you’ll need an MKV player. We’ll guide you through the top 7 MKV players that work excellent with MKV videos on Mac. Our list includes both paid and free MKV players with feature comparison, pros and cons, and pricing options. Let’s dive into it.

How to choose the best MKV player for Macs

It’s unfortunate that Macs to this day don’t have native support for MKV because this file format is the most robust of all. An MKV file can contain unlimited audio, picture, and subtitles, which makes it the best choice for high-definition video. But no worries, you can use it if you pick a good MKV video player Mac version. Here are 7 best MKV players for Macs:

Find the MKV player Mac version that matches your expectations, but also don’t forget to look at the bigger picture. What other formats does this Mac MKV player support? What’s with playback control? Any extra bells and whistles? It might surprise you that some Mac video players can even play online YouTube videos without ads! So make sure you know all the pros and cons.

Elmedia Player is our number one choice and a go-to player on Mac — not only because it can play MKV, but because it can play virtually anything, from FLV to MOV to FLAC to Blu-Ray. In fact, Elmedia makes you forget there’s file format compatibility to take care of, it just works.

Another perk is you can fully customize your viewing experience with Elmedia. It has superb playback control, audio equalizer, video-audio synchronization, video tuner, and more. For those who like watching videos while doing something else on Mac, there’s a picture-in-picture mode. And you can even grab a screenshot or a series of screenshots from the video. 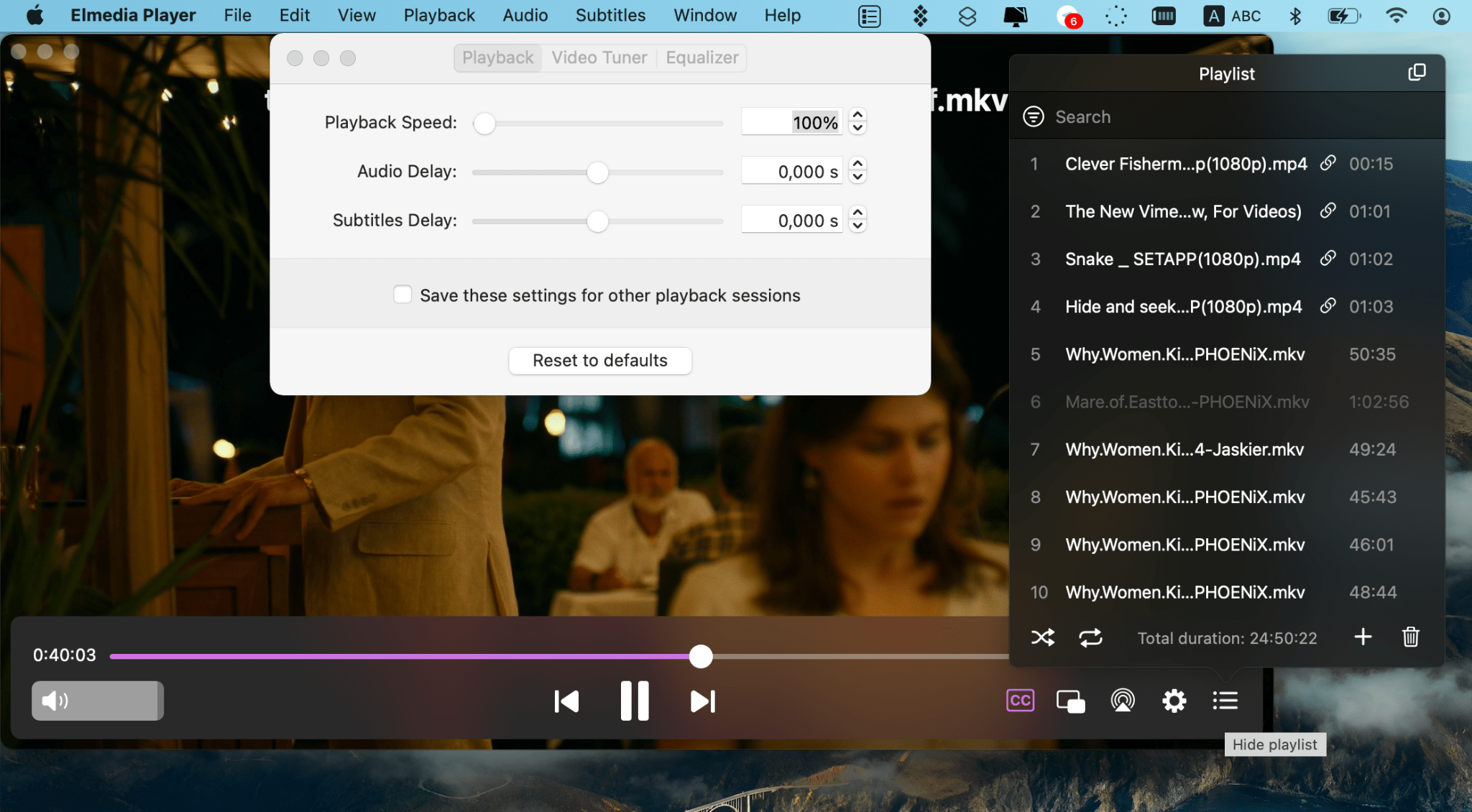 Finally, the most-loved feature is the ability to open a YouTube video in Elmedia and play it without ads. We all know how annoying those ads can be, so if you don’t have a Youtube Premium account with ad-free viewing, simply play all videos in Elmedia.

Movist Pro is another MKV player for Macs with impressive hardware-accelerated decoding and 4K support. While it can work with high-definition video, Movist Pro was designed to consume less CPU than similar players for Mac. This means it won’t affect your computer’s performance, which makes it your best bet when picking a good movie player.

Tip: For movies, we recommend combining Movist Pro with an app called Movie Explorer Pro. It can scan your Mac for MKV videos or any other videos in your preferred format and organize them into movie catalogs. A cool way to build your watchlist or a personal movie collection!

The best thing is you can adjust audio and picture as you watch. Movist Pro comes with lots of controls for resolution, screen size, volume, subtitles, play speed, and more. Want to jump to a specific second? It’s one click away. Add videos to your playlist? No need to stop your current video to do that. Fix brightness or contrast? Do it in real time, too! 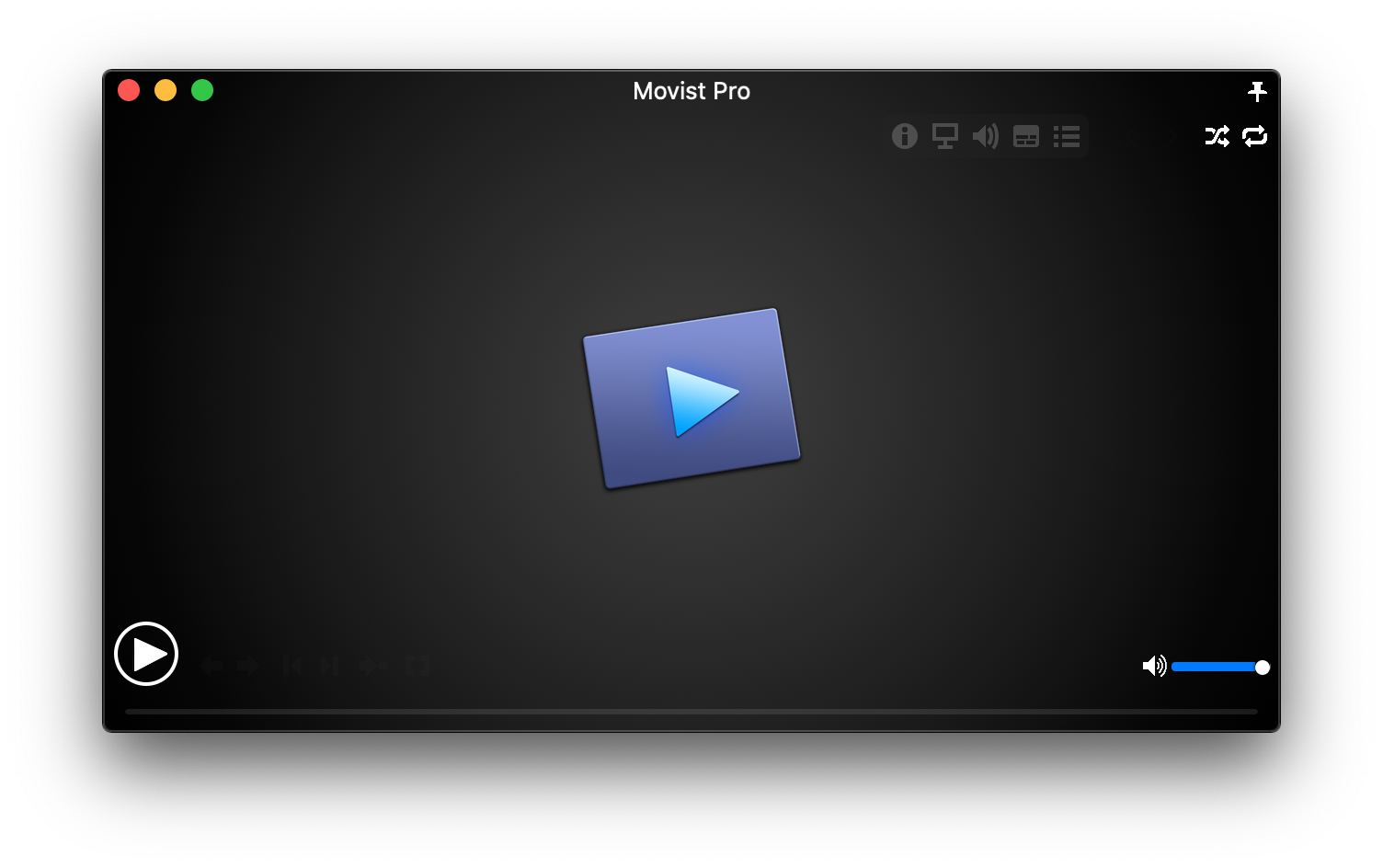 If you specifically need a tool that can edit MKV videos, check out VLC Player. It’s a free and open-source media player for Windows and macOS. Apart from MKV, VLC works with OGG, MP4, Blu-Ray, DVD, and other mainstream formats. People love it for editing features — you can trim your videos, use overlay, and apply water effects  — as well as the capability to open damaged or incomplete MKV videos.

If you’re looking for a default media player, VLC is not the best choice because it lacks playback control. What’s more, some users report there might be playback problems, specifically with MKV files. However, it makes sense to use VLC Player if you need to extract some information from a damaged file. 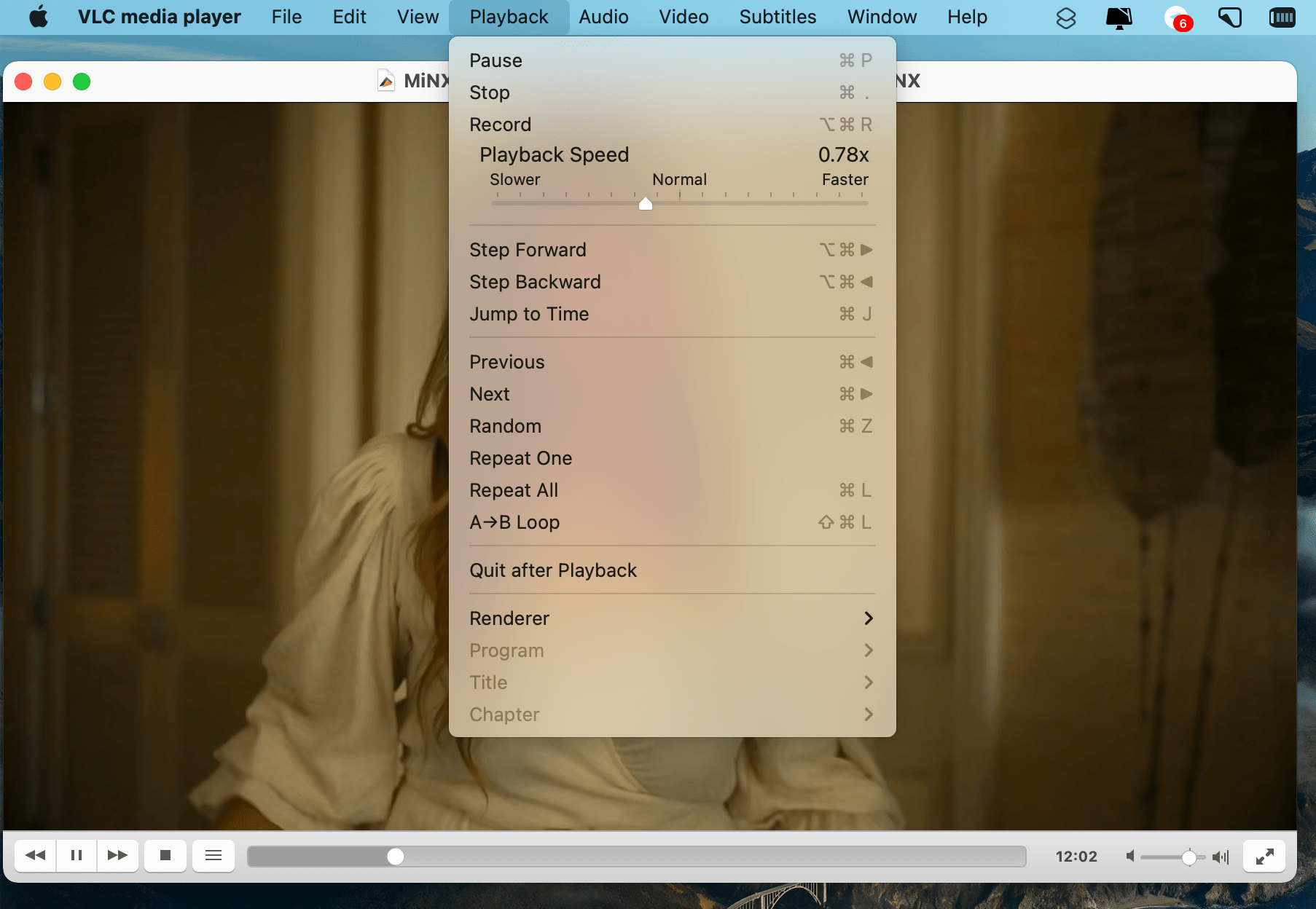 Compared to paid MKV players for Mac, VLC Player is also considered less safe. Because it’s open-source, malicious files might use the bugs in the program to get onto your computer, so it’s important to only download the app from the official website and regularly update it. 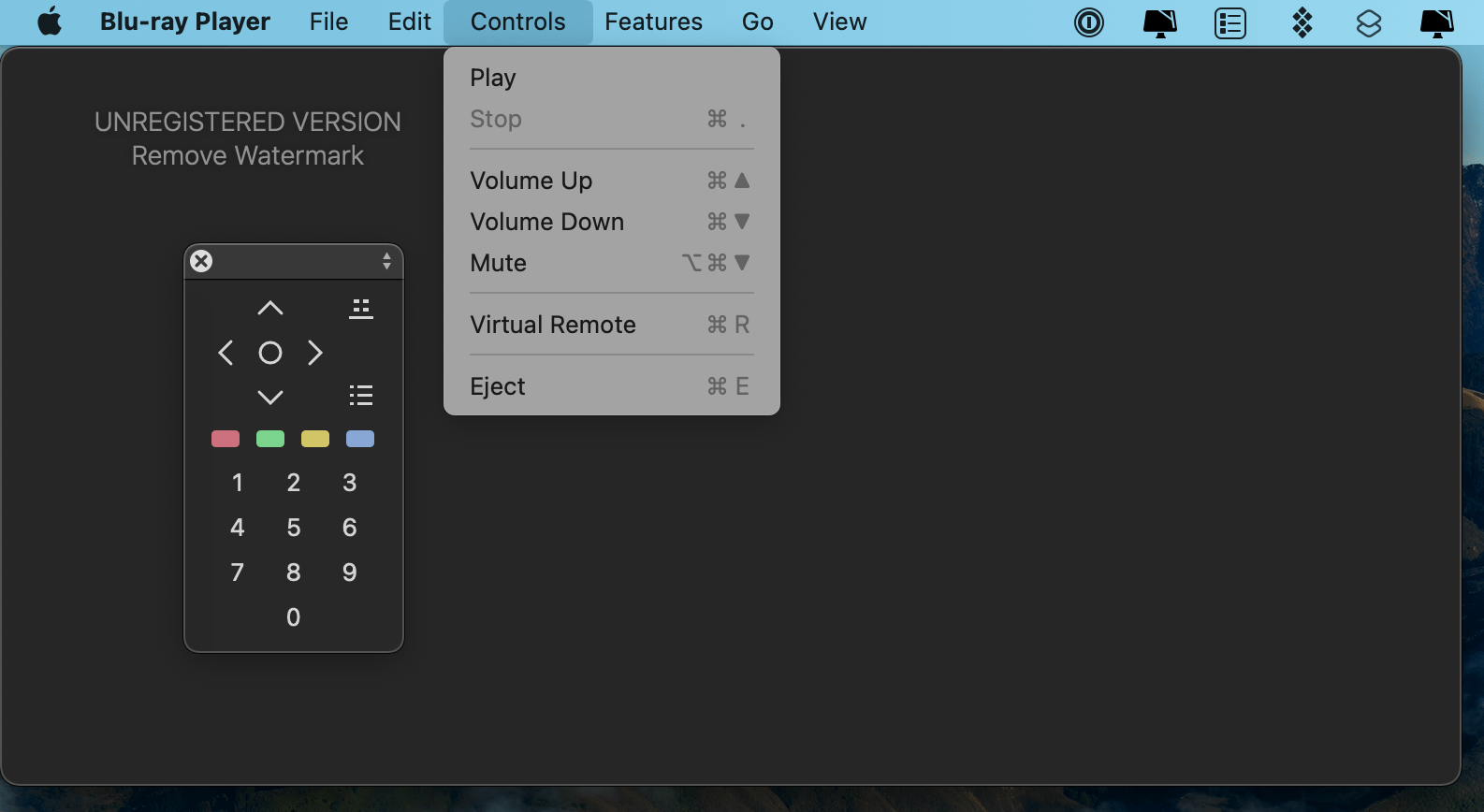 Price: around $70 (depends on store and location)

If you’ve tried to open MKV Mac video with Apple’s native QuickTime player, you know it doesn’t work. Well, this is the reason we write this article. But what if you love QuickTime and don’t want to replace it? There’s a free QuickTime component called Perian that can enable MKV support for the native player. Unfortunately, the Perian project was shut down a few years ago and hasn’t been updated since. You can only use it with old versions of macOS and QuickTime.

Another way to watch MKV on Mac is to install Plex Media Server. Plex is a client-server media player that allows you to access and manage extensive video collections on any device. Basically, it’s like a streaming service, except you provide your own video content instead of taking it from a big platform like Netflix. Plex supports MKV so if you think about putting together an own video collection with MKV files in it — consider getting a Plex Pass.

Are you a Touchpad fan? Then you should give MPlayer X a chance. This media player has playback controls that are totally based on Trackpad gestures. Tap, pinch, and swipe to change the volume or screen size — MPlayer X can help you build a productive and fun flow. And of course, MPlayer X supports MKV, along with some other not-so-popular file formats such as WebM and ASF.

Tip: If you like customizing your Touchpad, Touch Bar, or any other input device for more productivity, we hope you have BetterTouchTool on your Mac. It’s the best tool for power users.

How to open MKV file on Mac

There are two ways. One is to open a Mac MKV player, then drag and drop your video onto the app window or go to the main menu > Open > File. The other option is to right-click your MKV video > Open with, then choose the player. There are exceptions, of course. For example, a tool like Plex requires a media server setup, which is a complicated process and you should check their website for instructions. Once you’ve found your perfect media player, make it a default so it automatically plays all your videos on Mac. This will save you some clicking. 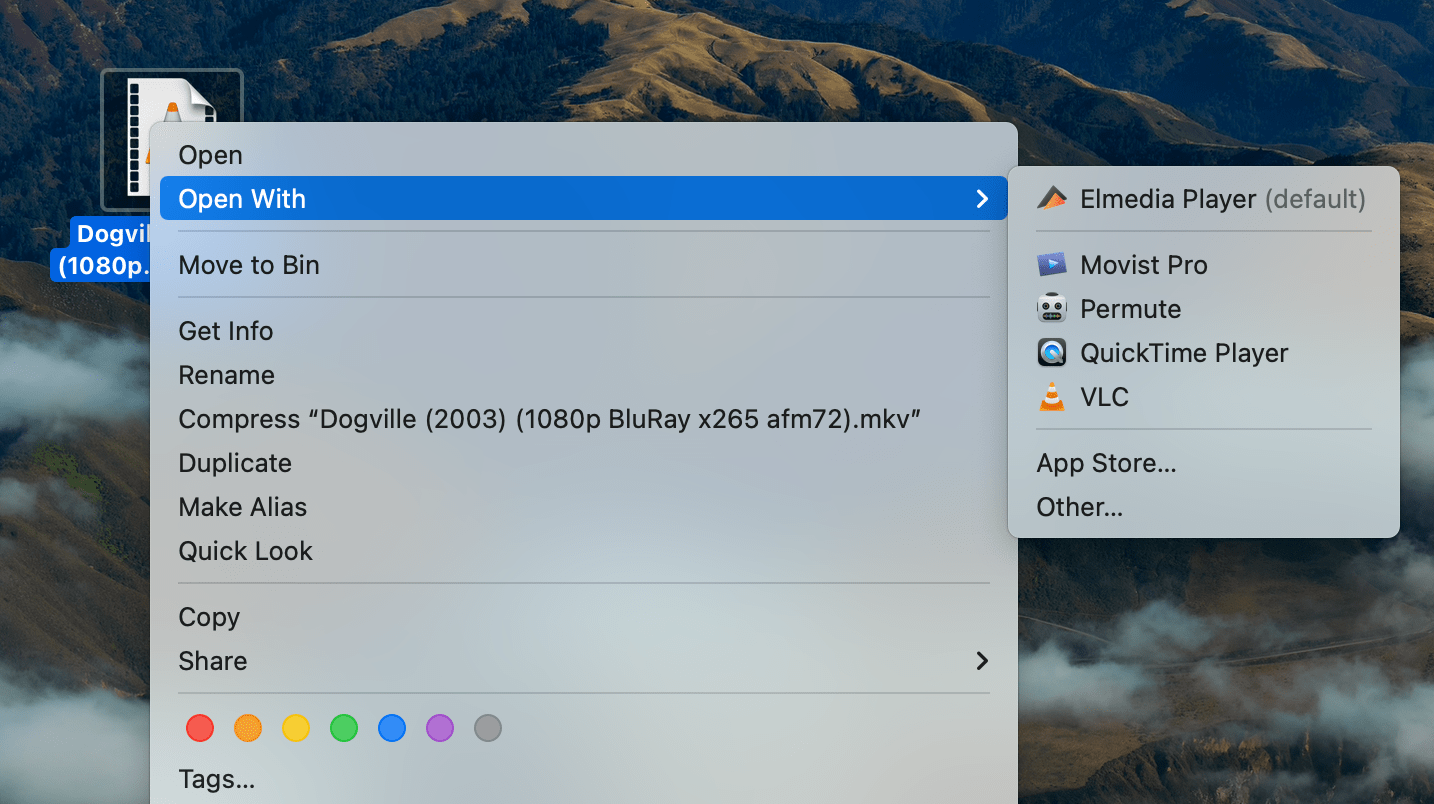 We know what you’re thinking. Which one of these 7 MKV player Mac tools should I get? All the options reviewed in this guide are pretty good, but everyone’s flow is different — so some will be better than the others for you. Elmedia Player and Movist Pro are the most robust and safest media players you can install on Mac. What’s more, both are part of Setapp, a productivity suite for Mac and iPhone users, which has all the apps you’ll ever need.

If you have a specific need — for example you want you player to work with Blu-Rays — then you should look into Mac Blu Ray Player. And if you want a streaming service plus a media player, check out Plex.

Finally, if you don’t want to install a new MKV player for Macs, you have another option — converting MKV videos to MP4 and playing them with QuickTime. Read the detailed guide here.