When someone says video, you probably think of MP4. The reality is, there are many video file formats better than MP4. MKV is a great example.

MKV is a video container that is capable of storing multiple video, audio, and subtitle tracks within a single file. Initially released in 2002, the format is still very popular. One of its downsides is that it tends to have larger file sizes compared to a similar AVI. MKV may also not work in some video players, and you can’t upload your video saved in MKV format to, for example, YouTube.

To play MKV on Mac, you’ll need to use third-party media players — more advanced than QuickTime. Another option is to learn how to convert MKV to MP4. We’ll walk you through both.

Most media players for Mac have limited file format support. With Permute, you can convert any rare format to MP4.

This ability to wrap all types of media into one file type is what makes MKV so popular. But it’s only available to a limited number of devices, and most often used as a video file-type rather than for true multimedia files. Because it’s open-standard, there’s no advantage for large tech firms like Apple to support MKV, or adopt it onto their platforms.

In fact, there’s no native support for MKV within macOS. If you were sent an MKV file, you would quickly have to convert the MKV to MP4. In this article, we’ll talk you through how the conversion works using several different MKV to MP4 converter apps.

MKV to MP4 without losing quality

Remember when we said MKV files were still not terribly popular? Don’t worry, we haven’t forgotten about that. There will still be plenty of times you’ll need an MKV converter for your Mac, especially if you’re going to share your files with anyone. Chances are they will find the MP4 format much easier.

For this use-case, we recommend Permute converter. It’s an app focused on converting just about any and all file types to – well, just about anything! It’s really simple to use, too. Here’s how to convert MKV to MP4 using Permute: 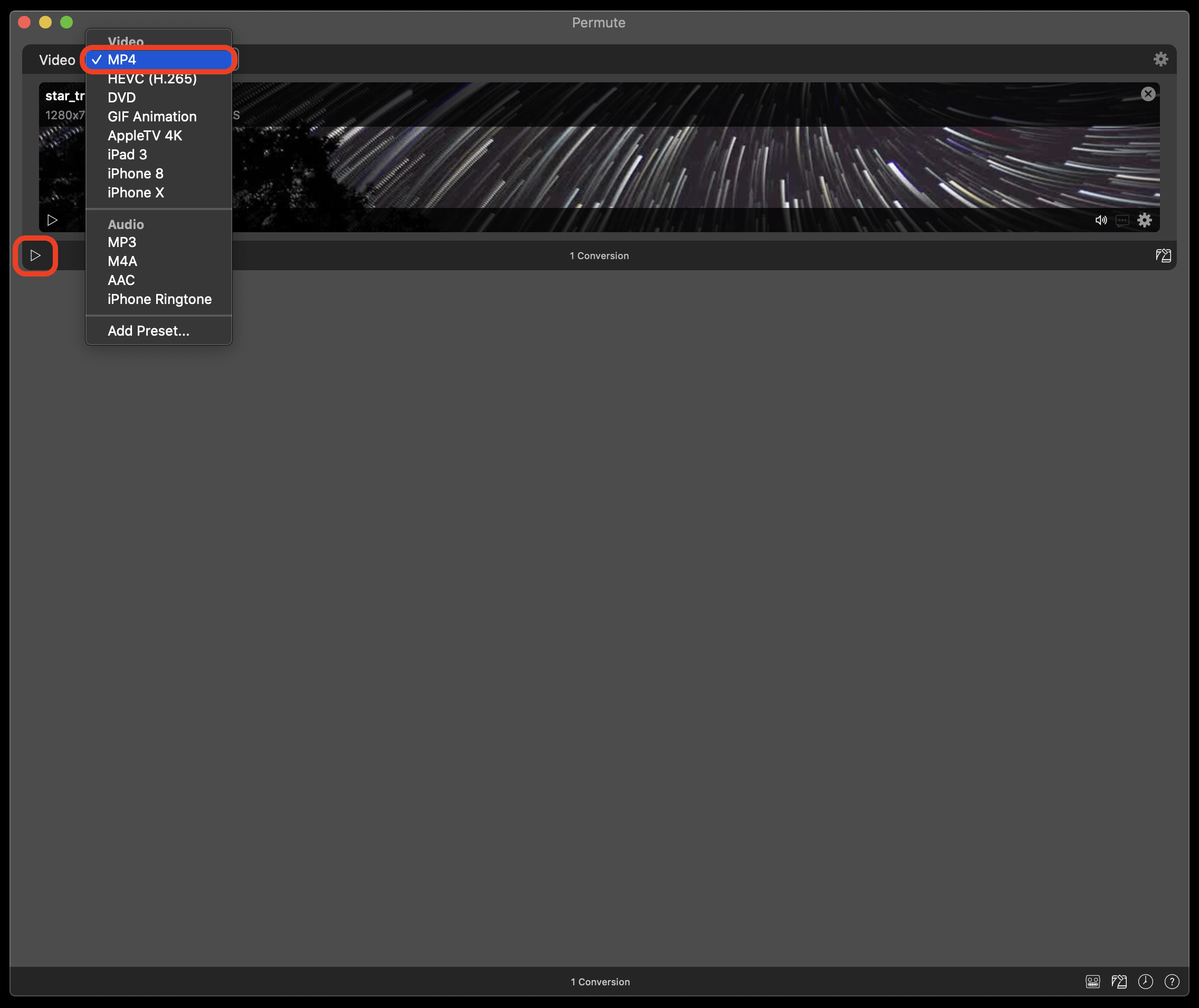 That's it! Your MKV file will convert to the MP4 format. Keep a few things in mind before you start a transfer, though. In the upper-right corner of the sub-window, you’ll see a gear icon. This is where you can control where your converted file is placed. You can also make other changes like rotating the video, should you need that functionality.

Permute is also adept at batch conversion of files. If you had a few MKV videos you wanted to convert to the MP4 format, you don’t need to go one-by-one. You could choose multiple videos to convert in step three above, if they were all in the same location on your Mac. If the videos were in different places (one may be in downloads, the other in ‘documents,’ another in a folder – you get it) you could simply repeat steps two, three, and four until all your videos were added.

The ‘sub-window’ in Permute holds files to be converted, so adding multiple videos will convert them all the same way. Keep that in mind before you start; if you didn’t want all your videos to be MP4s, you’d have to create new groups.

That’s pretty simple, though. On the bottom left of the video is a gear icon, where you’ll see an option to ‘create new group.’ Simply do that and you’ll find the video in its own sub-window, ready for conversion to a different format.

Got a file you can't convert? Here's how to change video formats flexibly.

How to play MKV on Mac

Because MKV isn’t natively supported, you shouldn’t expect your Mac to spin up QuickTime to play downloaded files as it does with so many other media file types. Instead, we have two great options for MKV playback: Elmedia Player, and Movist Pro.

Elmedia Player is exceptionally strong at playing just about any file type you can throw at it. The app uses hardware accelerated decoding to play files, which ensures your MKV playback will be strong. Elmedia player also supports MP3, MP4, SWF, FLV, AVI, MOV, and DAT file types.

Play any video on Mac

Download videos from the internet with Folx, then play them with Elmedia Player. Every file format works.

Here’s how you can play any MKV file using Elmedia Player: 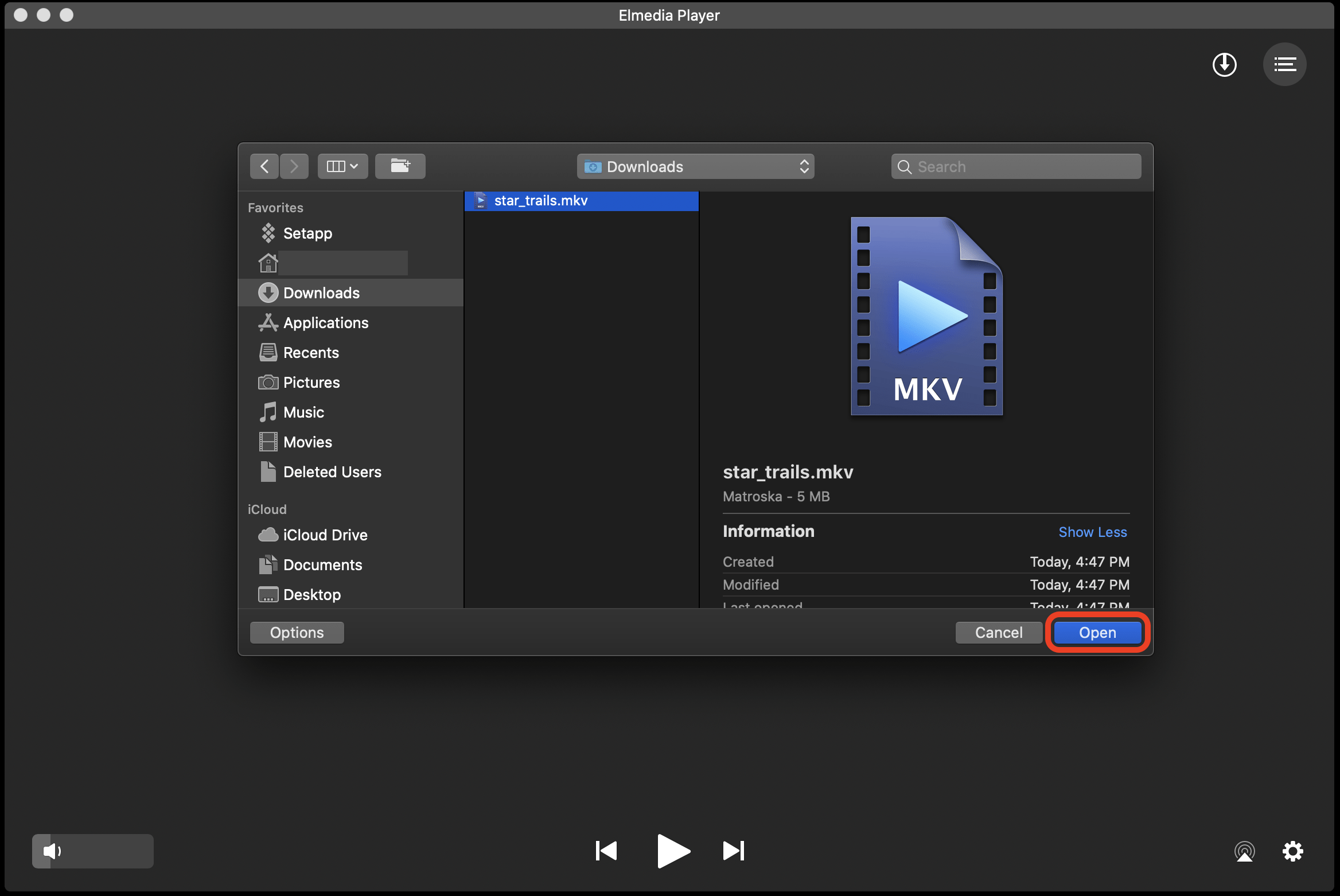 And that’s it! Your MKV file will automatically play in Elmedia Player. In the Elmedia Player window, you’ll be able to pause and play your file, fast forward or rewind, and choose the volume level. On the bottom right of the screen you’ll see a gear icon, where you’re able to finesse the playback speed, manage audio and subtitle delays, control the brightness, saturation, contrast, gamma, and hue of your video, and enjoy a full equalizer for your MKV video files.

Movist Pro is just as impressive when it comes to video playback. Here’s how to play an MKV video on Movist Pro:

Deja vu, eh?! It’s the same process as Elmedia Player, which is great. Movist Pro has a lot of really great things going for it, too.

It has a really minimalist interface, with controls that quickly dive out of the way when a video is being played. The scroll-bar is as far to the bottom as possible, and the ‘play’ button is all the way on the bottom left. Even with controls on-screen, you end up seeing more of the video than with most other players.

Movist Pro also supports Mac’s native picture-in-picture mode, which pins a video to the bottom-right side of your screen. It’s a great way to keep track of videos while doing other things.

If you’re just looking to play a particular section of a file, Movist Pro has a really neat feature that lets you choose a range within a file, and loop the playback for that range. You can also add bookmarks to any video; an excellent option if you want to keep tabs on a video lecture, or mark favorite parts of a movie.

When you need to convert MKV to MP4, there’s nothing better than a simple, effective converter. For our liking, Permute is the way to go. It’s simple, effective, and doesn’t create any issues with the converted files. Too often we’ve seen converters that degrade the quality of a video.

Playback is also a critical component. While Permute can convert with ease, you may not always need that feature. Besides, you’ll want to watch your converted video files, too!

And all three – Elmedia Player, Movist Pro, and Permute – are available for free as part of a 7-day trial of Setapp, the world’s best suite of productivity apps for your Mac. Setapp also affords you free access to dozens more of the best Mac apps, which span all kinds of use-cases.

Convert MKV to MP4 or get a media player with native support for MKV. Setapp is a one-stop toolkit that solves any problem.

When your free trial period is over, Setapp is only $9.99 per month. If you pay for a full year in advance, it brings the total down to $8.99 per month, a 10 percent discount! Families will enjoy Setapp’s $19.99 per month plan, which provides unlimited access to the full setapp catalog on up to four different Macs.

It’s an incredible deal. Give Setapp a try today!

What is the best and fastest way to convert MKV format file to MP4 format?

One of the best and fastest ways to convert an MKV file to MP4, in our experience, is with the help of the Permute app. All you have to do is open the app and drag and drop your MKV. Next, at the top left of your app window check that the conversion format is set to MP4 (it’s likely going to be a default) and hit the little play icon at the bottom to start the conversion.

Your converted MP4 will be saved to the same location that your original file was dragged and dropped from. You can change this in the app’s settings to ‘always ask’ or select a new default folder.

How to convert MKV to MP4 without VLC?

If you don’t have a VLC player to play back your MKV, you can easily convert your media file with the help of Permute app as described above. You can also do so through online converters.

How to convert MKV to MP4 free?

Converting an MKV file to MP4 takes very little time with tools like Permute. You do need to pay for the app either as a standalone tool or you can get it as part of your Setapp subscription. So if you are already subscribed to Setapp and using other tools there, you can get Permute there.

To convert MKV to MP4 for free, you can try an online converter. We’ve been able to convert our small MKV screen recording into MP4 with the help of online tools both on convertio.co and online-convert.com.