There are three things we know about MacBooks for sure — Apple builds its laptops well, they are pricey, and we tend to create emotional bonds with them. This means that when we invest in a new Mac, we expect it to become a companion to our lives for years.

But just how long do MacBooks usually last?

While Apple’s hardware is indeed built to live through a lot, especially when well cared for, there are other key factors that determine MacBook longevity. How often do you use your Mac? What types of tasks do you perform regularly? For how long can you count on Apple system updates and compatibility with third-party apps? These are the questions that together make up a reasonable answer to how long your Mac could last before you’ll need to replace it.

Let’s look at each of them in more detail.

How long do Macs last?

It’s important to understand that the two key aspects that are going to define an average lifespan of a MacBook Pro are its durability and compatibility.

First, let’s look at durability. How long do Apple computers last depends on how they are being used — the harder you work your Mac, the sooner it’s likely to start wearing out. Professional video editing is definitely going to be harder on your Mac than, say, casual web browsing.

On the other hand, even if your Mac could last for a long time, at some point it won’t be able to update to the latest software. The math here is simple — you can expect around seven years of access to the newest macOS releases. After that, while your MacBook might still function, it will gradually become incompatible with certain apps and lose access to full security protection from Apple.

Therefore, it will be a combination of your working patterns, mechanical accidents, Apple security updates policy, and third-party apps compatibility that will determine how long do Mac Books last exactly in your case.

Things to try before switching Macs

If your Mac is covered by the latest macOS update, but you feel it’s starting to get noticeably slower, don’t think your only alternative is buying a new one. There’s a great way to take good care of it and bring it up to speed with CleanMyMac X.

CleanMyMac X is a powerful app to declutter, protect against malware, and speed up general performance for years of MacBook longevity. Its optimization and maintenance tools are super easy to use with a single click on Run: 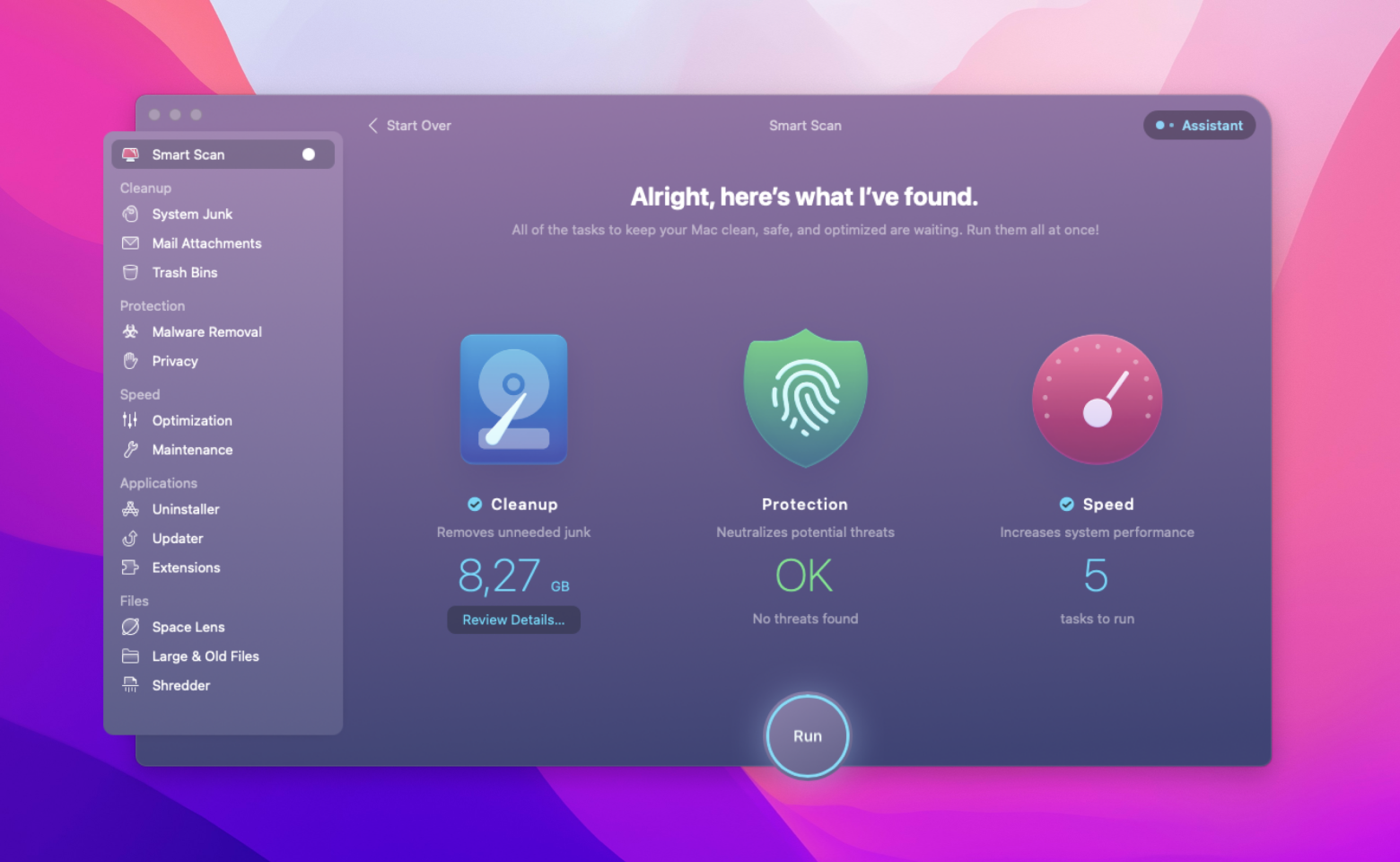 How to keep your MacBook running for longer

Find out how to take care of MacBook longevity, learn when it’s time for a new Mac, and look for ways to boost productivity with the help of 240+ apps on Setapp.

Clear signs it’s time to get a new Mac

As mentioned before, Macs are built to last — an average lifespan of a MacBook Pro, some experts say, might exceed a decade. So, there’s definitely no need to think about buying a new one every couple of years.

At the same time, you’d still want to watch out for signals that it’s time to think about a newer model. Here are the most crucial ones.

Your Mac can’t run the latest version of macOS

Every time Apple releases a new version of macOS, it cuts off some older MacBook models from updating. And although you don't need the latest version of macOS to use your Mac, Apple now warns that only devices running the most recent major operating system versions should expect to be fully protected.

Check where your MacBook falls on the scale of latest macOS compatibility.

The issue with third-party apps is that technically nothing stops their developers from making apps for older Macs — after all, it’s in their interests to serve a wider audience. But most of the time there’s still a cut-off point, after which certain macOS versions aren’t supported.

A good illustration for this is Apple’s move to M1 processors. New M1 Macs can run code designed for Intel Macs and are, therefore, fully compatible with current versions of third-party apps. But should developers decide at some point to design new versions of their apps for M1 only, older Macs will be left out.

Generally, though, current cut-off points of the biggest third-party apps are quite forgiving: Google Chrome’s cut-off point is macOS released in 2015, Acrobat Reader calls for 2017 version of macOS, while Dropbox runs starting with 2014 OS X 10.10 Yosemite, to name a few.

With each new version, your Mac’s operating system will generally require more processing power and storage. Besides, we constantly accumulate data and apps that take up space. So when struggling for free space on your Mac becomes a routine, and no amount of cloud storage helps, you’ll know it’s time for a new Mac in your life.

Your Mac’s hardware is too weak

Although MacBooks are generally very reliable, like any other piece of hardware, they will eventually start to show signs of aging.

You’ll definitely notice the two most crucial components that wear out with years of service: storage disk and battery. A lack of sufficient RAM will severely limit your multitasking, an old CPU will make high-intensity tasks like video editing extremely slow. Overall, you’ll start noticing frequent system freezes and a decline in performance.

A worn-out battery is, of course, much easier to get around, because you can always continue using your MacBook with the charger. But that surely defeats the very idea of portability, affecting your general performance and experience.

How to keep your MacBook healthy

Luckily, there are steps you can take to help extend your MacBook longevity.

To always be in control and understand what’s going on with your Mac’s system at any given minute, try iStat Menus.

iStat Menus is a comprehensive system data collector that provides you with real-time vital info about the key indicators of your Mac performance and well-being. You choose which stats are of interest to you, and the app menu bar icon will show all the info without you ever needing to even open the app: 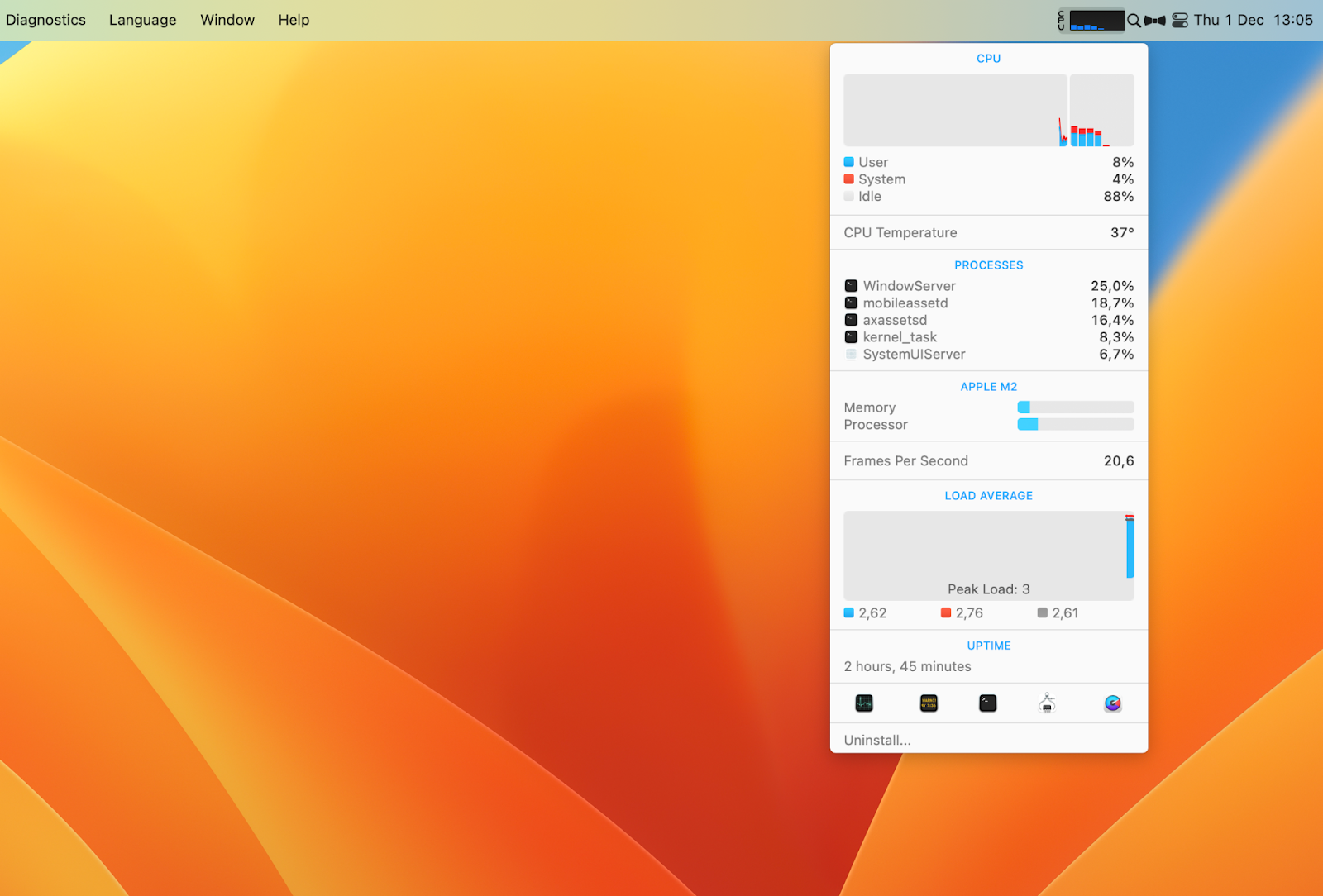 Did you know that apps running in the background still consume lots of CPU? This leads to slower overall performance, shorter battery life, overheating, and Mac fans’ overload. A great tool to help you reduce CPU usage and have a positive impact on how long should a MacBook Pro last is App Tamer.

App Tamer spots idle apps that hog CPU and allows you to slow them down, stop, or configure which ones you want to control and how much CPU they can use when idle. What’s great is that you don’t have to commit to slowing down or stopping your background apps continuously — App Tamer allows you to: 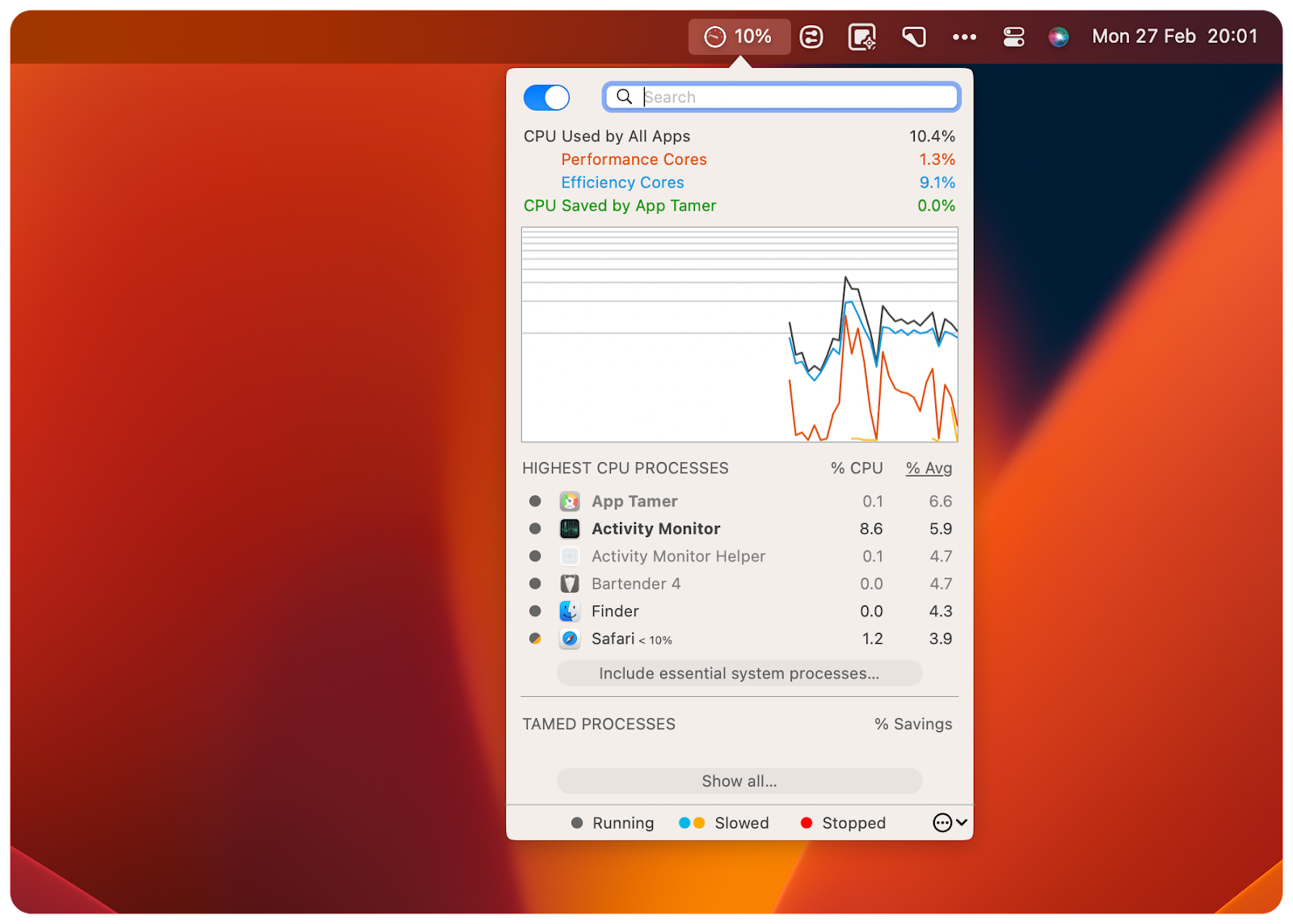 If you want to beat an average lifespan of a MacBook Pro battery and help yours last longer while improving its overall battery health, be sure to try Endurance. 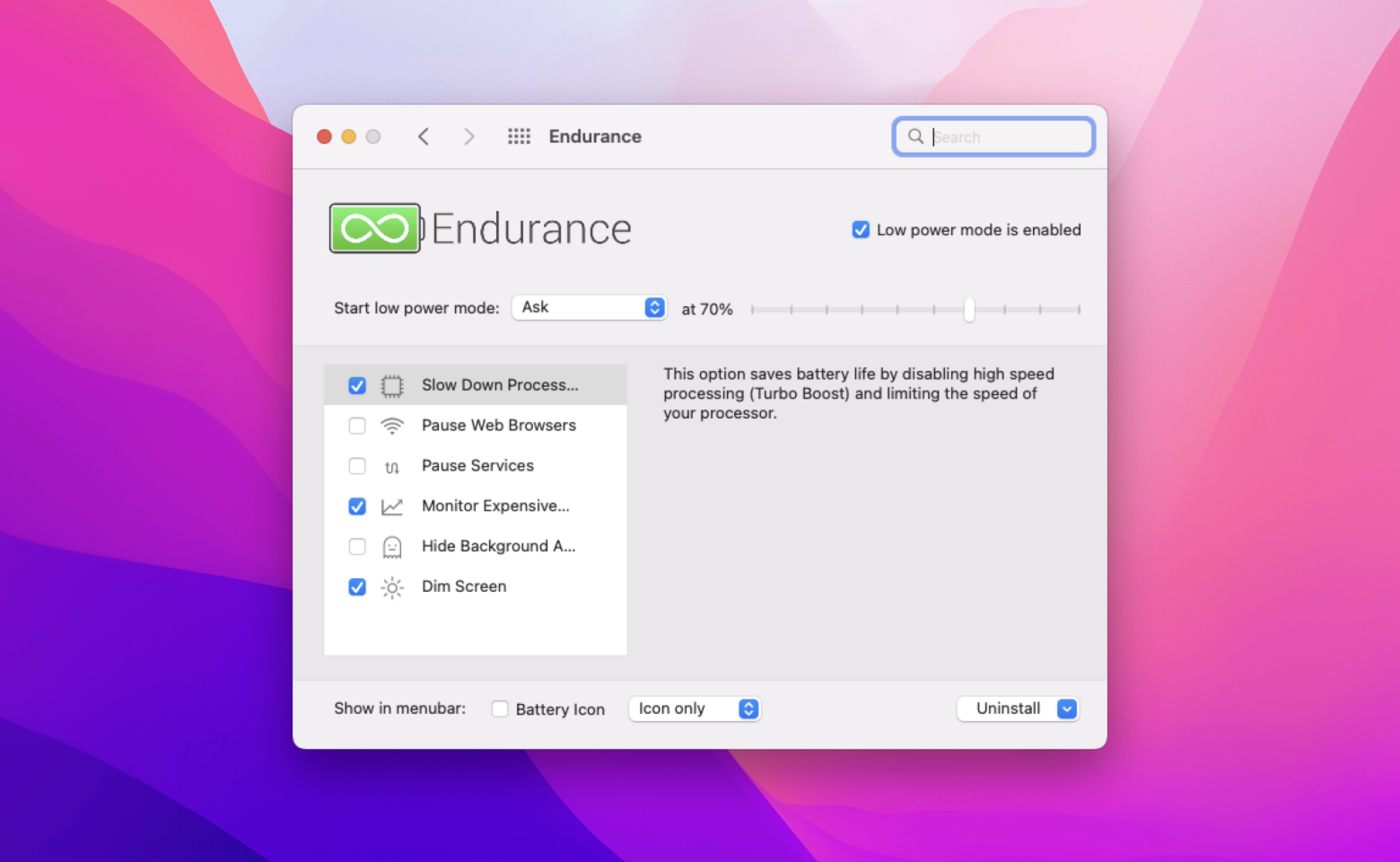 Although there’s a good logic behind calculations of how long do MacBooks usually last, the actual number of solid productive years for your Mac depends on the intensity of your working style and efforts you’re willing to put in to keep your MacBook healthy for longer.

To do that choose CleanMyMac X to easily declutter, optimize performance, protect, and revive your Mac’s speed. Keep in touch with real-time vital system indicators of your Mac with the help of iStat Menus, and avoid unnecessary CPU wear-out with App Tamer.

Be sure to try all four — CleanMyMac X, iStat Menus, App Tamer, and Endurance — for free with the seven-day trial of Setapp, a platform of high-performance, best-in-class iOS and macOS apps. Invest in your Mac’s well-being and check out more than 240 other options to boost your productivity.