These days more and more would-be entrepreneurs are taking the plunge by building their own apps, so it’s no shock that we’ve seen a ton of growth in two key areas:

It’s unlikely that you’d wind up on an article about how to create an app without some technical expertise, so let’s focus on the second area in this post, highlighting how some of these pieces of software can help you to design an app using tried and tested frameworks.

In these cases, it isn’t the technical side of things (such as having a bit of coding knowledge) that’s the most significant barrier to creating an app, but the prohibitive cost and time commitments. Here’s a list of apps that address these issues.

Get a huge set of top design tools for modern app developers. Best utilities in one pack, give it a go!

Before you create a mobile app…

For all of you out there champing at the bit to build your brand new mobile app, the first piece of advice is this: slow down. It’s very likely that you’ve already asked yourself the following questions:

If not, ask them. And make sure you’re answering them honestly.

Originality isn’t necessarily the be-all and end-all of a great app, as long as you’re putting your own unique spin on something rather than cloning it outright, but knowing how to make an app is never going to be a useful skill for you if you proceed with an app that you can’t imagine anyone else using.

Maybe you’re the type of person who can organize all of their thoughts in a sterile Word document or Excel spreadsheet. Or maybe you rather associate creativity and innovation with the visual medium.

Using an app like iThoughtsX  to generate mind maps can be a great way to get your thoughts down on paper and allow you to hop between threads without having to entirely abandon what you were working on previously.

iThoughtsX is the best for brainstorming projects because it’s so colorful and places more emphasis on planning and goal-setting. If you really want to use it for assigning tasks, it does offer a task management format that’s a little more straightlaced too. 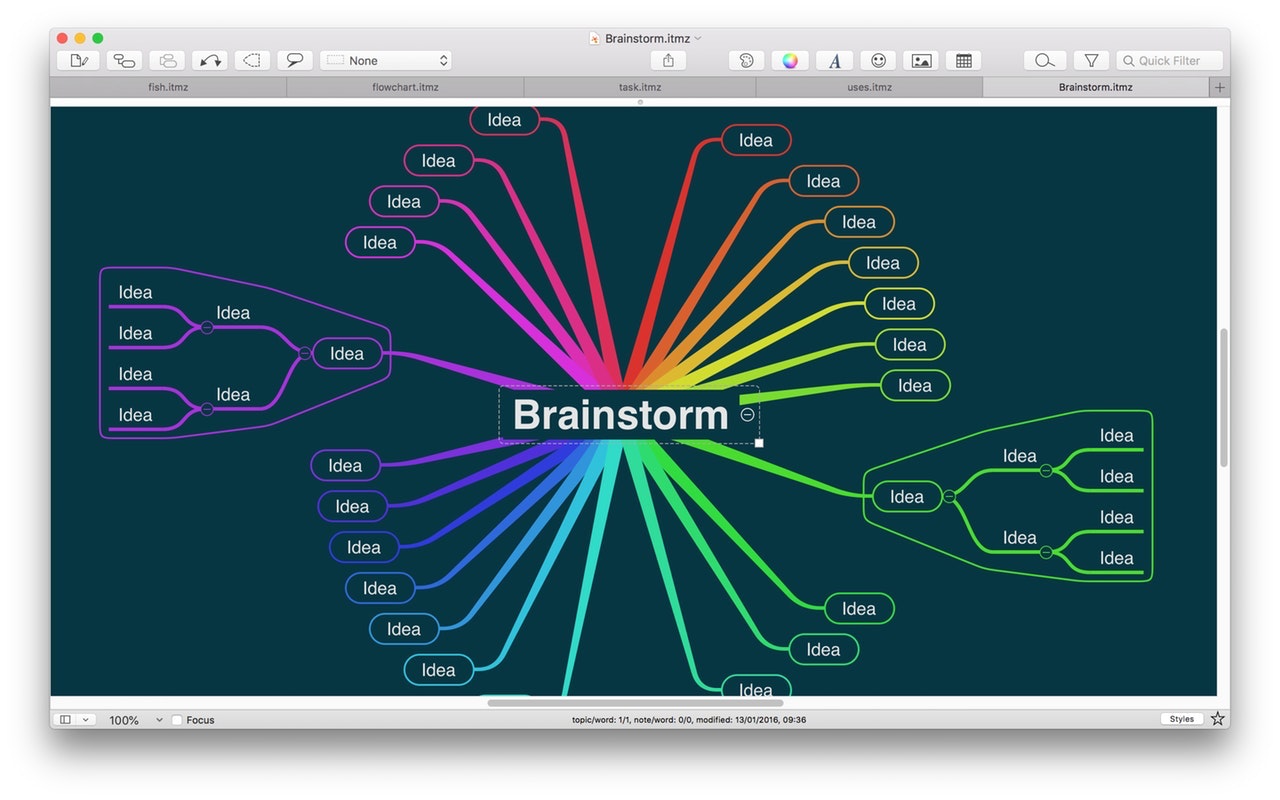 Pick colors for your app

Choosing how to design an app is key and, in a world dominated by flat design and minimalist app icon designs, picking the right color is a big part of that! Like that paint sampling machine at your local hardware store, Sip allows you to upload or scan images with shades to find their component colors: 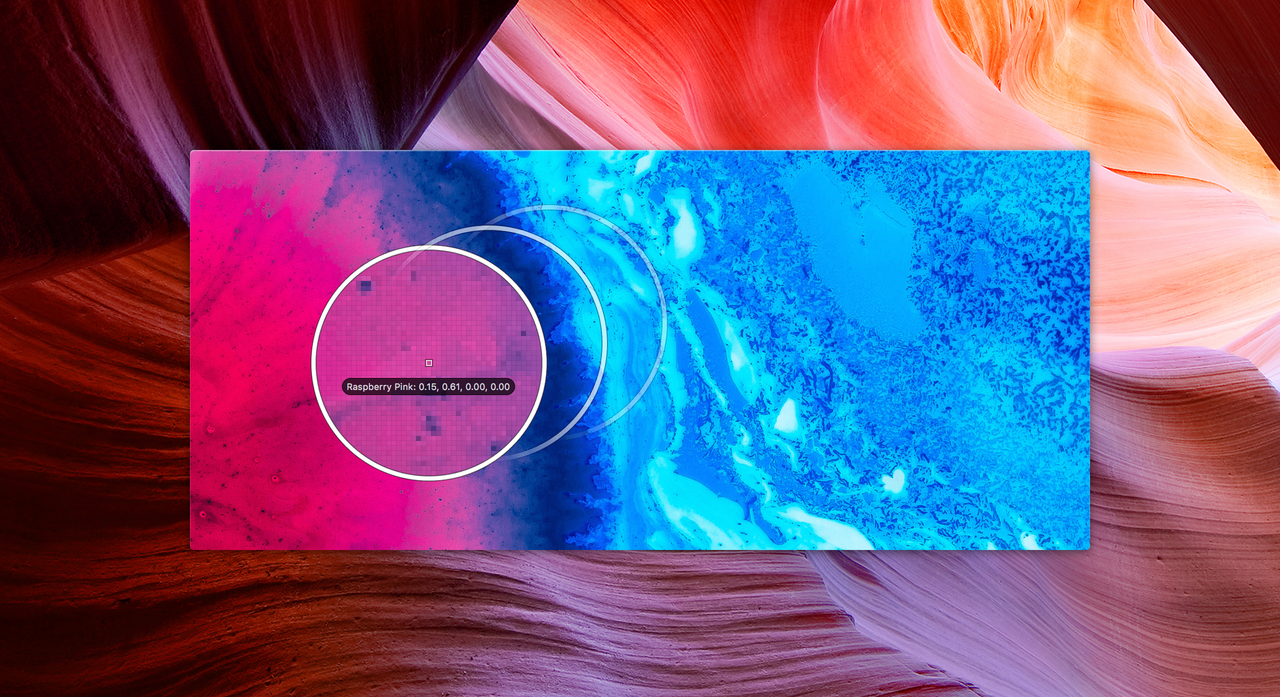 If Sip doesn’t offer up all the information you’d like to have at your fingertips, then Aquarelo makes it easy to put a name (or at the very least a comprehensive color code) to a face with support for up to 36 standard formats and 46 color profiles (21 RGB, 25 CMYK). 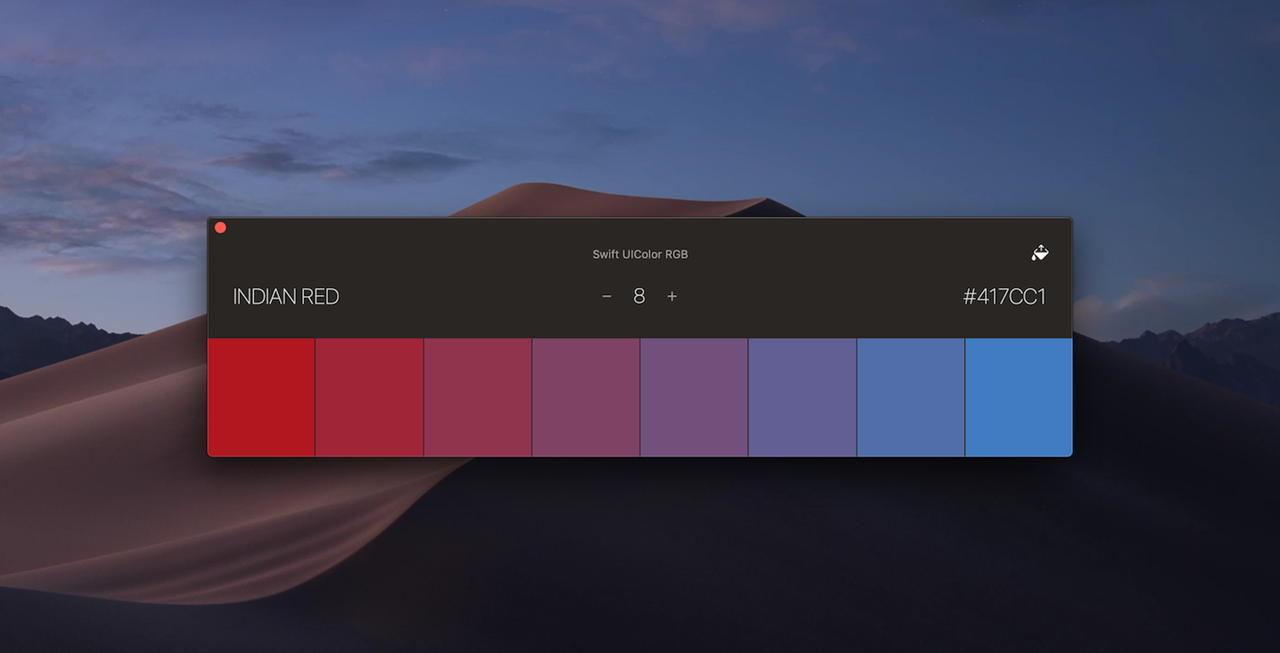 You can also use these apps to build and manage your own custom palettes (Aquarelo, in particular, is great for this), and pull them over to Photoshop, Sketch, Illustrator, Xcode, and so on.

Before you transition to the main part — coding — make sure you create a prototype or at least a few basic mockups to see what your app screens will actually look like. There’s a great app called Flinto on Setapp, which can help you build app design prototypes of any complexity. 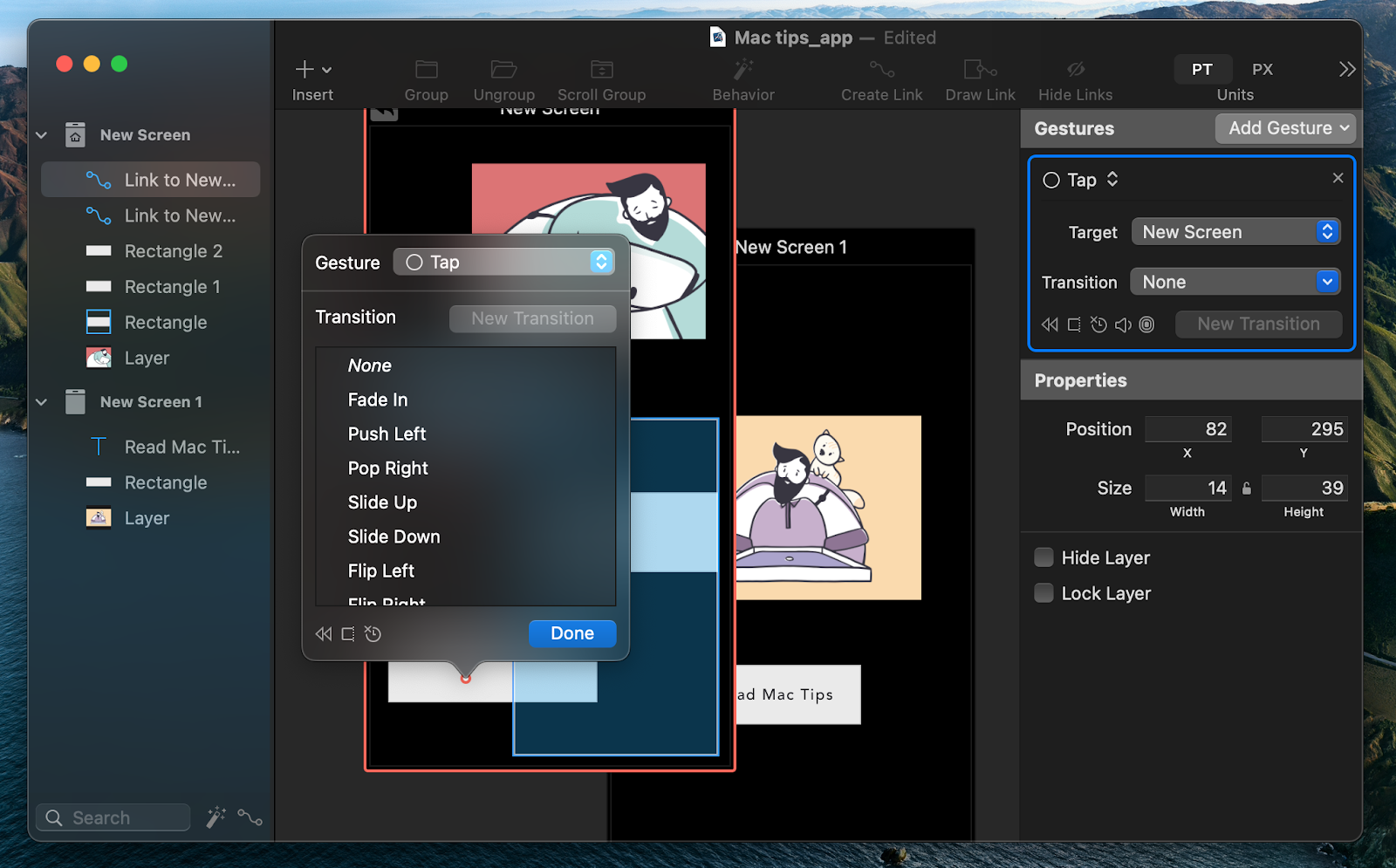 It’s not just putting images and text blocks on a screen — Flinto comes with a dedicated Behavior Designer so that you build links across buttons, add scrolling areas, and even design animated transitions between screens. Create your prototype from scratch by combining custom elements, or import files from Sketch or Figma.

Once you’re ready with your prototype, use Flinto to export and preview your app design on iOS. This step is the most essential while it will help you see your app before it’s been created, and therefore avoid many mistakes.

Write code for your app

For a long time, Objective-C was the standard for the development of iOS apps. In 2014 Apple introduced Swift, calling it “Objective-C without the C,” as their coding language and (arguably) made life much easier for developers. Once you’ve picked up some knowledge of Swift, you’re more or less good to go!

When you do start coding, you can make your life easier with a tool like CodeRunner. Getting started is really easy: 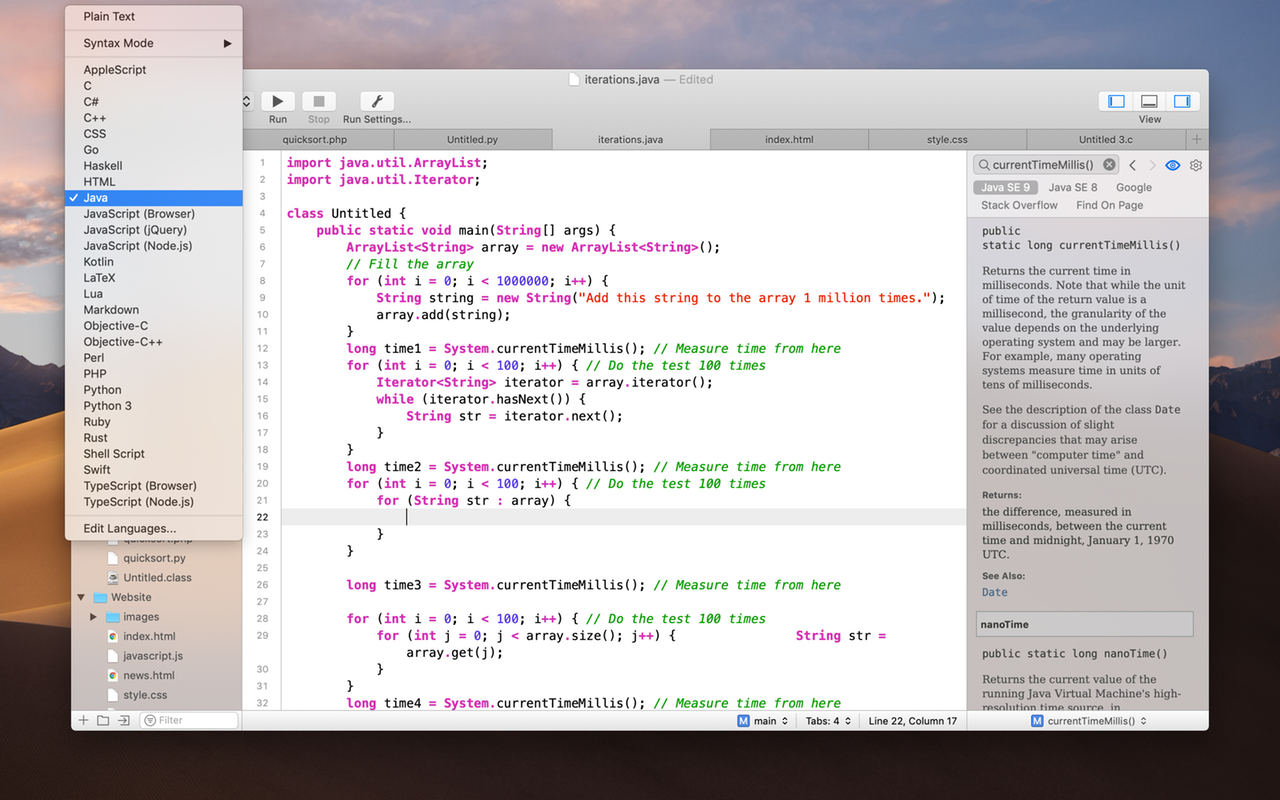 In addition to being great for throwing together a quick PHP backend, this app allows you to write, run and debug code in more than 25 languages (including Swift and Objective-C) and boasts useful features like IDE-level code completion.

If you’re using Swift, PHP, or HTML for a project then it might be worth taking a look at TeaCode, which comes with over 70 built-in expanders. You can also create new expanders yourself if there are functions that you’re going to be using over and over (and over…) again. 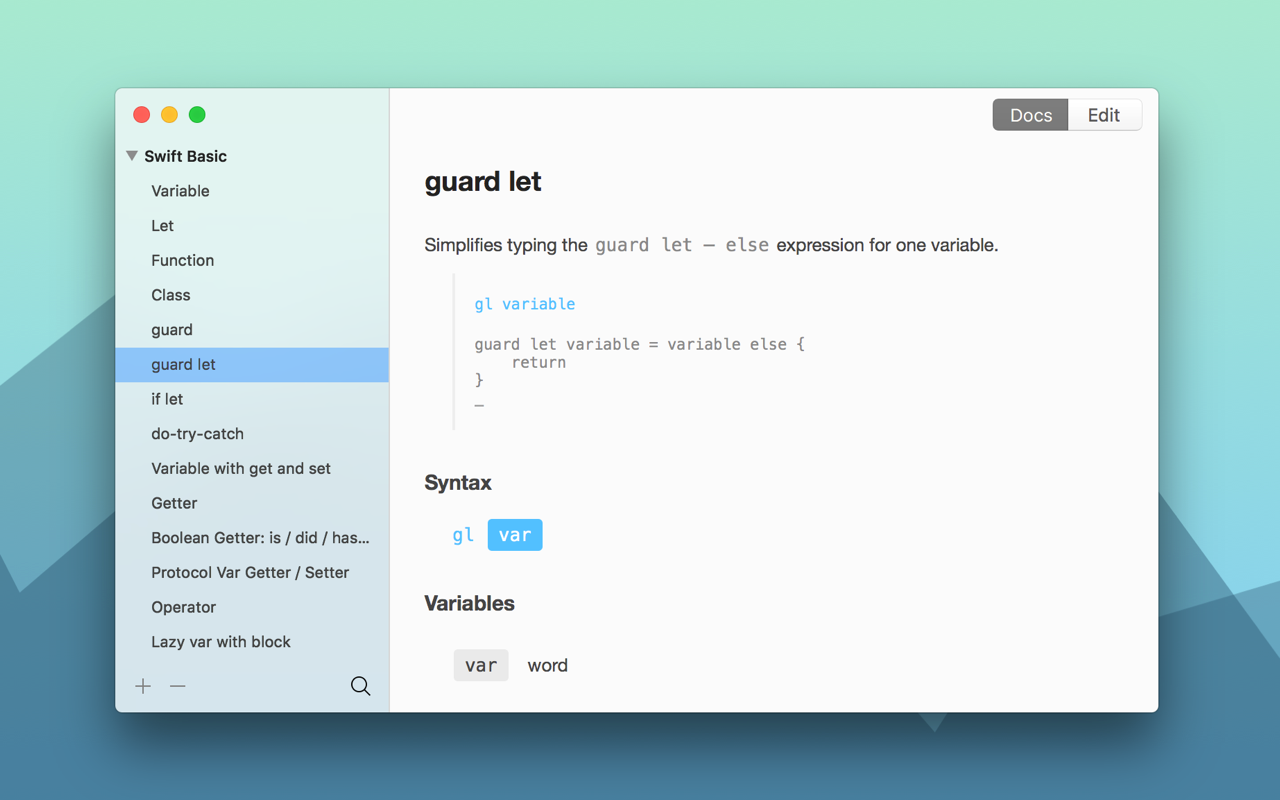 At the end of the day, anything you can do to make the process of coding a little quicker is worth doing. That’s even more true if you’re working on your app as a side project or are trying to bootstrap things. The quicker you can move, the earlier you can get the app submitted to Apple and move into beta-testing stages.

Building and extending your app

It might seem like running before you can walk, but it’s never too early to start thinking about APIs and making sure that your app can play nicely with others. If your app is popular enough, a paid or freemium API can represent an additional revenue stream that many developers leave untapped.

API development comes with plenty of potential pitfalls of its own, so it’s not something to be undertaken lightly, but an app like RapidApi is certainly useful for getting to grips with writing and testing parametrizable requests.

If nothing else, considering how your app could make use of existing APIs (or how building one for your own app could benefit you) is a useful exercise because it prompts you to think about features that may be missing in your offering and help to dictate your future direction as you develop an app.

We’d love to be able to tell you that, once you know how to make an app, that’s the hard part over. Unfortunately, as we’re sure you’ve already figured out, that’s not the truth. Successfully releasing and marketing your new app is the next step in the process, and it’s not an easy one.

When it comes to apps, building your product is just the beginning. Whether you’re seeking steady growth or instant virality (the first may be less sexy, but it’s also more sustainable!), you have a long road ahead. However, as we’ve seen above, taking the first step on that road doesn’t have to take months or cost the earth!

But with all the apps mentioned in this article being available for a free trial on Setapp, along with over 200 other top apps, you can be all set and running towards creating your app within record time.