Get a secure archiver app
Compress and unpack any files on Mac with Archiver.

All of us from time to time receive digital archive packages, whether they are downloaded online or get sent over by our friends. Occasionally, we might be even packaging and distributing archives ourselves. But few of us stop and think why exactly do we do this.

In general, archives help us achieve two essential goals: decrease file size and unite a group of files into a single package. The first goal relies heavily on a compression algorithm and thus differs from format to format, whereas the second goal is equally achievable by all popular archivers on the market.

RAR is a file format for an archive. Eugene Roshal developed the format in 1993, and the name of the format is short for Roshal Archive. This file format's primary purpose is data compression to save space.

Creating RAR files is only possible with licensed commercial software, like WinRAR for Windows or command-line RAR (also supports macOS)

There are literally dozens of archiving formats in existence, but it’s likely that you’ll only ever meet two: ZIP and RAR. ZIP has been around for more than 30 years and is easily readable by your Mac’s default archiving utility. RAR, on the other hand, is a proprietary archiving format that requires a RAR opener for Mac to operate. So how do you open .rar on Mac?

Unfortunately, you can’t open a RAR archive with Mac’s default tools due to the format’s closed proprietary nature. RAR itself is an acronym for Roshal Archive, as it was developed by a Russian software engineer Eugene Roshal.

In terms of usability, RAR is not as popular as ZIP, but offers a better compression algorithm and, most importantly, works with large files. While ZIP taps out at around 2 GB, RAR can take up to 8 EiB (the number so large it’s practically infinite). The price you pay is having to find and download a sort of WinRAR for Mac utility.

Open any file on Mac

Without a doubt, Archiver significantly expands on the functionality of the Unarchiver. But it’s still mostly suited for one-off files and archives. If your line of work requires you to use archives on a daily basis, you need a RAR opener for Mac that supports presets, such as BetterZip.

BetterZip is a robust Mac unarchiver that supports all the same functionality when compared to Archive, with one significant distinction — preset workflows.

With BetterZip, it’s easy to create complex action sequences for all kinds of archives and process dozens of them in seconds. To create your own preset with BetterZip: 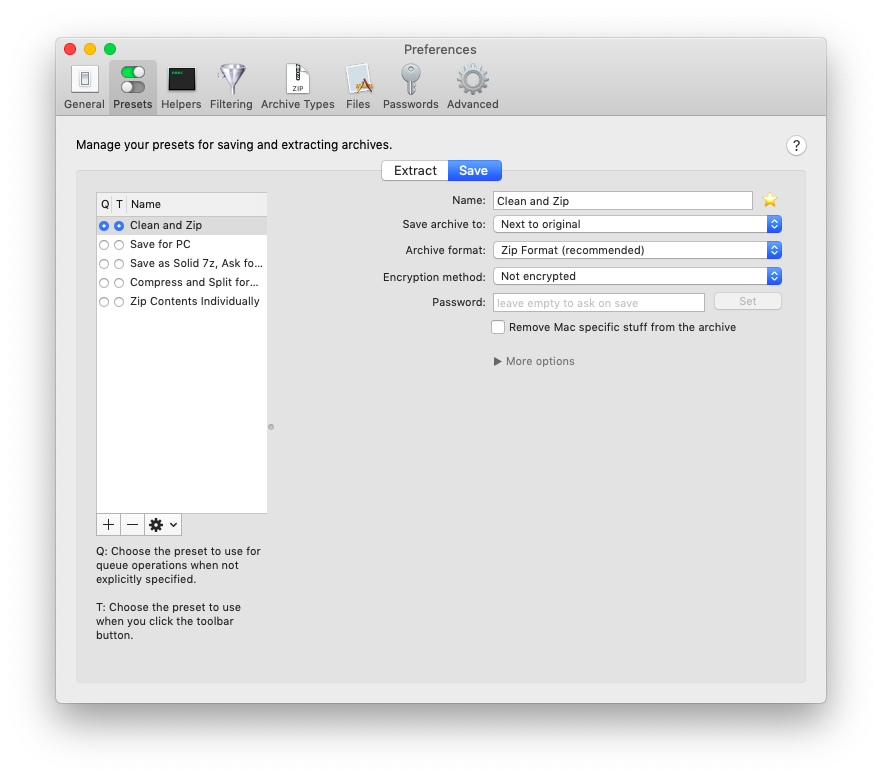 To use a preset, simply drop the files onto BetterZip and then click and hold either Save or Extract button in the top menu to select one of the available options.

Start with a well-known RAR extractor for Mac

While the actual WinRAR for Mac doesn’t exist, as it only works on Windows, there is no shortage of archivers that support RAR files.

An example that comes to mind immediately when someone thinks of how to zip a file on Mac is Unarchiver.

Unarchiver is a free simple tool that lets you, well, unarchive hundreds of file formats, including RAR. Originally developed by Dag Agren over 10 years ago, it quickly gained millions of users due to its unobtrusive interface and fast performance. To open .rar on Mac with Unarchiver: 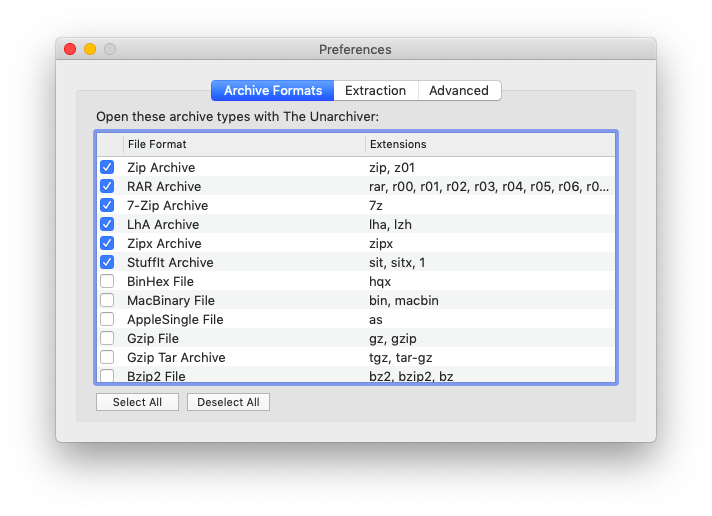 Due to its simplicity, however, Unarchiver omits a lot of features. For instance, it doesn’t itself compress files and doesn’t allow to set passwords or peek inside the zipped folder. So if you’re working with archives on a regular basis, it’s much better to use an actual full-featured unarchiver for Mac.

Use a pro-level Mac unarchiver

When you need to do more than simply find out how to unzip files on Mac, you need to use apps that were designed with all the extra functionality in mind. One of those apps is Archiver.

Archiver can easily open RAR files on Mac, but also create new archives, compress them, encrypt them, and split them into multiple volumes.

Grab Archiver—free to try with Setapp. Simplicity and unrivaled file opening power in a single app for Mac.

Starting with Archiver is a no-brainer due to its intuitive drag-and-drop interface:

Alternatively, if you want to create a RAR archive: 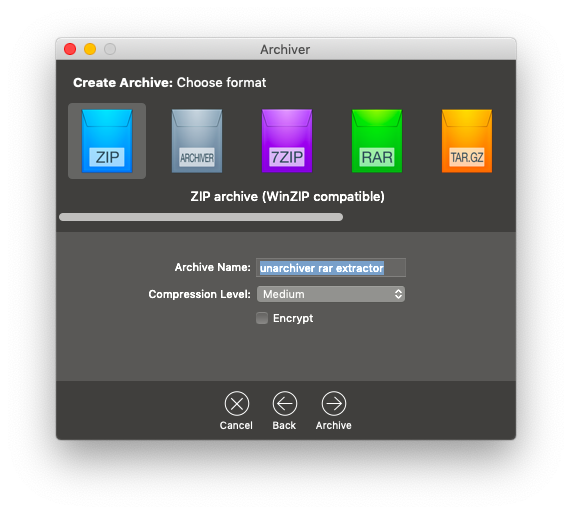 Another neat Archiver feature is the ability to split your archives into multiple volumes. This is handy when you need to send a large file, like a movie, over email. To do that, simply choose Split when adding your archive to the app and select the appropriate size for each resulting archive.

How do I open RAR files using Terminal

Next, install open-source package manager Homebrew using directions on the software’s official website. As of the time of this writing, the installation command is /bin/bash -c "$(curl -fsSL https://raw.githubusercontent.com/Homebrew/install/HEAD/install.sh)", but we recommend you to double check that it’s still up to date.

Then, use Homebrew Terminal command to install the unarchiver element:

Finally, type in the unar command, then drag and drop your archive onto Terminal for it to generate the path to your archive. Press Enter to unzip your RAR file, it will be saved to your user folder on Mac. To save it to the folder of your choice, navigate to the respective directory in Terminal or move the files after they are unarchived.

You can also locate your folder with unarchived files through Finder > Go > Go to Folder… > type in the name of your archive or Finder > Go > Recent Folders.

Zip and unzip files with ease

Now you that know how to unzip a file on Mac and even create your own archiving presets, you can enjoy the benefits of archiving files more often. It’s generally a good idea to archive files whenever you send them, sort of like putting your parcel in a safe package before going to the post office in real life.

Archived files are less susceptible to errors and damage, and more likely to arrive to your recipient in mind condition: especially when it concerns folders with multiple files and media, such as movies and music.

Use a full-featured RAR extractor for Mac that executes the archiving tasks quickly and gives you many more archiving options overall. Whether you choose Archiver or BetterZip, how to open RAR files on Mac, or in fact any files, won’t be a problem anymore.

Best of all, both Archiver and BetterZip are available for you to try free on Setapp, a platform of more than 200 top Mac apps that solve any problem you happen to come across. Pack your files and send them away!

FAQ about how to open .rar on mac

How to open RAR files online?

You might prefer unpacking your RAR files not directly on your Mac, but online. There are a number of tools available for you to use. We’ve tried ezyZip and Archive Extractor Online. Both can extract multiple RAR files that you drag and drop from your Mac.

With online tools though, you have to be cautious about their safety as well as your data. We’ve checked both these tools in Google Safe Browsing site status checker and as of December 17, 2021, both returned the green No unsafe content found results.

Can I change a RAR file to a ZIP file on a Mac?

You can convert your RAR file to ZIP easily in Archiver — just drag and drop your archive, choose Convert, and select your desired format.

Additionally, you can use BetterZip to do that same action through it’s Save button, which allows you to save your RAR archive as a ZIP.

Are RAR files safe for Mac?

In and of themselves, RAR files are just another archive. Your Mac can easily handle them with third-party tools we’ve outlined in this post to unarchive and archive files. RAR files that contain malware are the only type you should be wary of — don’t download, unarchive, or open RAR files from the internet or unknown sources.