Get NetSpot to stay in control of Wi-Fi quality, anywhere.

Accessing the best wifi channel in your home or office (or home office!) can make all the difference in the world. Most routers have several wifi channels, but not all have the same signal strength or range.

Selecting the right wifi channel isn't always as easy as it seems. Signal strength is only one metric for measuring performance. Depending on the size and layout of your building, there's a good chance the strongest signal isn't even the right one for you!

Somehow, a fast wifi signal has become the latest tech vanity metric. Here, we'll show you how to check wifi channels, analyze your signal strength and reliability, and tell you about a WiFi analyzer app we really like.

Check for the best WiFi channel

Choose the best WiFi channel with network analyzers. Best utilities in one pack, give it a go!

Which channel the best for WiFi

Deciding which wifi channel is the best option is highly subjective. There are myriad factors that can influence which signal is actually best for you.

There are two major wifi bands: 2.4GHz, and 5GHz. The 2.4GHz band is technically slower, but has the distinct advantage of being able to reach further than the 5GHz band.

And the 5GHz band is much faster than the 2.4GHz band, but you have to be fairly close to the router, and the 5GHz wifi band has trouble with objects like walls or doors. If you're in the same room as your router, and your machine has a direct line of sight, 5GHz is typically your best bet.

Because the 2.4GHz band reaches further, there's a chance you'll see interference, though this is typically a problem for older routers.

How to scan for WiFi channels

Your first option is to identify which wifi signals are available to you. Here's how to check available networks on your Mac:

This is how to see all the wifi networks available to you. As you can see in the screenshot above, a normal environment will have tons of wifi signals available for your Mac. Most are likely locked, as they're private, but this is a good illustration of how crowded the airwaves are for wifi signals. Also, read our article how to see wifi password on mac.

Your Mac's built-in wifi analyzer is great for identifying which channels are available to you, but going beyond that requires a lot of fiddling with settings most of us won't be comfortable with. Instead, we have two options you'll want to check out: NetSpot, and Wifi Explorer.

NetSpot is a robust wifi channel scanner that returns a ton of data. On its main screen, you'll see all of the available networks in your area. This is handy, but NetSpot takes it a step further in offering granular details about your signals.

In addition to bands, channels are critical. In the screenshot below, we'll focus on two areas: channel, and level (SNR). 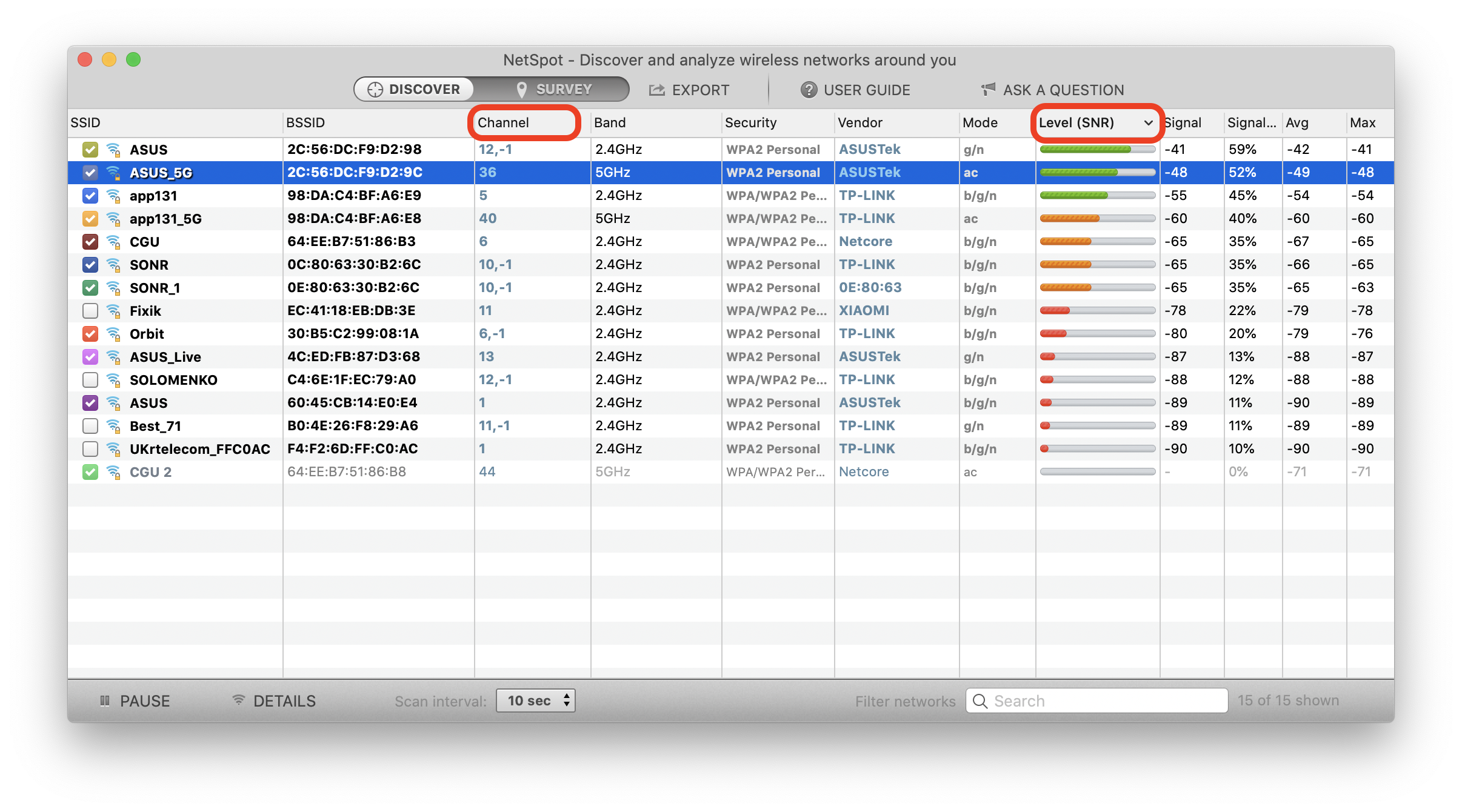 Channels are like fine-tuning for wifi bands. As an example, if your whole neighborhood was on a 2.4GHz band, and everyone was on channel 6, there would be a lot of interference. Everyone is on the same band, on the same channel, and it gets noisy.

Bands also have unique channels available to them, and each channel has unique resonance. In NetSpot, navigating to 'Discover >  Show details of selected networks' from the menu bar brings up a new window.

Navigating to the specific channels tabs gives you details about the band channel frequency: 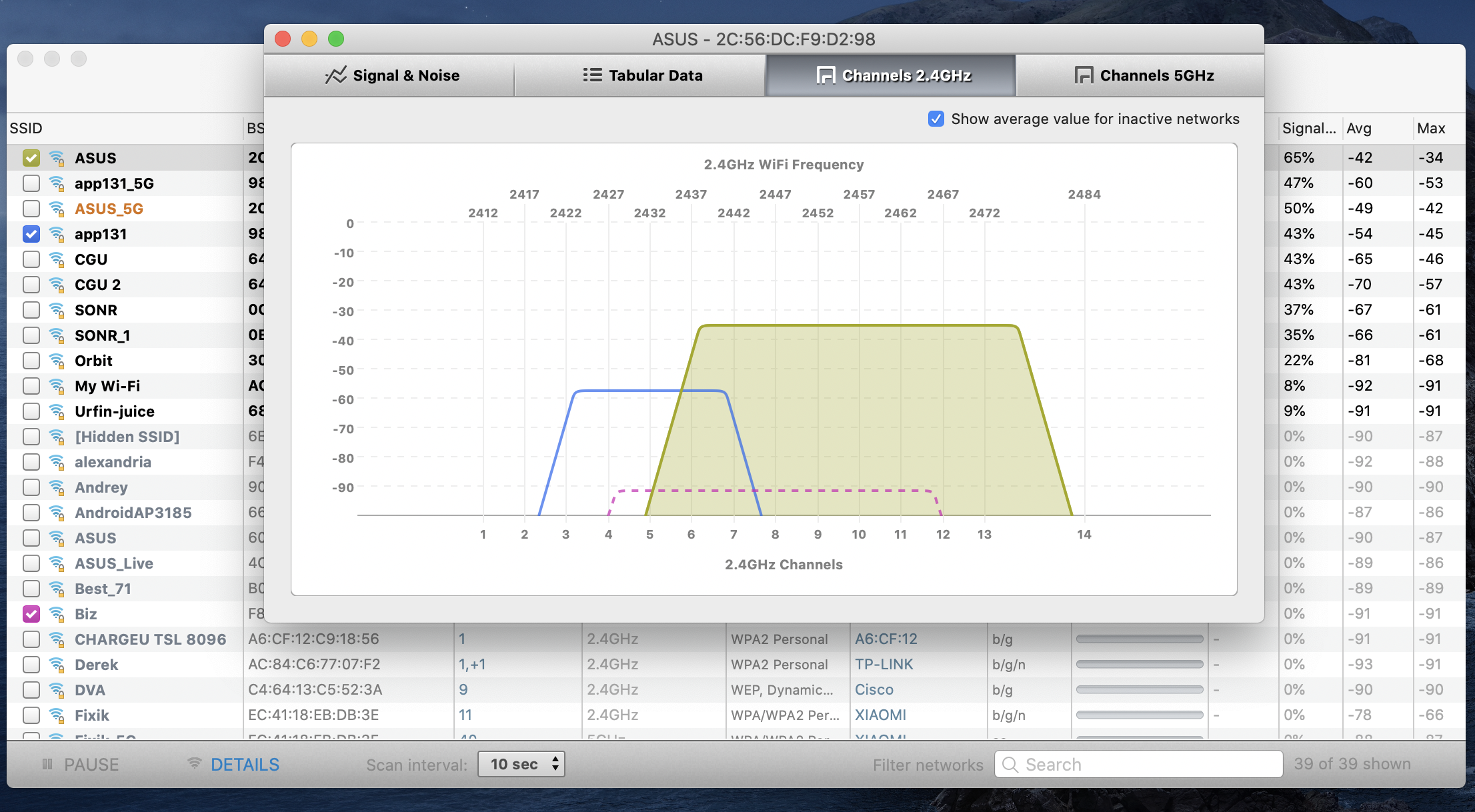 Let's take it a step further. If we isolate NetSpot to one wifi band, we can see its channel, and signal strength shown in both the menu and chart. We're on channel 10, and our signal strength is -41. (For signal strength, numbers are negative, and zero is the best you can get.)

Taking NetSpot one step further, toggling to the 'survey' tab on the top of the window brings up the option to add a map of your room, home, or office. This allows you to create a heatmap of your area, which analyzes your home or office (or in this case, the home office) to see where the signal is strongest. 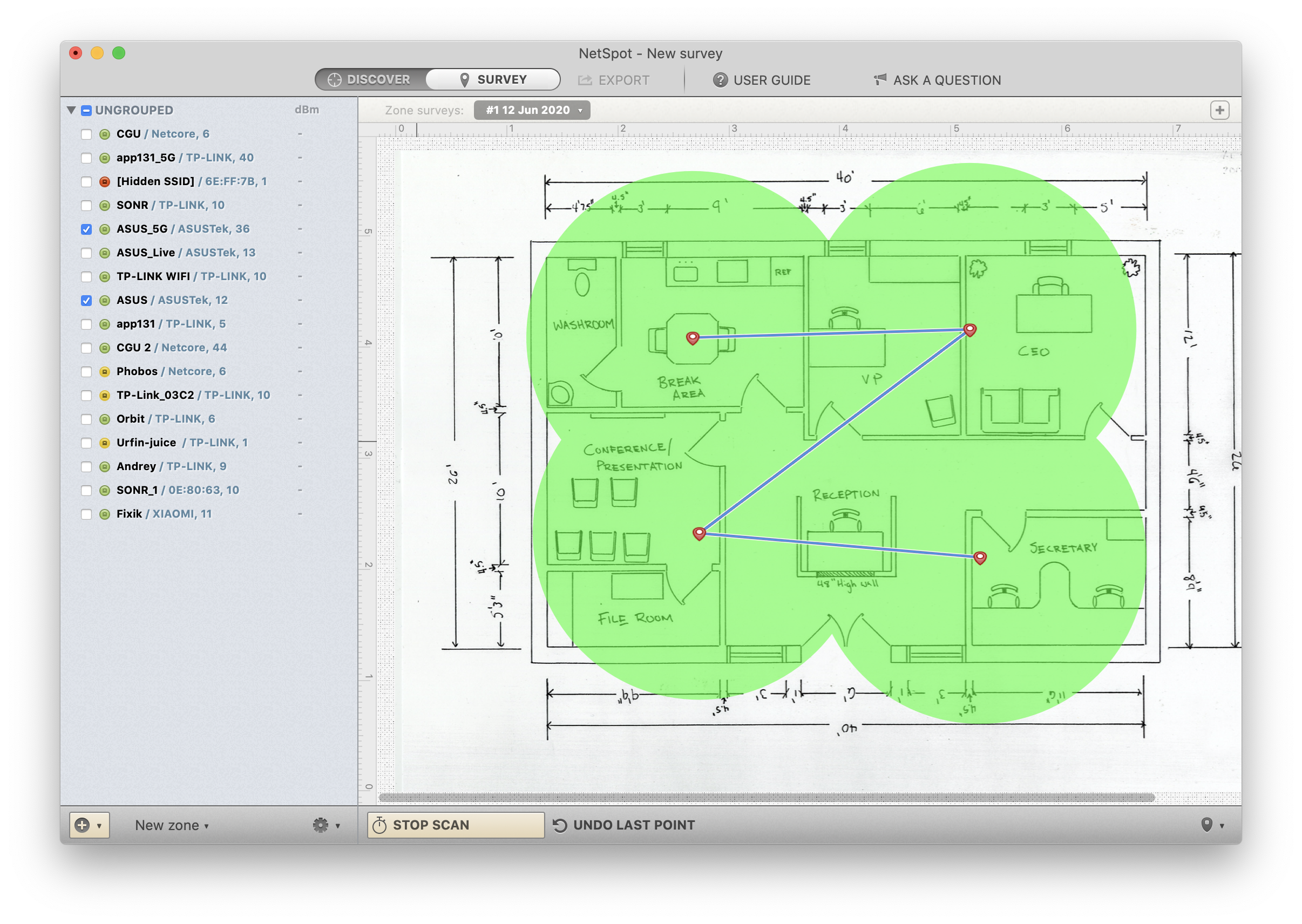 This helps for a few reasons. One, you may find out your router is not in the optimal location. Second, you might need to create a proper mesh network to saturate your surroundings with the strongest signal. (Our example is a bit skewed; the router is in the same room, so our signal is really strong!)

Wifi Explorer surfaces a lot of information, just like NetSpot. It's a really strong wifi channel analyzer and wireless channel scanner, and we enjoy its minimal interface. 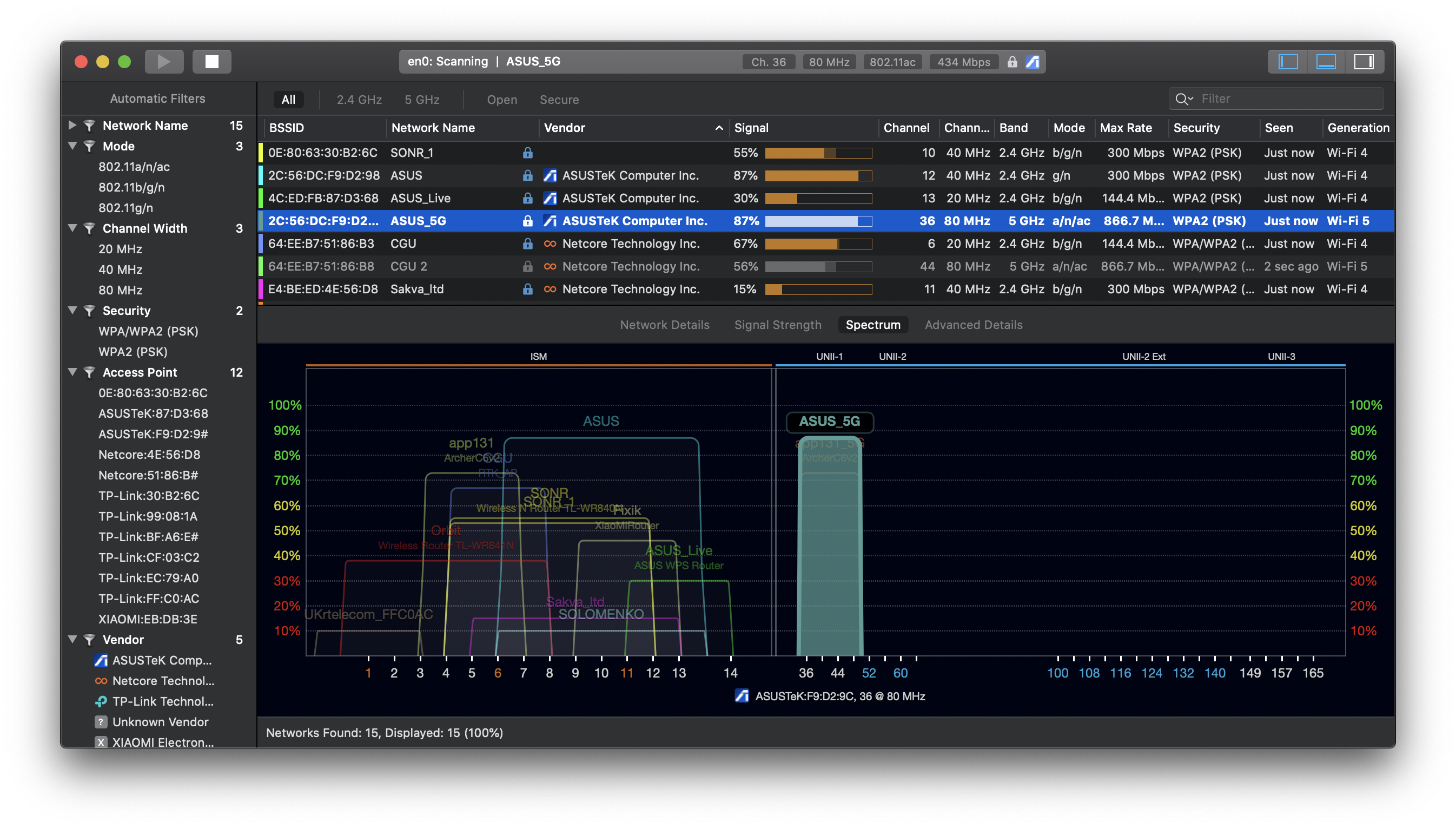 But it also returns a ton of information. As a wifi tester, it's a really strong app; you'll see a lot of data about your networks. There's an option to toggle additional views on the top right of the Wifi Explorer window, which brings up some handy views.

You can filter results based on network name, mode, channels, security, access points, and vendor on the left. The right side of the screen can show you any known network issues.

The bottom pop-up is where a lot of value is envisioned. This shows you your signal strength, and which bands and channels are available. Each 'tower' in the band segment is a router; each tower in the channels portion is a network.

This view shows you immediately, and in real-time, which bands and channels you're using, and which are strongest. The main view provides all the same data as NetSpot.

What is the best WiFi channel?

The best wifi channel is the one with the strongest signal and limited noise. Your router should automatically surface the strongest band/channel combination for you. If you need to know how to change wifi channel for your Mac, it's not simple. You essentially have to create a network from scratch and assign a channel to it. Chances are, simply toggling your wifi or resetting your router will take care of any issues, and both are far simpler than setting up a new network.

If you want to switch networks, that's simple. In your Mac's menu bar, select the wifi icon, and just click on the wifi network you'd like to join. 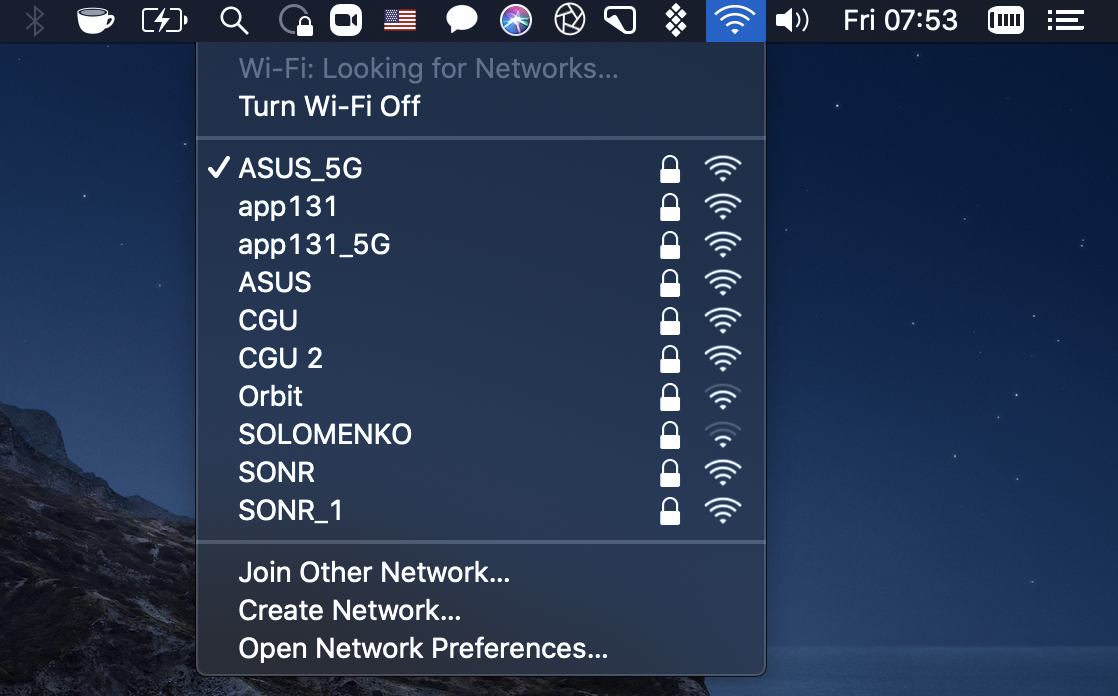 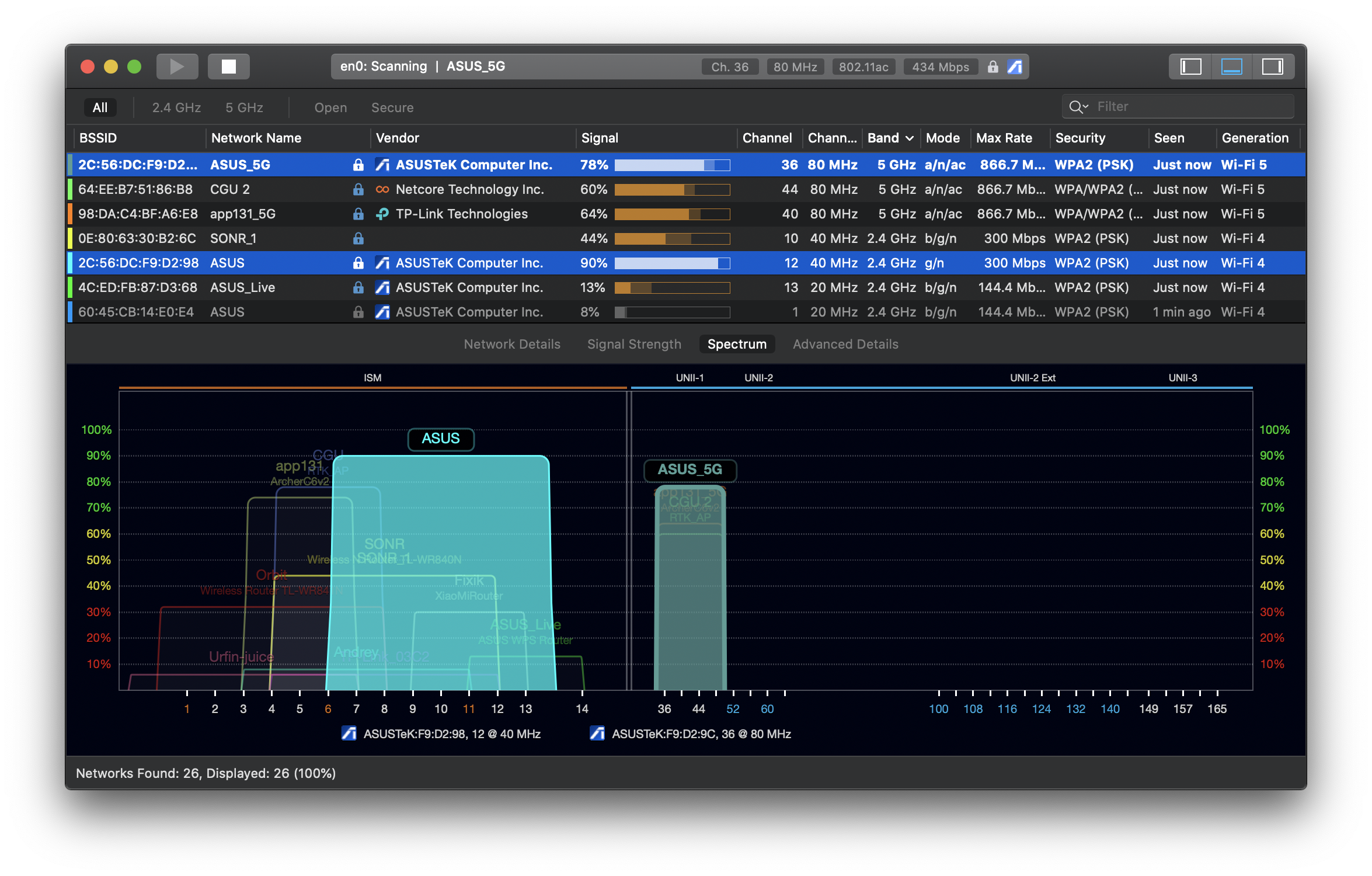 If you're looking for a wifi channel scanner online, there are no services we've found that should be recommended. Because wifi is a network connection, it's difficult to identify from a remote location, and really should be done locally.

In a wirelessly connected world, finding the best wifi band and channel matters. Typically, the ones available to you on your machine are the best options.

Discovering which are really the best can be tricky unless you have NetSpot or Wifi Explorer. Many times, people change networks and hope for the best, but you can do better. Both NetSpot and Wifi Explorer surface critical data about your wifi networks, which is a lot smarter than taking a stab in the dark at improving your connectivity.

We also like that NetSpot and Wifi Explorer are free! Both are included with a seven-day free trial of Setapp, the leading productivity suite for your Mac. Setapp's growing library already consists of dozens of app titles spanning just about every use-case imaginable. Design, development, email, news, education, finance – you name it!