Get Capto for screen recording

Record any part of the screen and edit video easily.

You may also need to record your screen if there’s an issue with an app or your Mac. When troubleshooting issues, customer service representatives often ask that you record your screen so they can see exactly what’s happening when you encounter issues.

Rather than videotape your screen Mac computers have built-in screen recording services – they’re just not always what you’re looking for. This is why a good Mac screen recorder is so important. Here we’ll show you how to video capture on Mac, which screen recorder Mac has built-in, and which apps you should download for recording your screen.

Common Reasons to Record your Screen on a Mac

Here are a few common scenarios and situations where the Mac record screen function is useful:

Saving a GIF. Ever found a GIF you like that you can’t download? When this happens, Macintosh screen capture video tools are a lifesaver. Just record the GIF and save it to your Mac!

These are just a few of the scenarios where recording your screen is useful, but we’re sure you’ll think of plenty of other reasons you’ll want to know how to record your screen.

How to screen record on Mac

There are several ways to record the screen on your Mac. To screen record Mac has built-in tools, but there are downloadable apps that are far better.

Can you screen record on Mac without downloading anything? Of course! Apple has built-in tools that capture still photos as well as video. You can record the entire screen, or choose to capture a portion of what’s on the screen. Here’s how to use Apple’s Screenshot app to record your screen:

Remember the Screenshot app has a section named “Options” that lets you choose where screenshots and recordings are saved, and whether you need a timer before capture begins. A timer can be helpful of you want to start a video before screen recording begins.

The Screenshot app is simple and effective, but not nearly good enough! It shows you how to record your screen Mac style, but to do something like annotate a screenshot you need to open Preview. How tedious!

Instead, give CleanShot X a try. It has a powerful annotation tool built right in for screenshots and becomes even more powerful when you want to record video.  It allows you to record full-screen video, or a portion of the screen, just like the Screenshot app. CleanShot X stands out with its snappy app selection tool; when you need to record an app, CleanShot X will limit the recording to the app you’re using and block everything else out of the recording. Amazing! 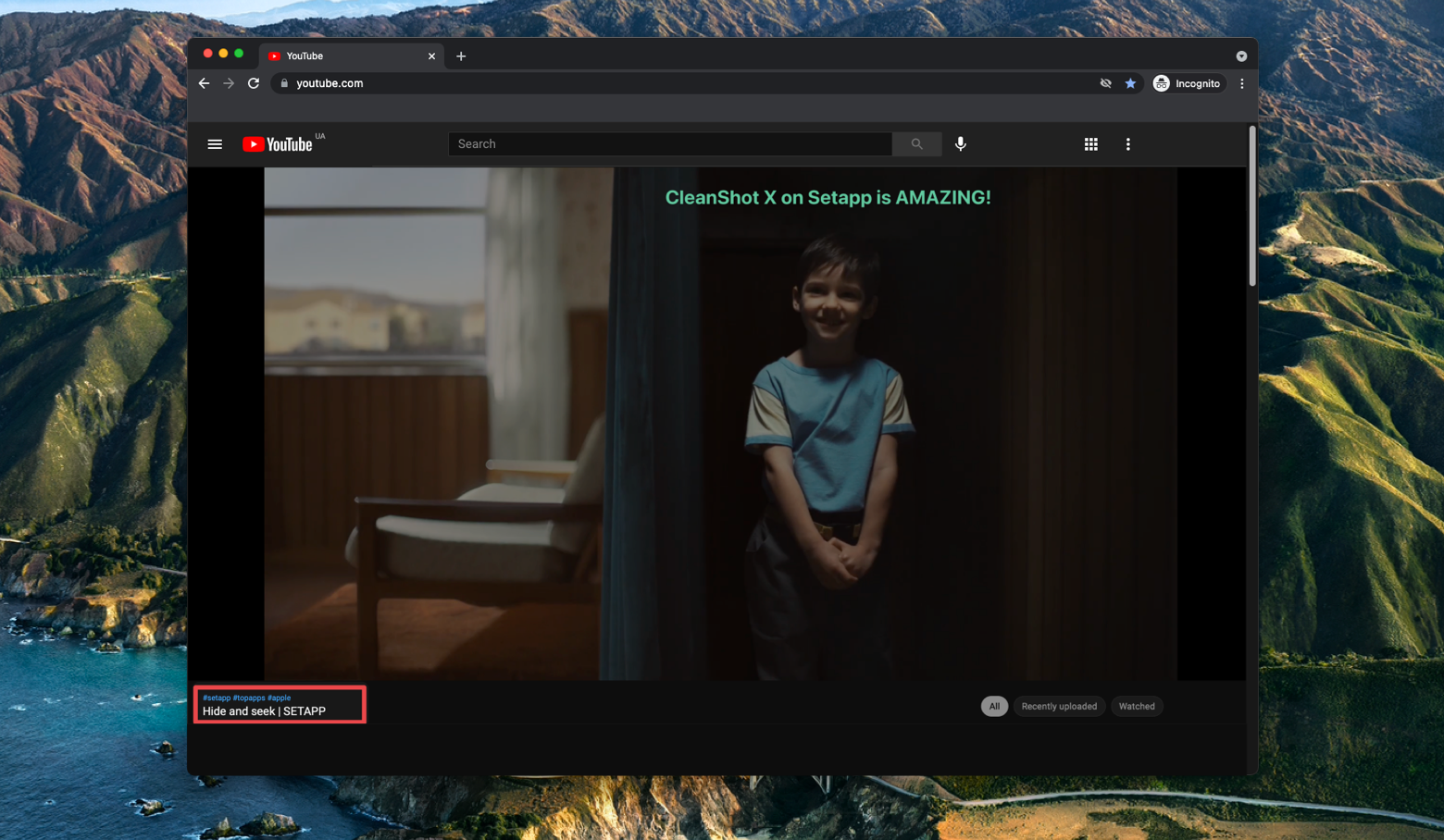 If you’re trying to record a video to turn it into a GIF, CleanShot X has you covered. You can record video in GIF format, and anything you record will be saved a a looping video, or GIF. No need to open another app!

QuickTime – you know, that thing you use to watch downloaded videos on your Mac – can also be used to record your screen. Don’t get too excited, though.

If you want to record your screen via QuickTime, here’s how: 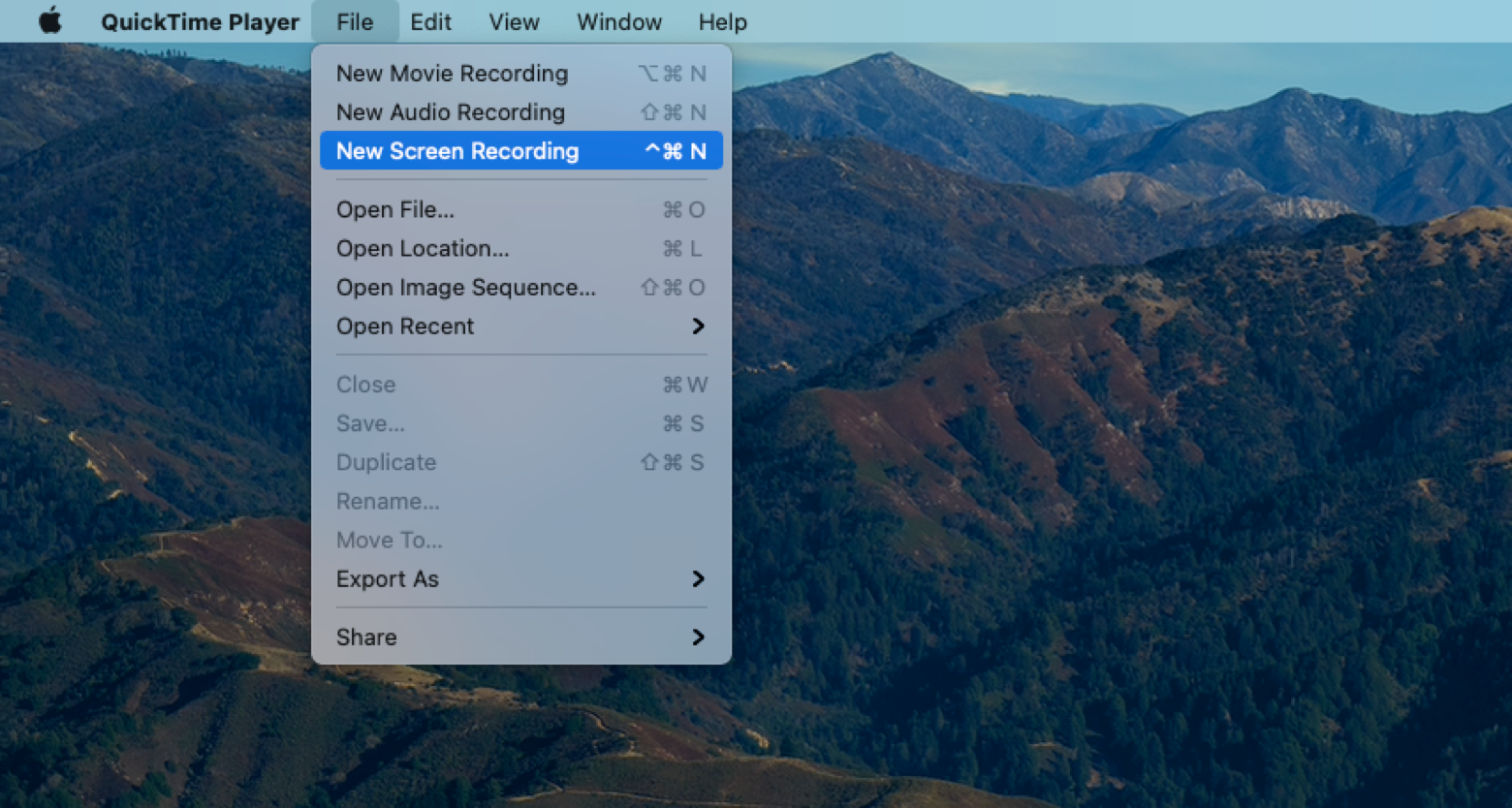 More often than not, we need to create a screen recording to share with our teammates. Yac was designed exactly for that purpose. Create quick video messages for your team with the recording of your screen in Yac — an asynchronous voice and video messaging platform.

Conveniently, you can share the video message via a link and your recipients can watch it in their browser if they don’t have Yac installed. What’s more, playback can be set at 1x, 1.5x, or 2x speed to get to the bottom of the issue faster, if needed.

Record bugs, explainers, walkthroughs, product demos, and anything you like with Yac tools. You can also choose to add your webcam feed to the recording before you start. And when you are recording, you can draw on your video as you record.

To create a recording in Yac, follow these steps: 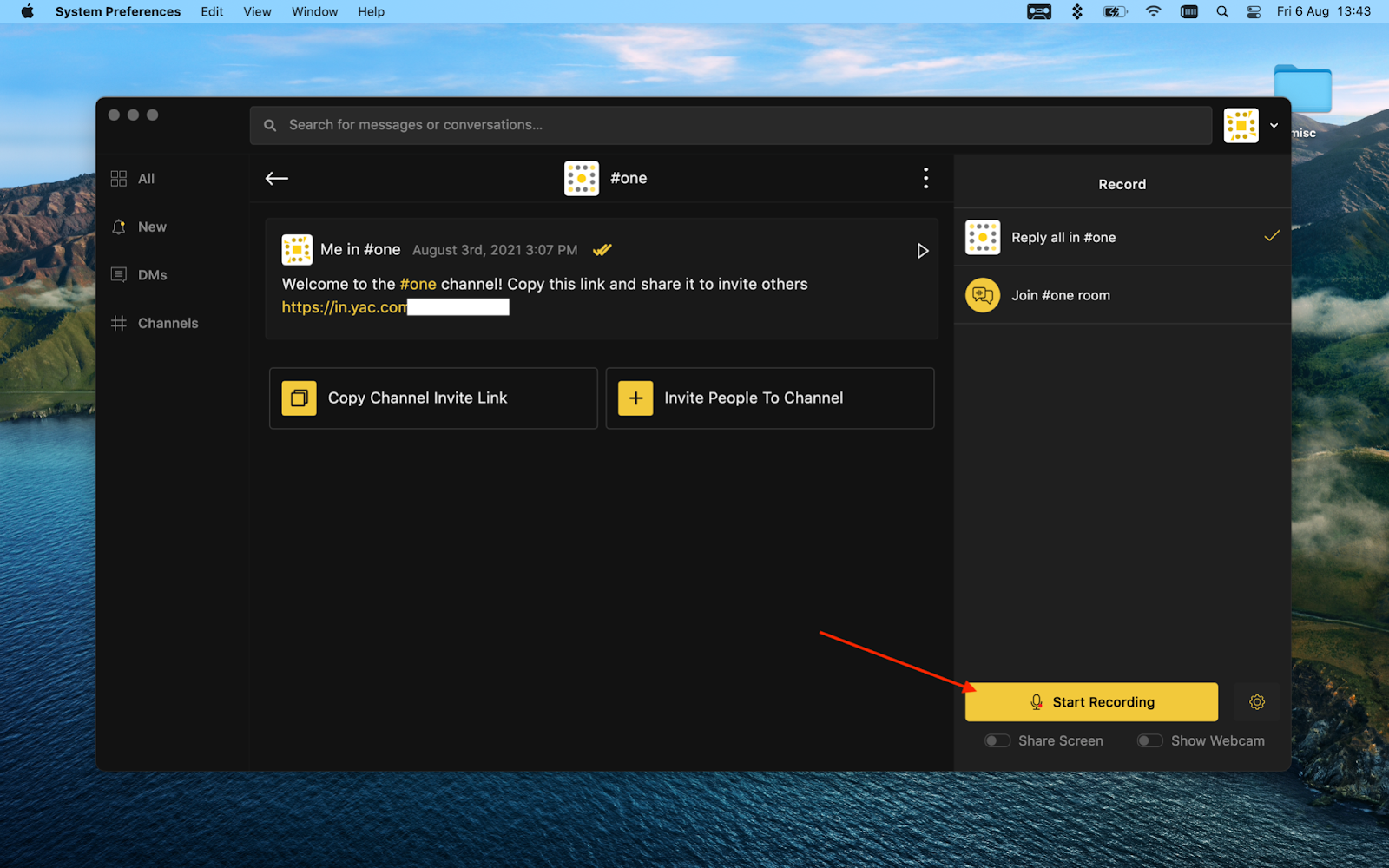 Screen record for collaboration with Tape

Tape is another great screen recording tool for your daily tasks. It lives in your menu bar and allows you to easily record your screen with a voiceover, webcam overlay, or neither. Tape can record app windows or your whole screen. And you can draw on your video with a built-in highlighter to mark key points of interest.

Depending on your needs, you can create MP4 videos or looping GIFs with Tape and either save them on your device or upload the tapes to a web dashboard and get instant links to your recording.

To record your screen with Tape, follow these steps:

The file will be saved on your device or to your web dashboard, depending on your settings. 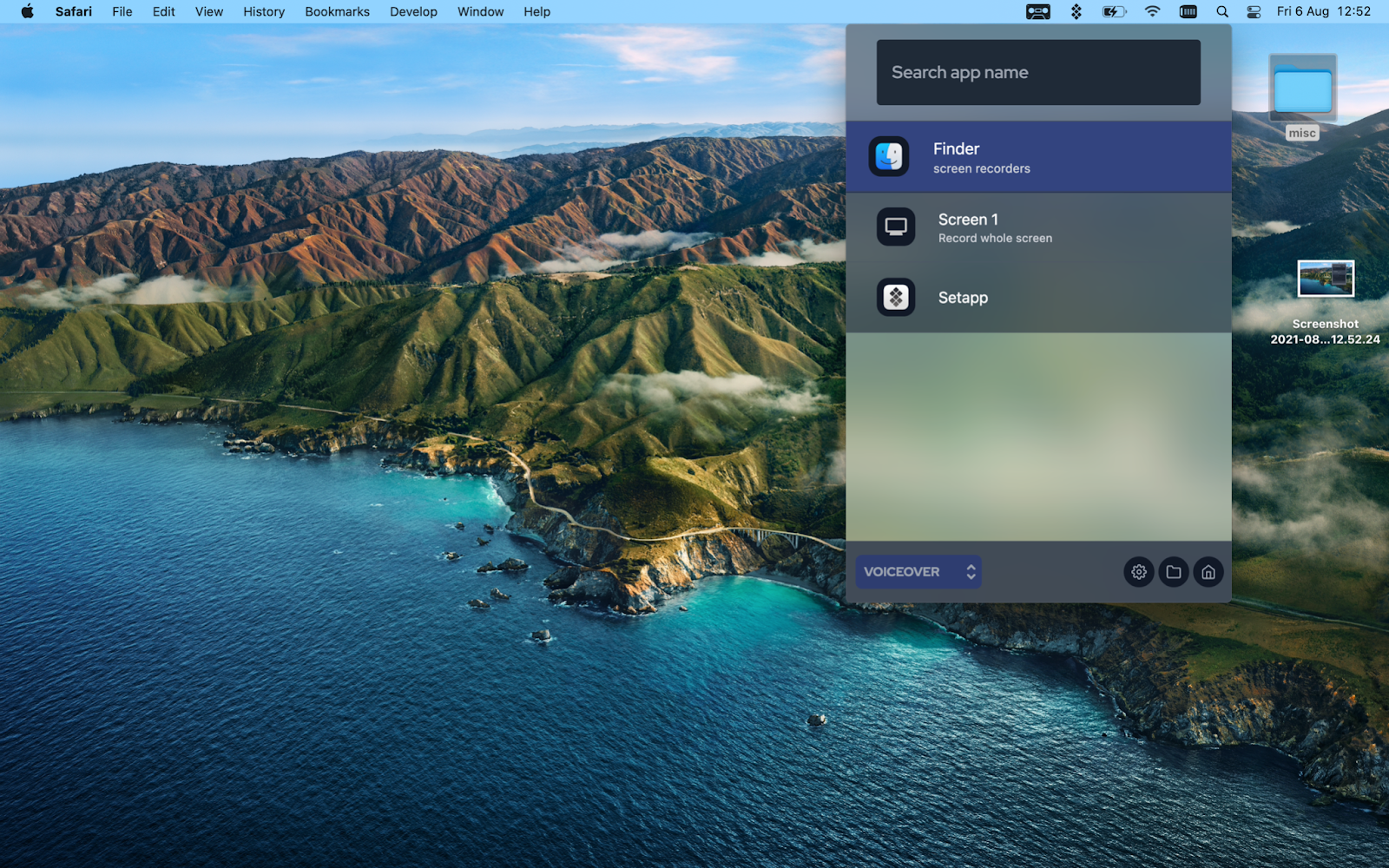 If we have to vote for one app as the best screen recorder available, it’s got to be Capto.

Capto via Setapp is as robust a screen recording tool as we’ve seen. Like any good screen recording app, it lets you capture the full screen or an area of your choosing. We really like that Capto can record a particular screen; helpful if you have multiple monitors and need to record one screen while doing tasks on another.

There’s even a desktop cleanup tool that clears your desktop during a recording so whoever watches you doesn’t see all your icons and folders cluttering the screen. Simple video editing tools like fade-in and audio tracks are available via Capto, too. 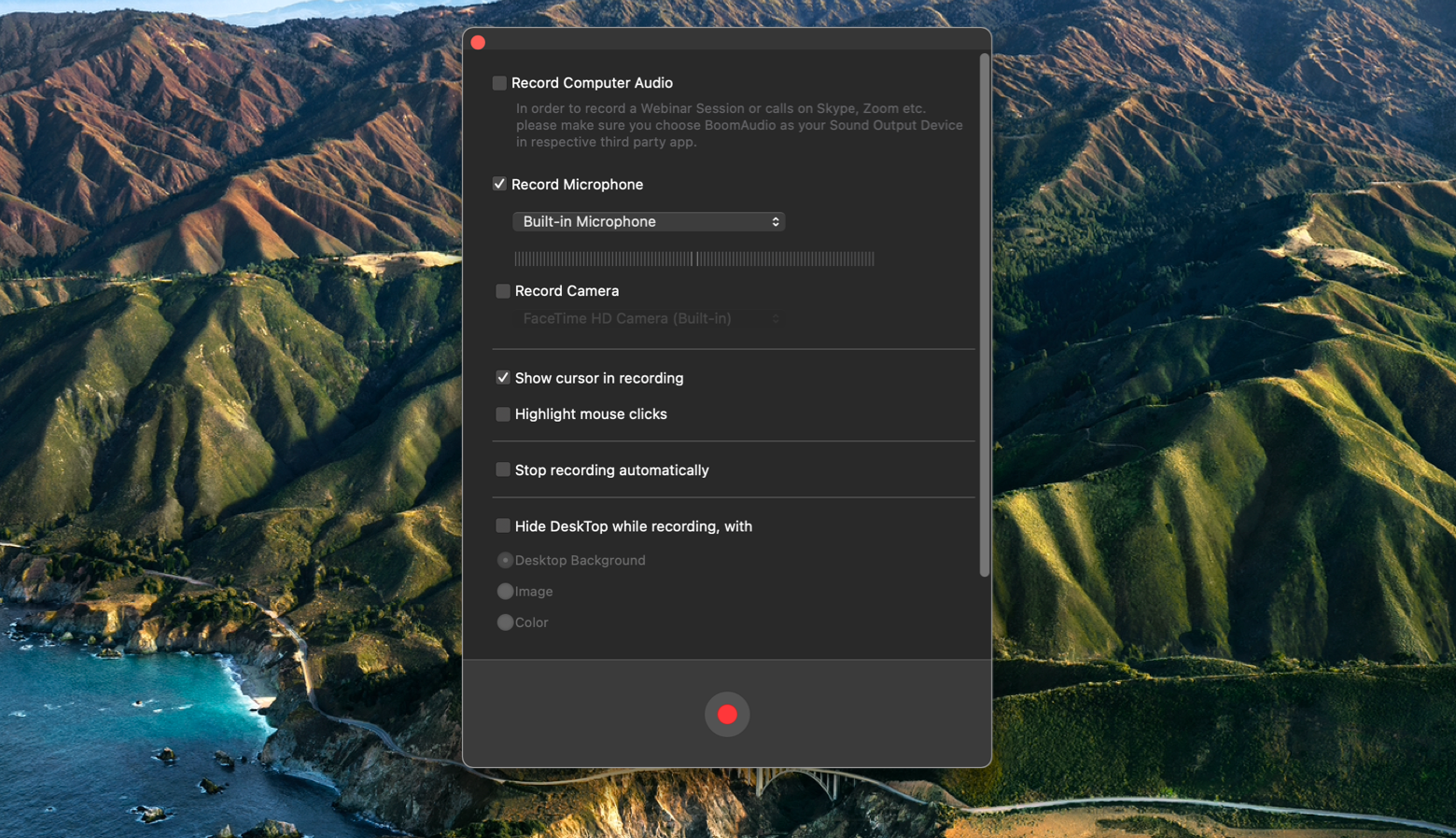 Of course, you can annotate your screen in Capto, but we love that it has a tutorial feature for voiceovers and recording you via your Mac’s FaceTime camera. It’s really quite special.

Even simple recordings are quick and easy. Here’s how to record your screen with Capto:

That’s all it takes! To end the recording, hold down shift and command, then press the escape key.

Edit and improve your video after screen recording

Capto has an editing interface built in, but you may want to take your editing to the next level. Maybe you need your tutorial videos to stand out, or want to adjust color or balance of the recording. With CameraBag Pro, it’s simple!

CameraBag Pro makes editing photos or video really easy. All you have to do is load your video or photo, and select the editing features you want to utilize. Editing options like white balance, contrast, exposure, and saturation appear below the image or video you’re editing in CameraBag Pro. When you want to adjust something, simply select it, then use the slider that’s just below the photo or video. 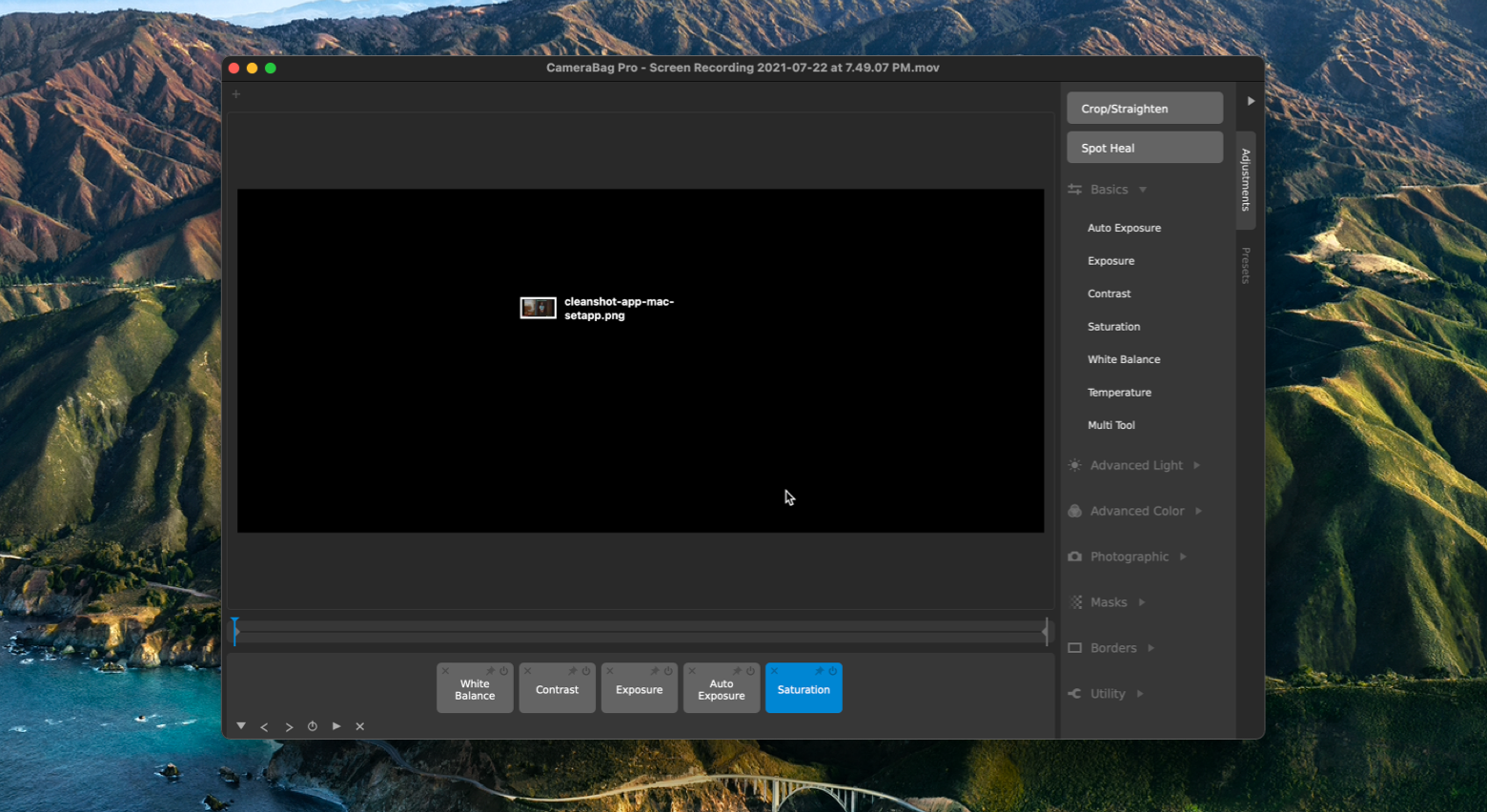 If you no longer want that items to be editable – say you decide the white balance is just fine as-is – just click the ‘x’ ont eh item thumbnail and CameraBag Pro removes it. (Everything is available on the right-side menu, so never worry if you decide to add that to your editing queue later on!)

To edit a video with CameraBag Pro, follow these simple steps:

Capturing your screen isn’t difficult, but getting great results without the right apps can be. The built-in Screenshot app is fine for simple tasks, but the more you record your screen the more frequently you’ll want to take your recordings to another level.

This is why Capto, CleanShot X, and CameraBag Pro are must-have apps on your Mac. Dipping and diving between the Screenshot app and others to do simple things like annotate or edit videos is silly. Capto stands out for tutorials; there’s just no possible way to do what Capto doews natively on your Mac.

These three apps, along with over 200 others, are available for free during a seven day trial of Setapp for Mac. With Setapp, you get unlimited access to a massive catalog of productivity apps for the Mac, all included during your trial period. Mix, match, and curate the absolute best suite of apps for your own workflow!

When your trial of Setapp ends, continued access is only $9.99 per month. It’s an incredible deal, so why wait? Give Setapp a try today.