Superpowers for your iPhone
Tackle your tasks with Setapp app suite solutions.

Apple makes it simple to broadcast the display of an iPhone, iPad, or Mac to any other AirPlay-enabled device in range. However, disabling AirPlay is not always a no-brainer. Fortunately, it only takes a few taps or clicks to do that. In this article, we’ll show you how to turn off AirPlay on iPhone, iPad, Mac, and Apple TV.

How does AirPlay work?

Before you find out how to turn AirPlay off, let us quickly explain what AirPlay is and how it works. If you know the basics, go down to the next paragraph.

In short, AirPlay is an Apple-made wireless technology that lets compatible devices on the same network stream content wirelessly to each other. These devices could be your MacBook streaming a document to an AirPlay-compatible printer, your iPhone streaming music to wireless speakers in your home, or your desktop Mac streaming an HD movie to your TV.

Get a set of tools to duplicate your screen effortlessly, control settings across multiple monitors, quickly remove big old movies from your device, and much more.

How to turn off AirPlay on an iPhone or iPad

You might wonder, “Where is AirPlay on my iPhone, and how do I turn it off?” The procedures are different for music and screen mirroring. We’ll show you what to do in each case.

Turn off audio streaming on iPhone and iPad

If you’re streaming music from your iPhone or iPad, it’s easy to turn AirPlay off through the Control Center. Here’s how: 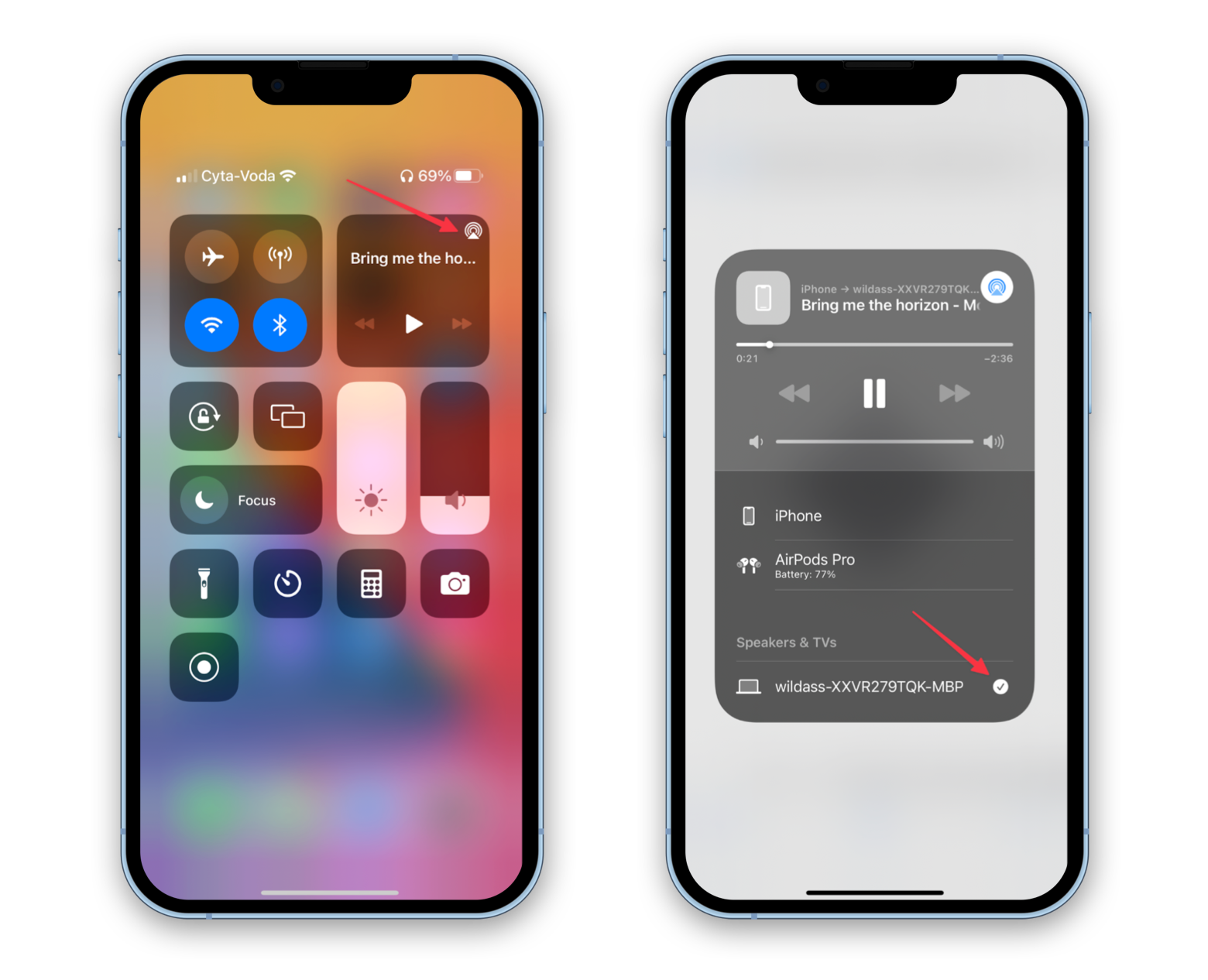 Turn off screen mirroring AirPlay on iPhone and iPad 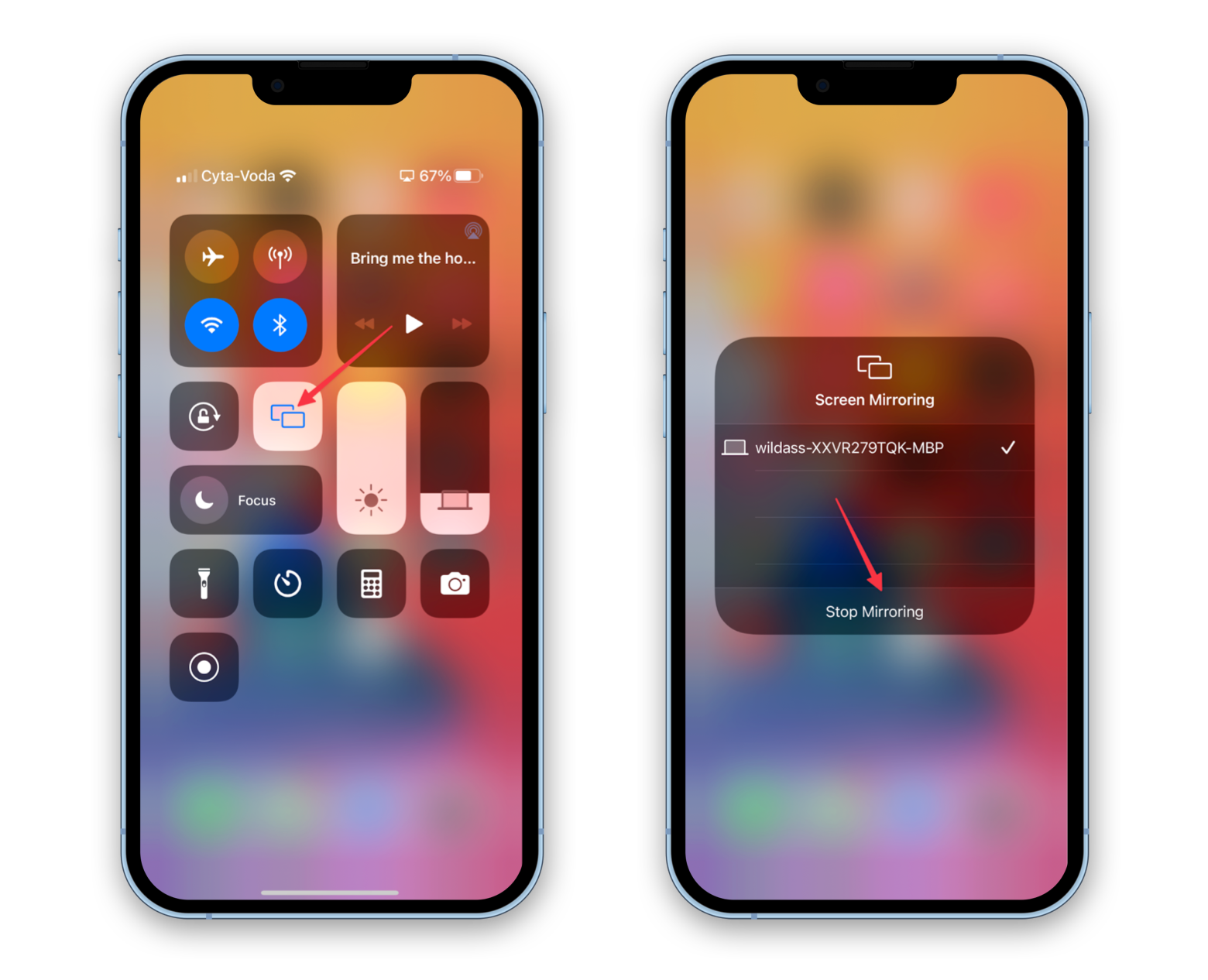 Now you know how to turn off screen sharing on iPhone.

Tip: If you have other devices that don’t support AirPlay, but you want to stream effortlessly, try Replica, a simple app that takes video from your iPad or iPhone and puts it onto your TV using screen mirroring. The app is compatible with streaming devices such as Chromecast, Fire TV, etc.; TVs such as Sony, Samsung, LG, Toshiba, etc.; computers such as Mac, Windows, Linux, etc.; gaming consoles such as Nintendo Switch, PlayStation, Xbox, etc.; and Tesla cars.

On your Mac, you can try JustStream. Unlike Apple’s native AirPlay, which only allows you to connect with Apple TV, the JustStream app practically eliminates restrictions on the type of TV you may mirror Mac content to. 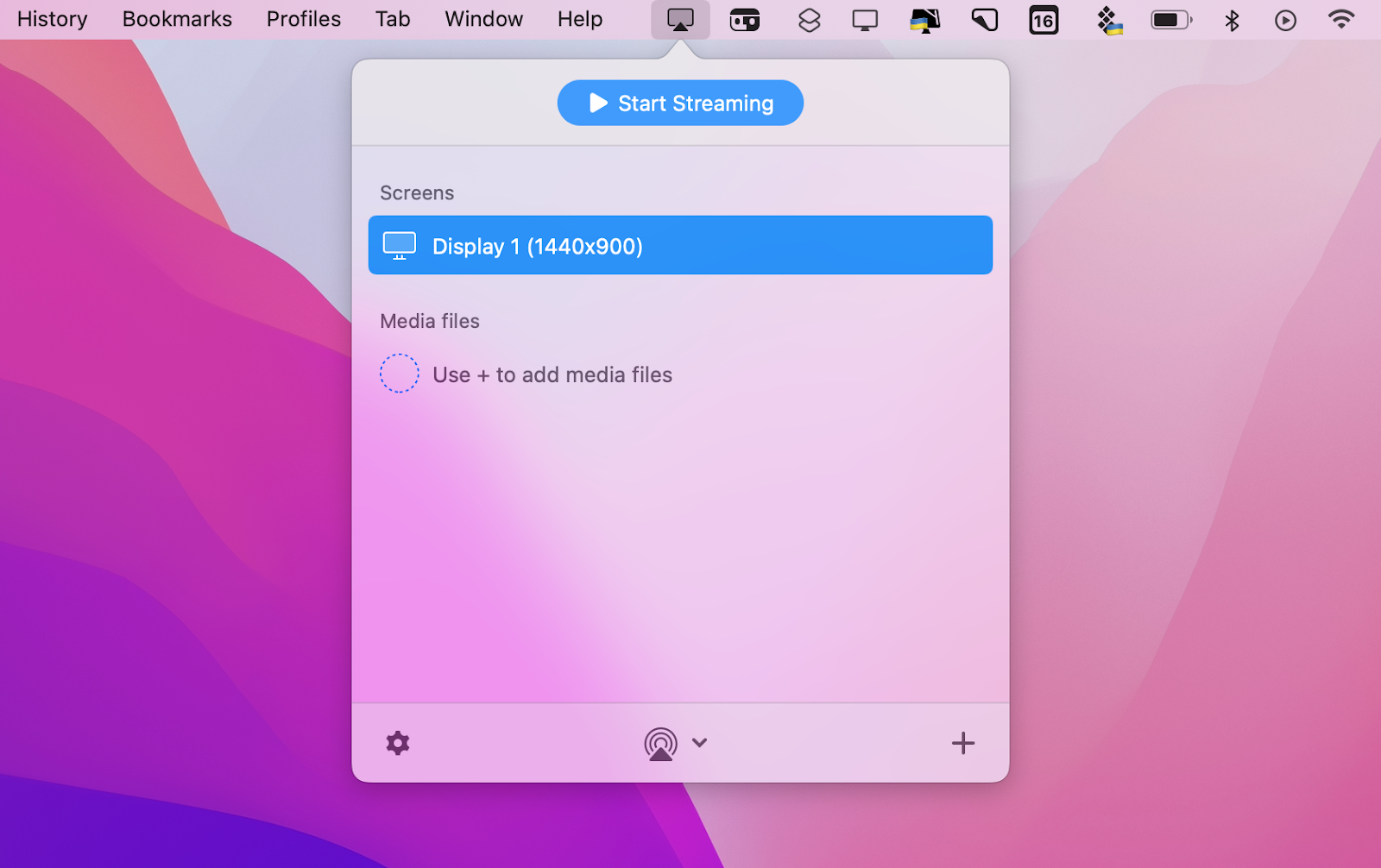 Newer versions of iOS enable iPhones to instantly connect to AirPlay TVs. This is a thoughtful addition. However, we can’t help but feel that some users will find this approach too annoying. It’s not like everyone wants to watch every video they play on their iPhone on the large screen right away. Thankfully, Apple has included an option to disable the auto-connect feature. So let us explain the process to you.

To prevent iPhone or iPad from automatically connecting to AirPlay TVs, follow the steps below:

How to remove AirPlay from lock screen

When an iPhone is connected to another device using AirPlay, a playback control widget appears on the lock screen. Because it is so big, you can accidentally touch it and stop the streaming. Even though Apple didn’t make it easy to turn off the widget, you can do it by following these steps:

How to turn off AirPlay on Mac

If you use AirPlay to send audio or video from your Mac to your Apple TV or to mirror your screen, you might also look for ways of how to stop AirPlay on a Mac.

How to turn off screen mirroring on Mac

In case you use AirPlay to mirror your MacBook screen to another device, such as Apple TV, here’s how you turn screen mirroring AirPlay off: 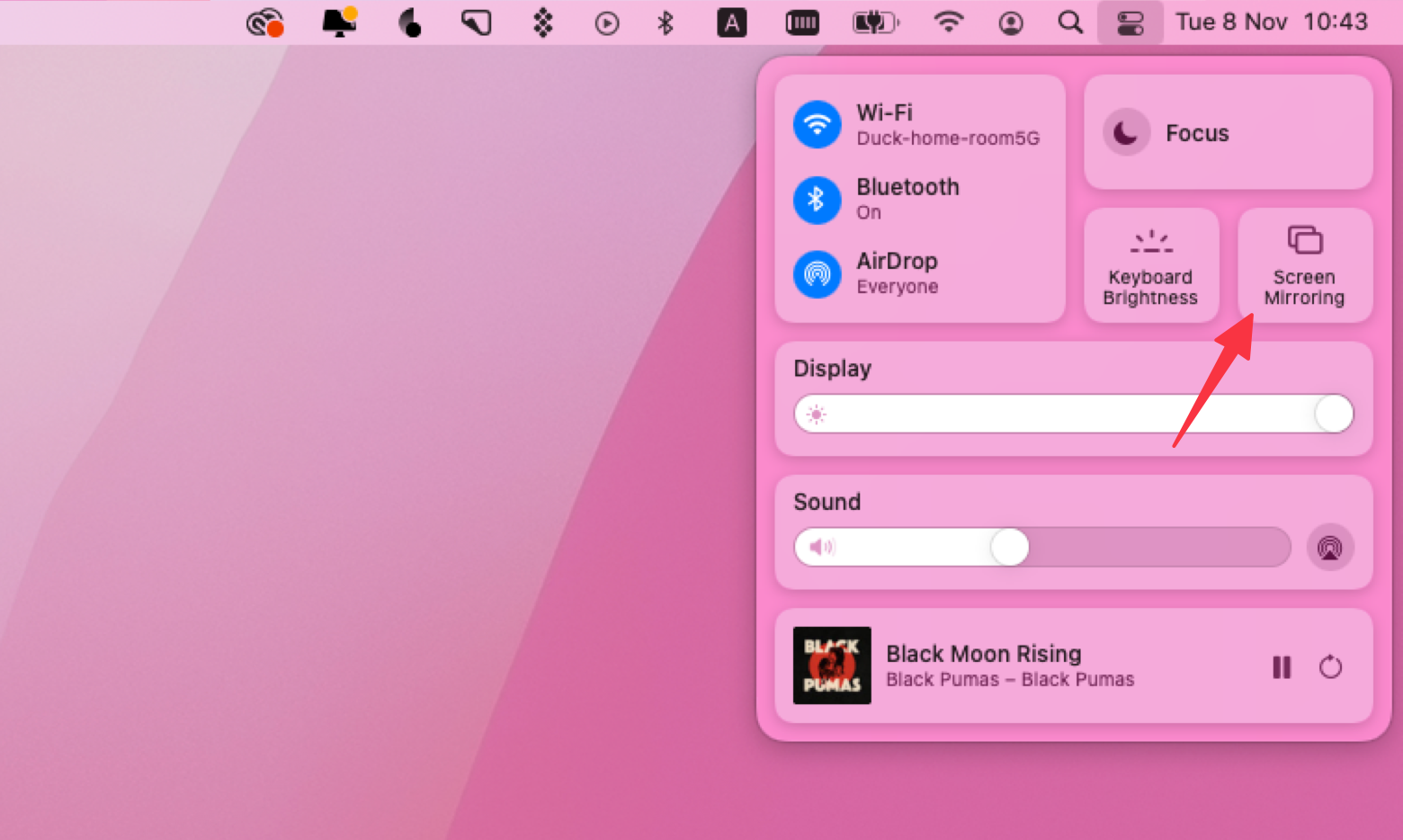 Tip: When you use multiple screens at the same time, it’s convenient to have custom settings for every display’s brightness, color, and volume. DisplayBuddy is a tool that will help you control settings across monitors with ease. This is especially important if your external screen always resets brightness when you switch it off. 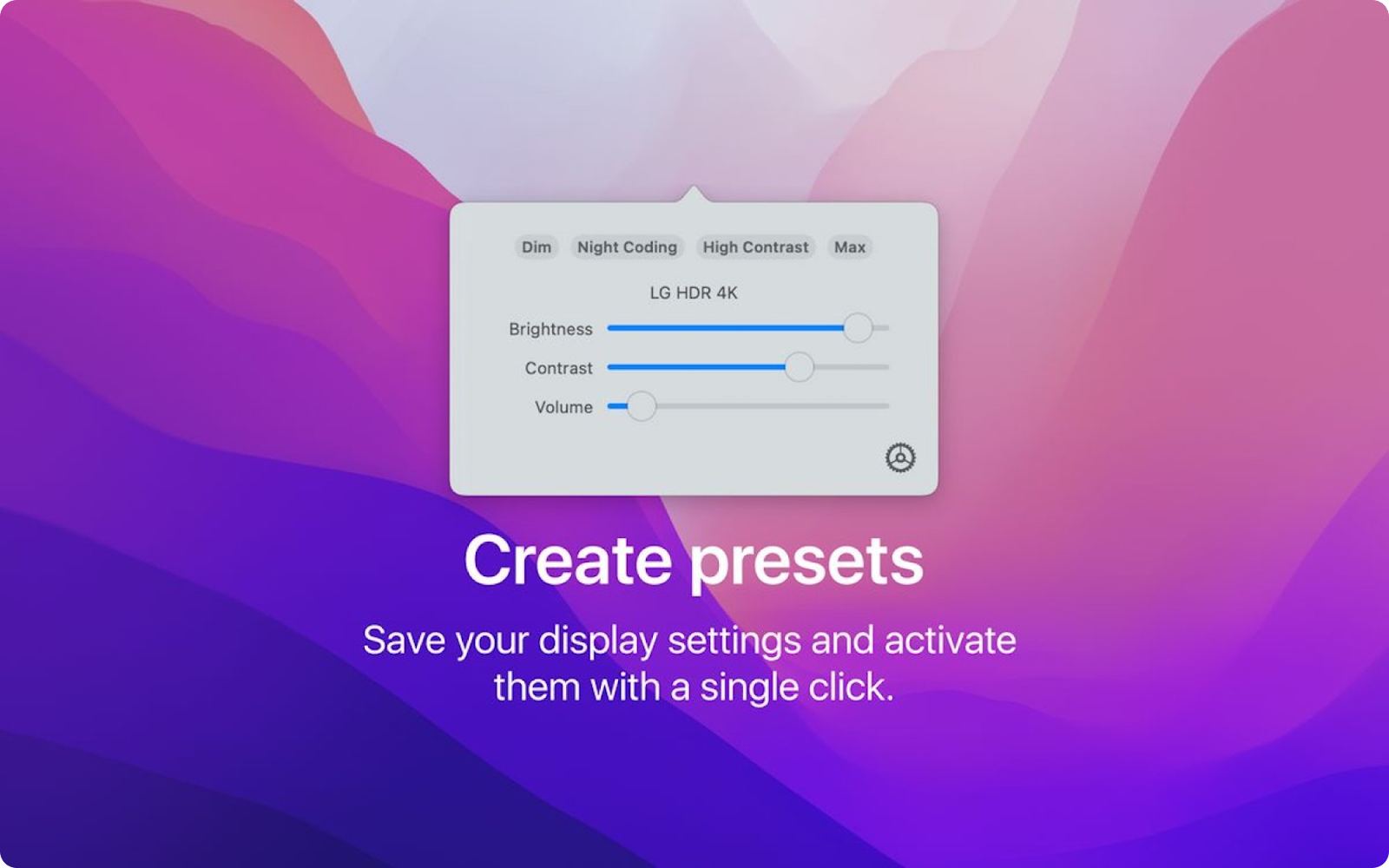 Disconnect AirPlay audio on a Mac

You can do this from the app you’re using or from the Control Center. Let us show you both methods.

Method 1: Open the Music app and tap the AirPlay icon to send songs to another device. To send the music back to your computer, uncheck the box for the device you’re sending the music to and check the box for your Mac’s speakers. 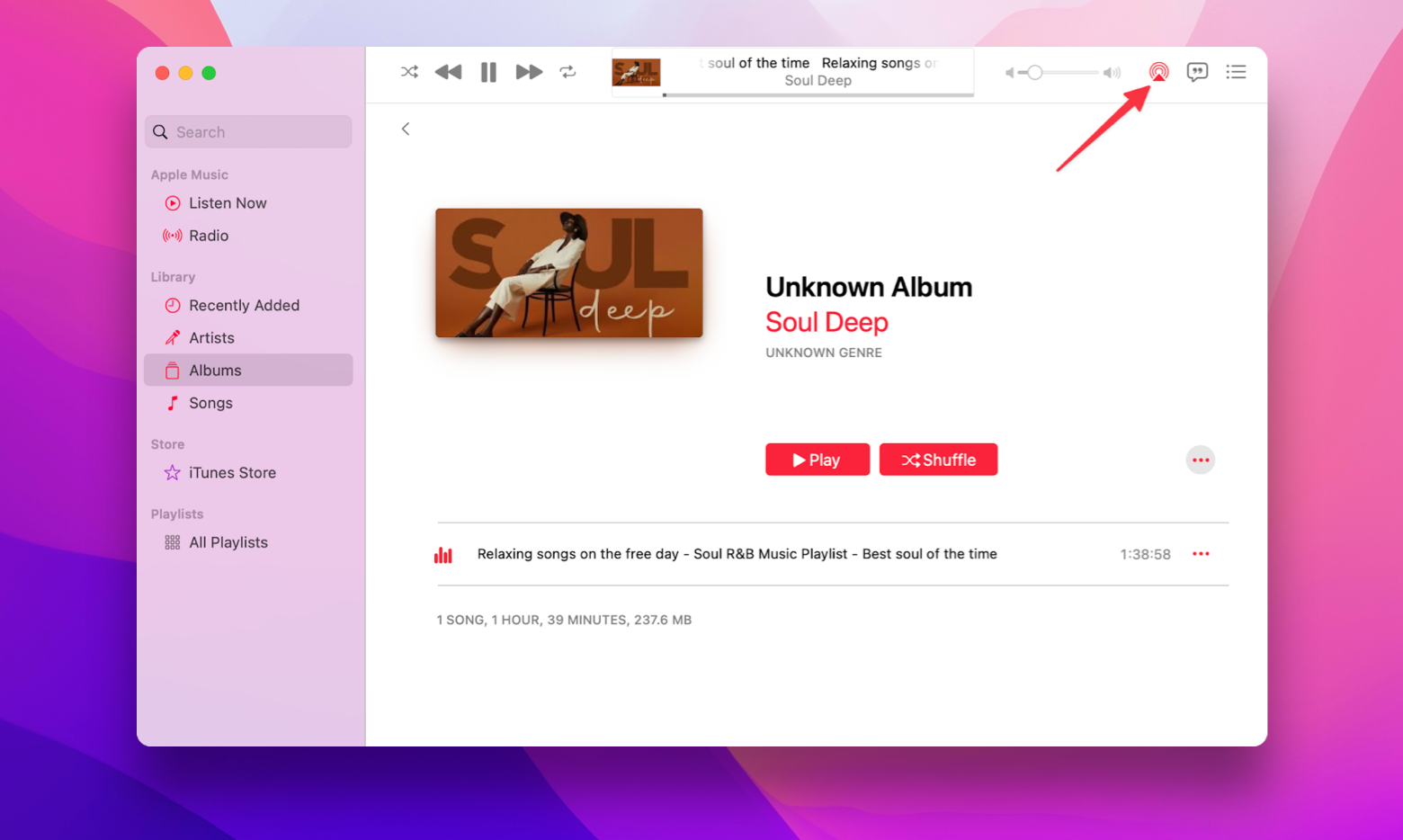 Method 2: If you used the Control Center to start sending music over AirPlay, open it instead. Select the AirPlay button next to Sound that has a checkmark on it. The device you want to send the sound to will be highlighted. Choose the speakers on your Mac to send the sound back to your Mac and turn off AirPlay. 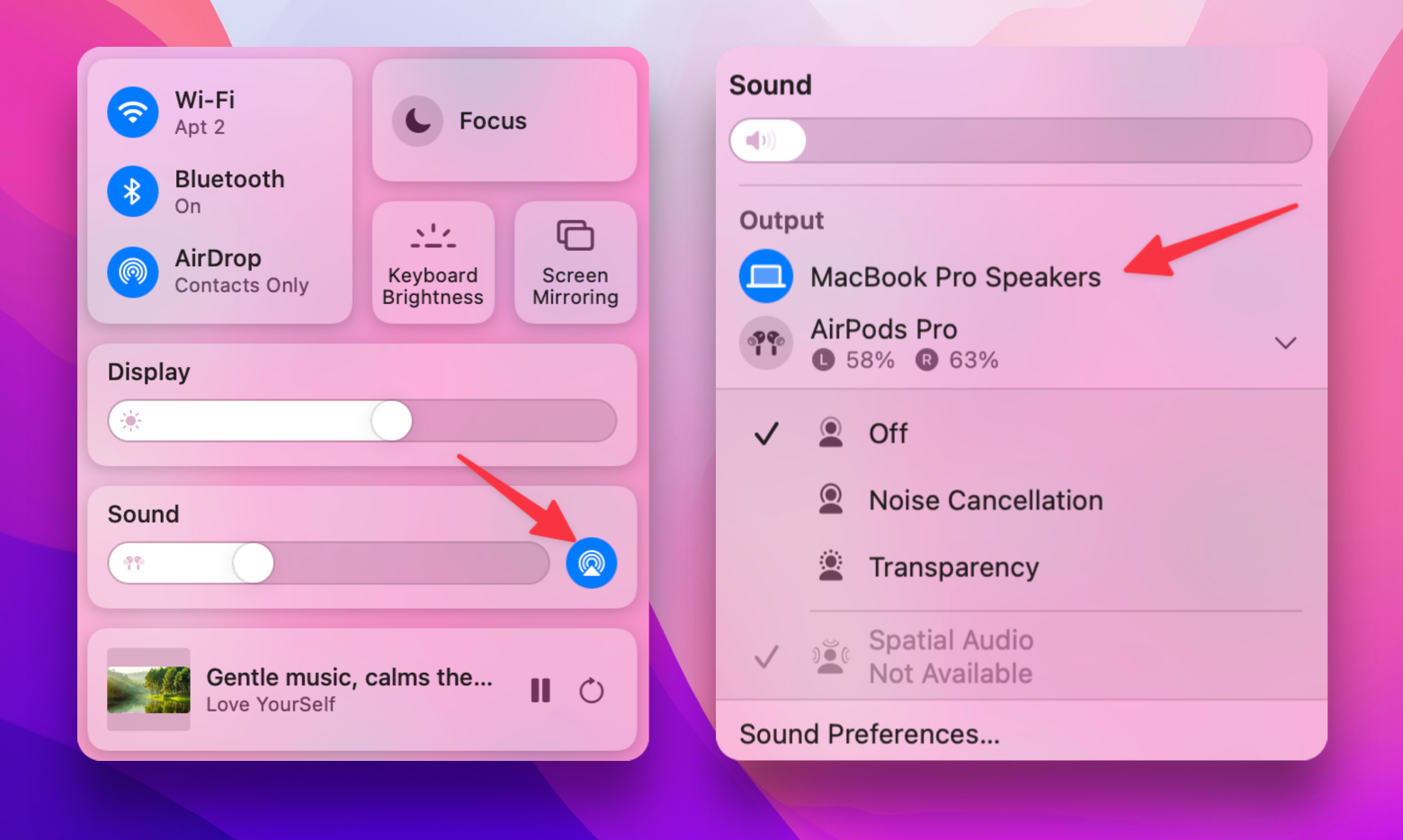 Tip: Use the Bartender app if you want full control over how the menu bar looks and what it does. Make your most important menu bar items always visible, and set the exact order of the items in your menu bar based on how you work. The Bartender app will make sure that you always get what you want.

Disable AirPlay Receiver on a Mac

If you don’t want to allow other devices to use AirPlay to stream content to your Mac, you can disable AirPlay Receiver. Here’s how you can do that: 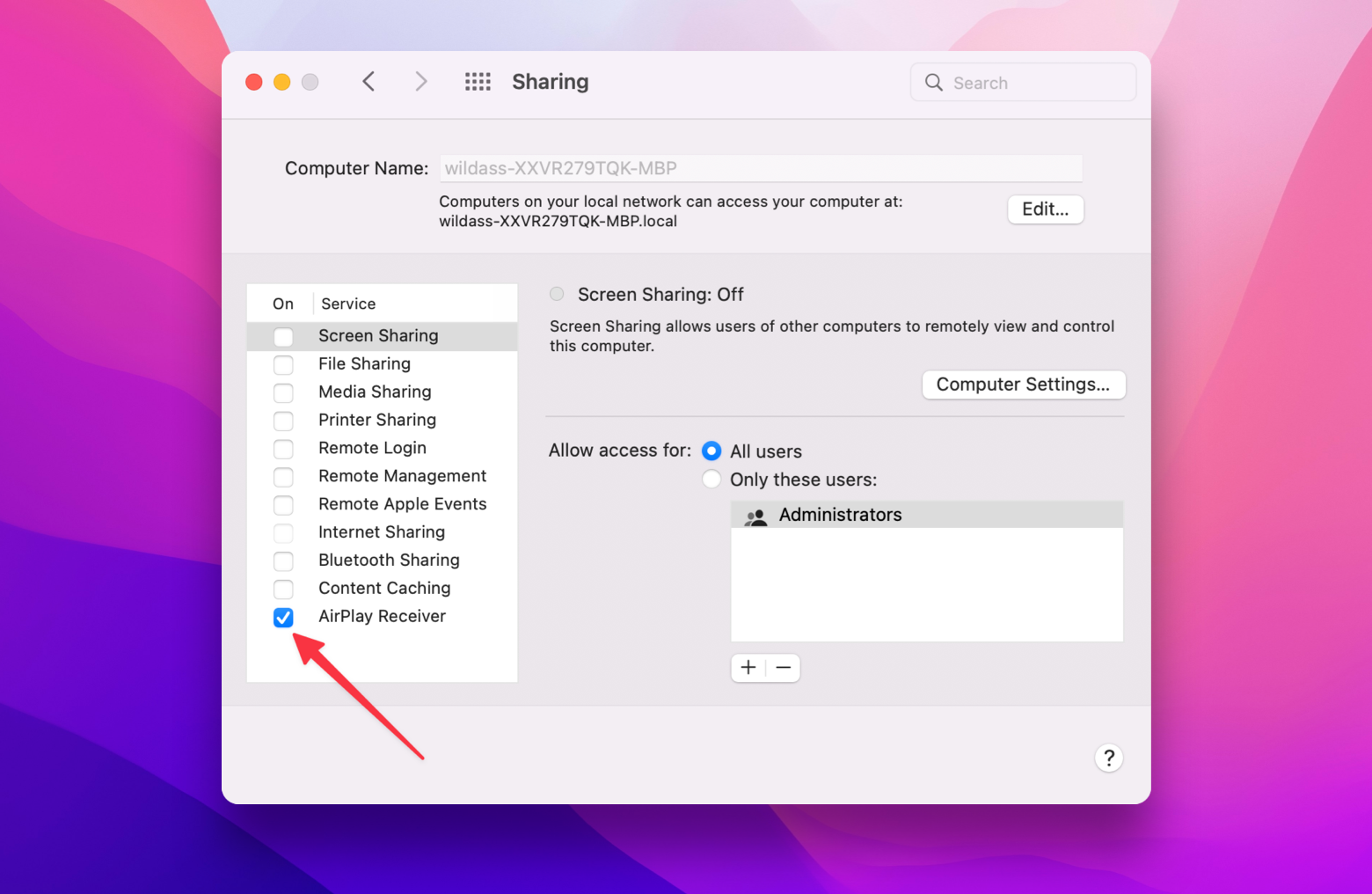 How to turn off AirPlay on Apple TV

You can easily view and disable anything you’re sharing over AirPlay on Apple TV by using the Control Center.

Here’s how to disconnect AirPlay on Apple TV:

Tip: If the videos you want to AirPlay to TV from Mac are on your computer, they probably take up a lot of space. And if you have a lot of videos you won’t watch again or ever, it’s a good idea to get rid of them to free up that disk space. Use the Large & Old Files module that comes with a helpful app called CleanMyMac X to find large video files that you haven’t opened in a long time. 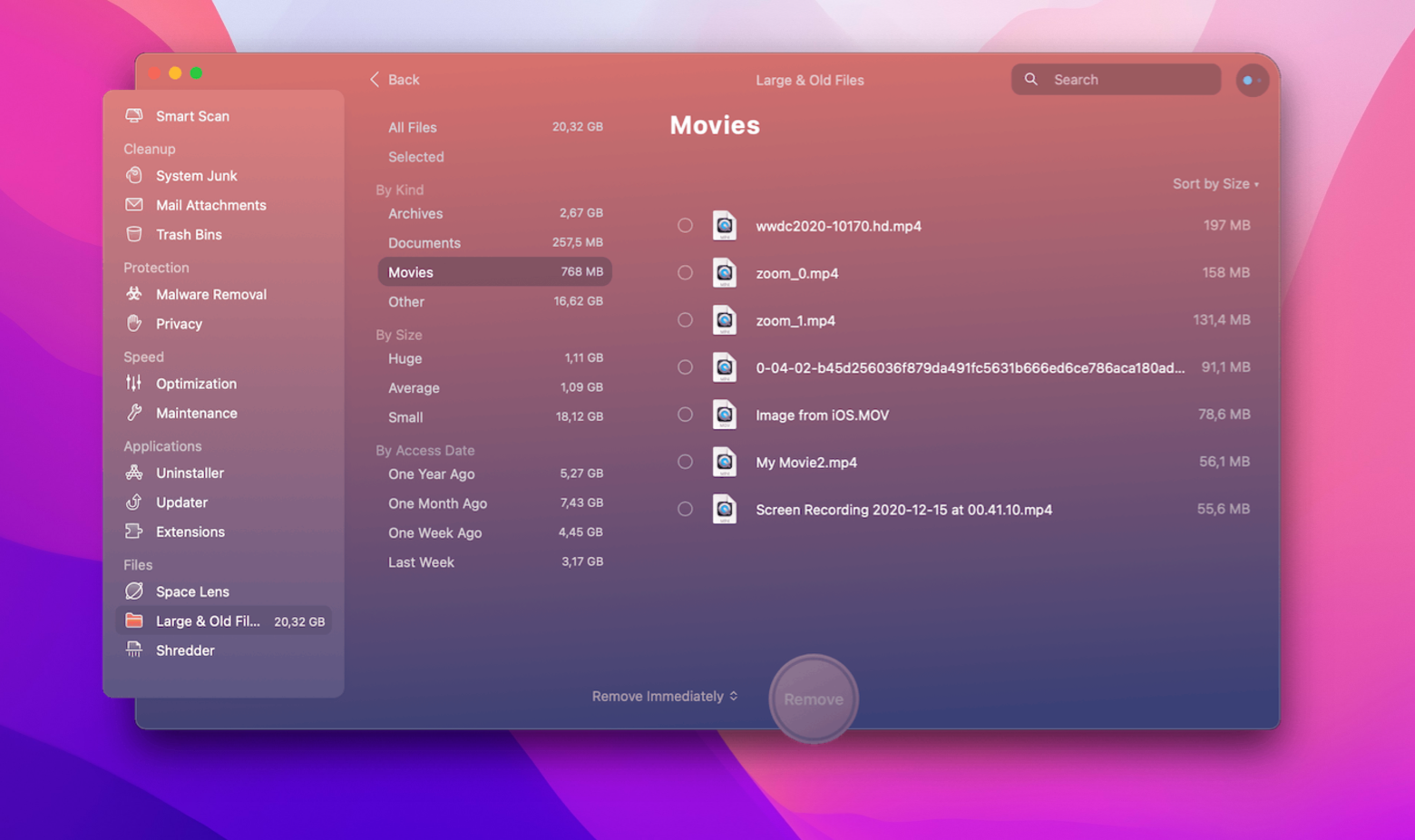 How to improve your streaming experience

Now you know how to turn off AirPlay on iPhone, iPad, MacBook, and Apple TV. As you can see, it’s not difficult to do that.

Next time when you stream content to another device, try the apps we’ve mentioned in this guide. Replica (to duplicate your iPhone screen), JustStream (to mirror Mac screen to TV), DisplayBuddy (to control settings across multiple screens), Bartender (to personalize your menu bar), and CleanMyMac X to quickly get rid of large old movies you don’t need anymore.

All these tools are available via Setapp, a platform where you can find dozens of handy apps for your Mac and iPhone. Try them all for 7 days free. And don’t forget to take a rest next time you work on a big screen.

Finally, here’s a quick FAQ to answer your questions.

Is AirPlay the same as screen mirroring?

Does AirPlay leave a history?

If you steam video from your iPhone to Apple TV, there will be no AirPlay history on your Apple TV. At the same time, if you stream a video from some website using Safari on your iPhone, you should check the Safari history to find the video link.