Get the best writing tool
Write undistracted and edit texts on the fly with Ulysses.

With Clubhouse exploding into a major social media platform, we can’t underestimate the power of voice. Not any more. Maybe that’s a global pandemic thing, but we’re certainly longing for more verbal communication these days. And what if this longing could make us more productive at work? Well, it’s possible with dictation software.

If you’ve never tried dictating text instead of typing it, we encourage you to do it right now and see whether it saves your time (spoiler: it does). And if you’re thinking “nay, dictated text is a mess,” you should see our collection of text editing tools — they will help you polish texts in no time. So why not give it a try?

What is dictation software?

Dictation software uses speech recognition technology to convert spoken words into text. Basically, it’s something that could help Isaac Asimov write 1000 books (and not 500 as he did) in the twentieth century. Thanks to high accuracy and great speed of speech-to-text conversion, dictation software works great for note-taking, writing lengthy texts, even chatting in messengers.

The first solid version of dictation software called Dragon NaturallySpeaking was released in 1997. There have been some attempts to create such programs before but most of them failed or were very inefficient. In fact, before 1997, one had to dictate very slowly, pausing after every word so that software could process it.

Today, voice-driven technology is thriving. Lots of software use voice chats, text-to-speech, and advanced voice assistants. Dictation features have been on the rise, too. For sure, lots of apps and websites you use daily have powerful dictation capabilities. Google Docs, Apple text editors, and, of course, Siri make it easy to turn words into typed text.

Why you need dictation software

The most obvious benefit of choosing dictation over typing is speed. According to Mobius, good dictation software for Mac can process around 150 words per minute, while even the most professional keyboard ninjas can type 80 words per minute max. Not impressed? Here are more ways in which dictation tools can help you:

Ok, Google. Dictation software Macintosh. What are the best tools to try in 2023? We checked a few free and paid apps, and here’s our conclusion: If you’re a Mac user, you don’t need to buy any dictation tools at all. Modern free dictation software for Mac gives you incredible quality, and it’s already there on your computer. You will need some help with editing the text, though, so read on.

Apple Dictation is native free dictation software for Mac and iOS devices, operating under Apple’s broader Voice Control functionality. It works in all native text editors, messengers, and basically any program where it’s possible to type. Here’s how to enable Dictation on Mac: 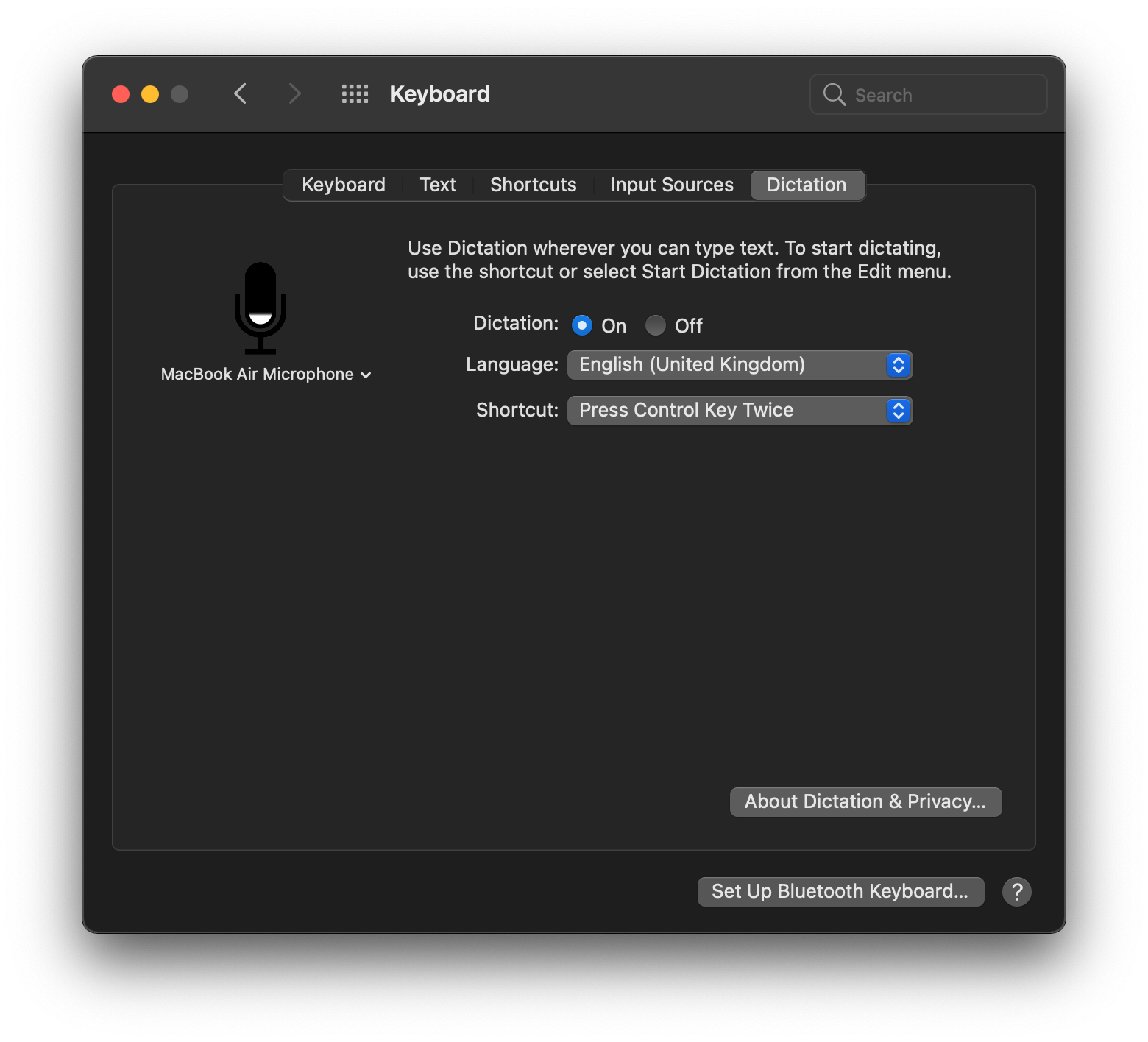 In the same tab, you can enable a handy shortcut for Dictation so that whenever you use this shortcut, you can start dictating right away and your words will be converted into text. The words will appear wherever your cursor is.

If you want to use Apple’s native software for more voice-controlled tasks — like telling your Mac when it should open specific apps — go to Accessibility > Voice Control. This is where you can create your custom voice commands. You can also use the feature to automate text formatting process: for instance, set the rules for when you want to insert a screenshot in your text or start a new paragraph. 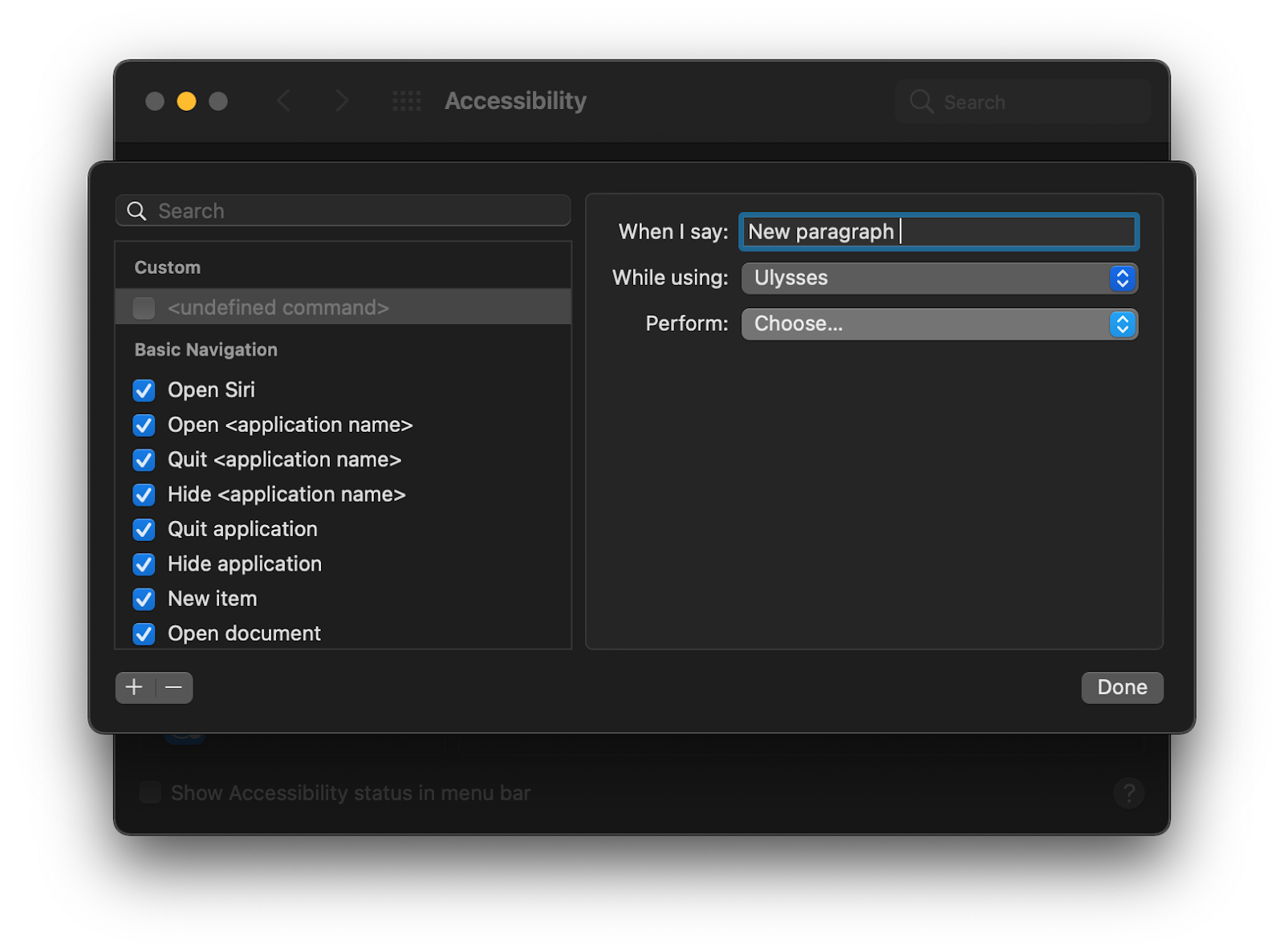 What’s Apple Dictation good for? Voice-based commands, in general. The accuracy is pretty high (according to Zapier research, Apple Dictation gives you 11 inaccurate words on a 200-word test). We recommend Apple Dictation for everyone who wants a cross-platform solution for Apple devices and loves automating workflows with voice commands.

If you need a dictation tool specifically for Google Docs, use Google Doc Voice Typing. The good news is it’s even more accurate than Apple Dictation, the bad news is it only works in Chrome. So if you’re a devoted Safari user — not your thing.

You can enable Google Docs dictation by clicking on Tools > Voice Typing. You’ll see a microphone icon appear on the left of your doc. Click on it and start dictating. 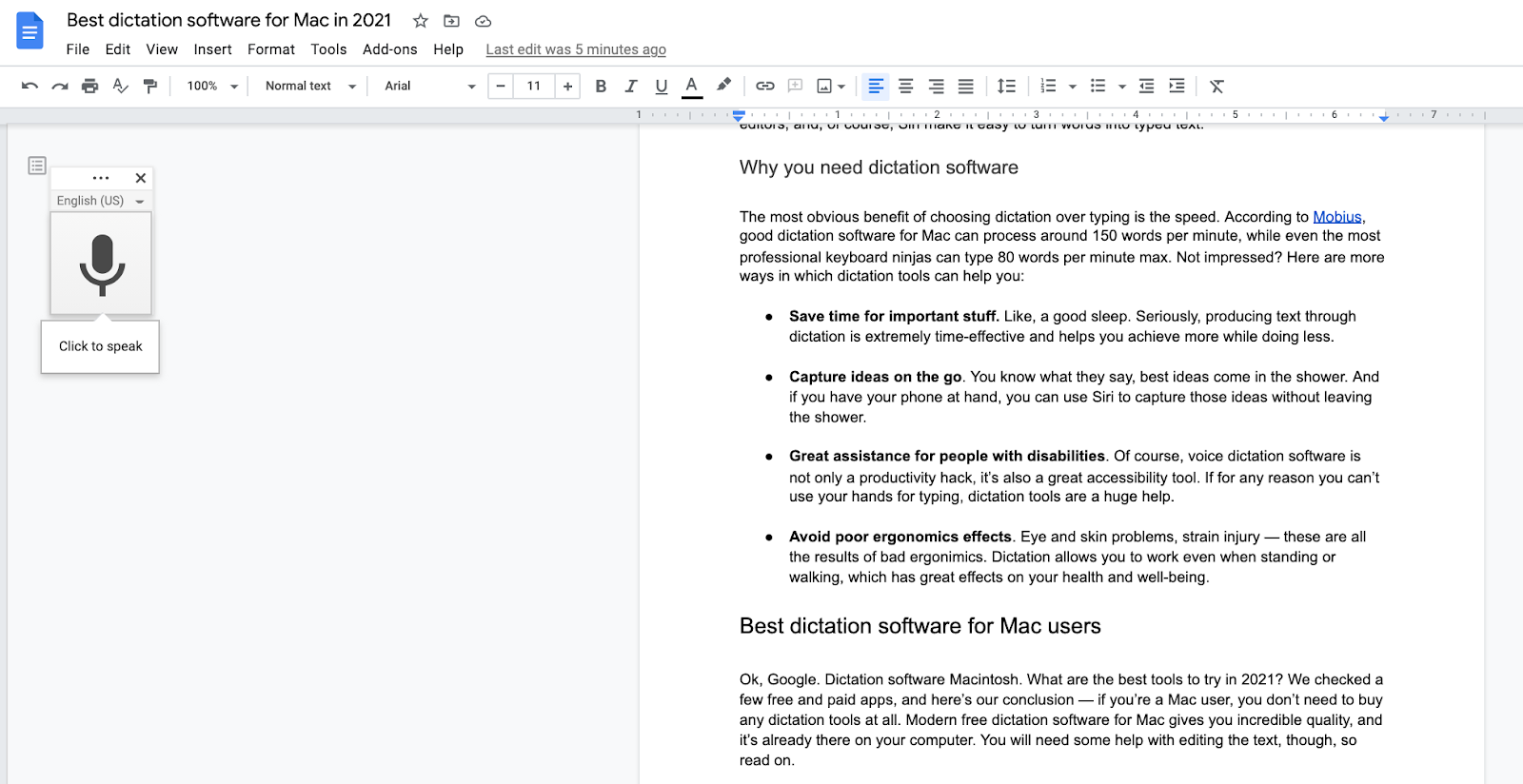 What’s Google Docs voice typing good for? Long-form content, blog posts, rough drafts, etc. If you’re a pro Google Docs user and you do most of your writing in this app (in Chrome), it will certainly save you a lot of time.

Use Siri for dictation

Apple Dictation and Voice Control are tightly connected with Siri. In fact, Voice Control is entirely based on Siri’s speech-recognition engine. For a Mac user, however, converting words into text with Apple Dictation and Siri are two very different processes. While Siri is great for jotting down a quick note or giving an answer to your question, it can’t just instantly press any button.

However, the magic happens when you connect Voice Control and Siri. Here’s a simple example: Go to Accessibility > Voice Control > Commands. Press the Plus button and set up your shortcut:

This is a great way to automate workflows across all your apps, no matter what voice dictation software you use. 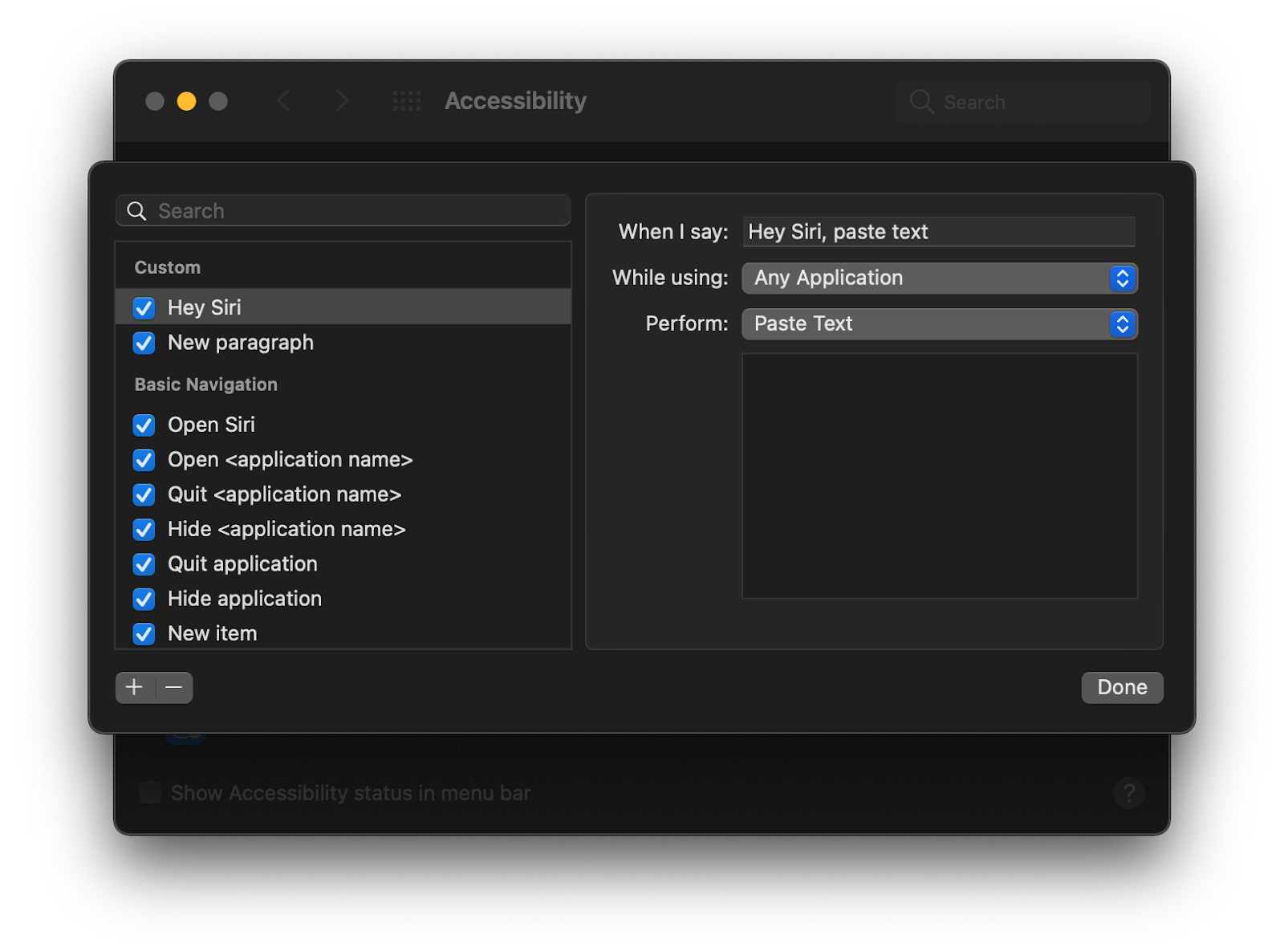 To set up Siri on Mac, go to System Preferences > Siri > Enable Ask Siri. You can customize the Siri shortcut, language, and other settings here, too. 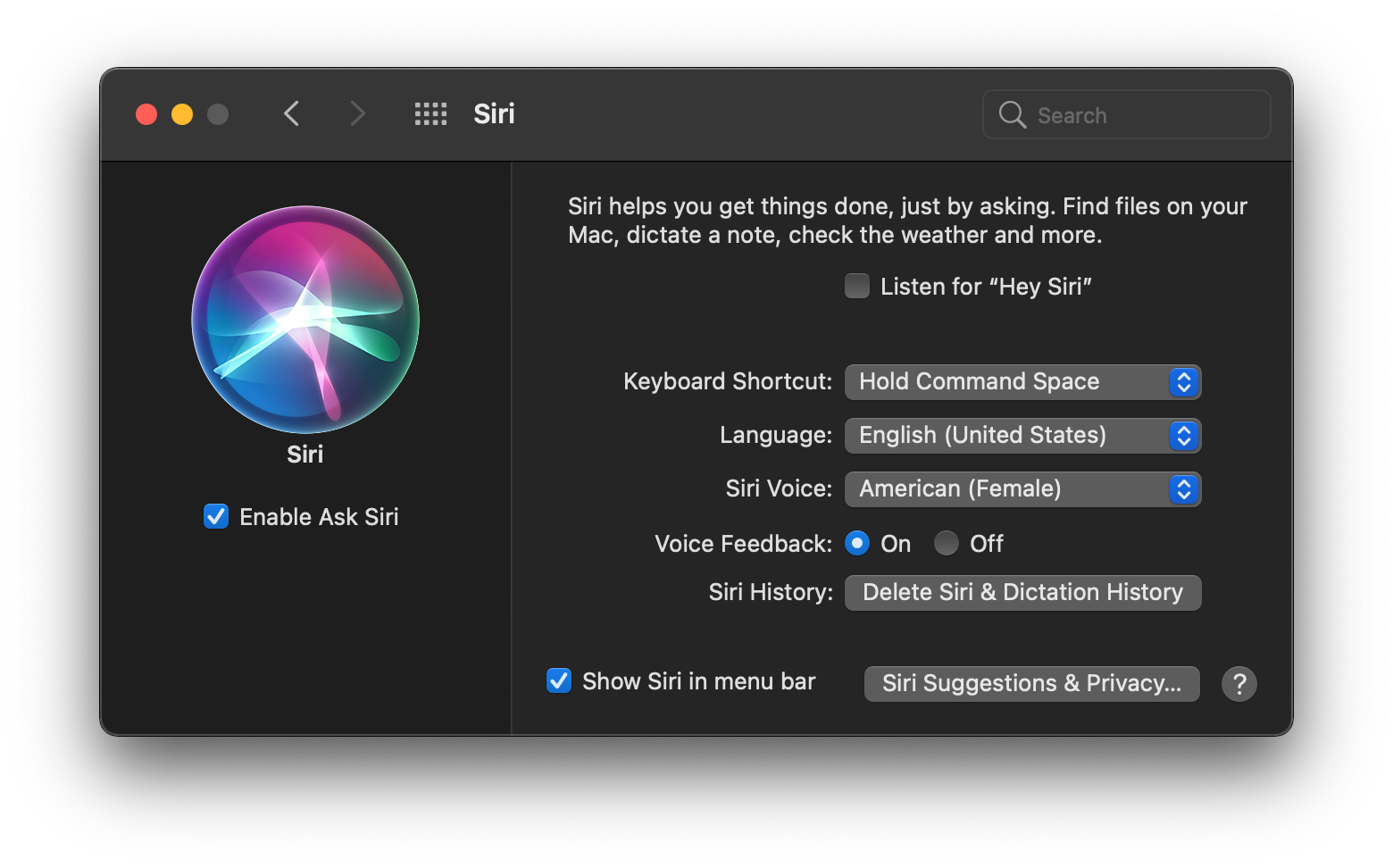 What’s Siri dictation good for? Quick voice commands or cases in which you need an answer to a question (Siri can “google” it for you). You can also use it alongside Apple dictation functionality to set up your own voice shortcuts and automate workflows.

Some people would never google “voice dictation software Mac” because they think it’s easier to type than edit dictated text in the end. Well, that’s where they are wrong. Modern dictation software for Mac lets you edit on the fly. And even if you don’t want to perform editing commands while speaking, there are awesome tools that can polish the text for you in a click.

Format and auto-correct with Ulysses

Ulysses is one of the best markup-based writing apps for Mac users. It has your entire flow covered — from distraction-free writing to editing to organizing to sharing. If you need to quickly fix mistakes in your text, you can just throw it in and click on “Check text” in the right sidebar. Ulysses will show all the punctuation and grammar mistakes, and even fix vocabulary problems and redundancy.

To format your text, select Markup in the main menu. You’ll see lots of options like adding headings, ordered lists, annotation, code, and so on. This will help quickly bring your text into a great shape. By the way, Ulysses comes with a native dictation feature. So you can dictate and save your text right in Ulysses. Then, quickly edit it and share anywhere — Ulysses has some great export options.

The great thing is if you have a Setapp subscription, you get immediate access to Ulysses for macOS and iOS (it saves you a lot of money because Ulysses subscription alone costs $5.99/month and Setapp gives you Ulysses + over 200 apps for $9.99/month).

Plus, Setapp has 10+ other writing apps you can choose from — just in case you don’t like Ulysses. They are all part of your subscription so you can explore indefinitely. TextSoap, for instance, is an app with 100+ text cleanup features. And Strike has auto correct, spell checker, and other tools for custom text transformations. 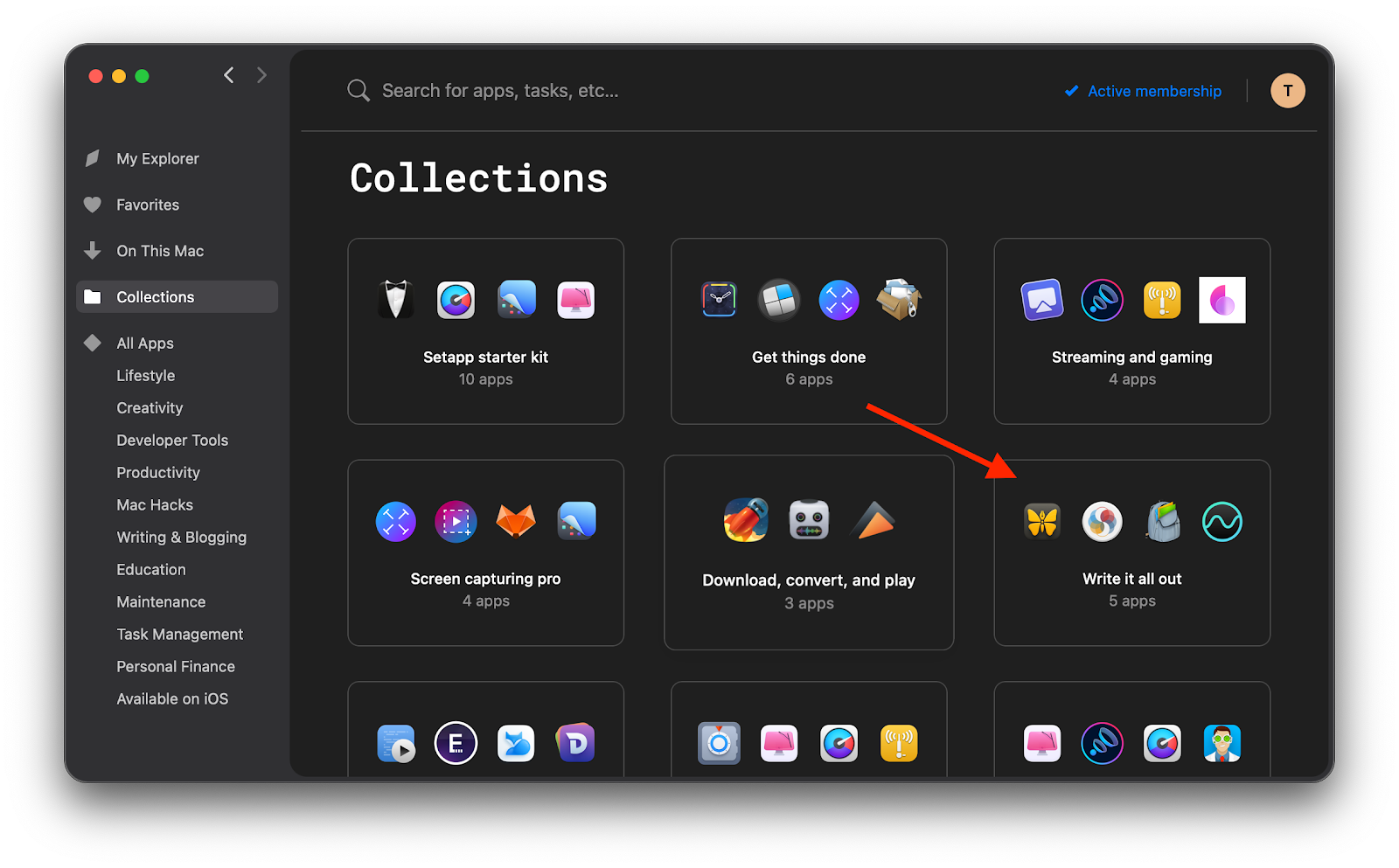 Don’t have time to figure out what apps you need? Setapp has a curated collection for your writing goals — just download Setapp (it offers a 7-day free trial), open the app on Mac > Collections > Write it all out > Install all. Enhance best dictation software with solid text editing tools, and you’ll see your writing accelerate.