Get a pack of apps to fix every Monterey issue.

Apple’s macOS 12 Monterey public beta is finally here, and out team mutually agreed on its awesomeness. Except one designer who upgraded only to try Universal Control and found out it’s not there yet. To avoid such unpleasant revelations, let’s look at Monterey problems.

We explain how to solve macOS Monterey downloading/installing/not booting problems, as well as how to deal with Mac misbehavior after the upgrade.

If you’ve landed here, we assume you’ve already installed Monterey. If not and you’re here to learn about the potential issues — great for you! Here’s a detailed guide on how to install macOS Monterey.

Now, let’s dive into all macOS Monterey issues I personally experienced after upgrading. Plus the collective wisdom of MacRumors, Apple forum, and Google itself — we’ve looked for reports related to the early issues literally everywhere. So here’s what we know.

To get the new macOS on your Mac, you should download it from About This Mac > Software Update. If it’s a beta, enroll your Mac in the beta program first: go to Apple Beta Software Program page > enter your Apple ID > Enroll Your Devices > macOS > download and run the installer. 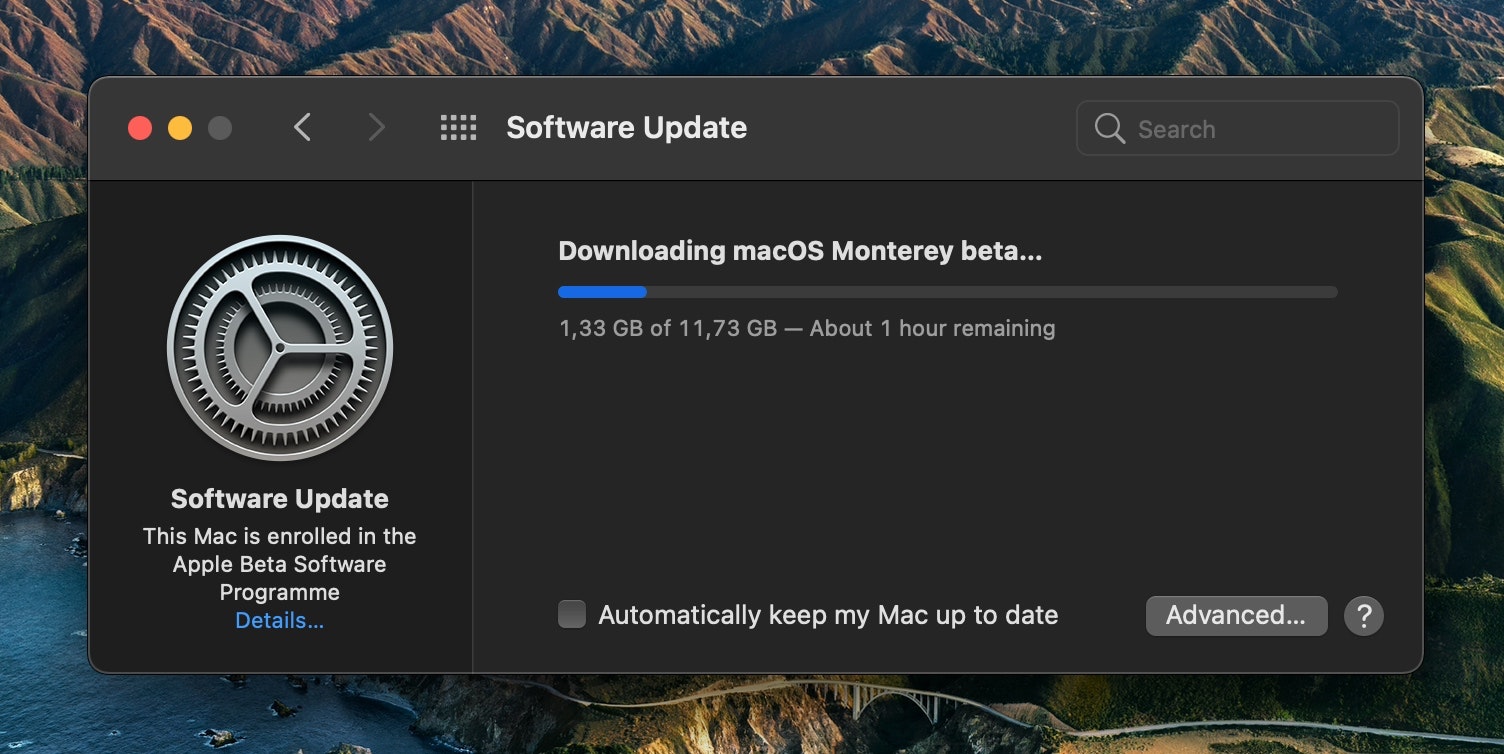 The very first blocker you might experience is macOS Monterey downloading problems. When trying to download Monterey from Software Update, you could see an error that reads “Installation could not continue” or something like that. A few possible solutions:

macOS Monterey leaves a few older Mac models behind, so the chances are it simply won’t work on your Mac. Here’s a full list of Macs compatible with macOS 12:

Network connection is crucial when installing software updates. If your Wi-Fi is poor, installation errors could occur. To find out if it’s the case, you need WiFi Explorer. Just open the app and click on your network connection to check signal strength and noise level. If you have a few network spots available, WiFi Explorer will tell you which one is best to connect to. 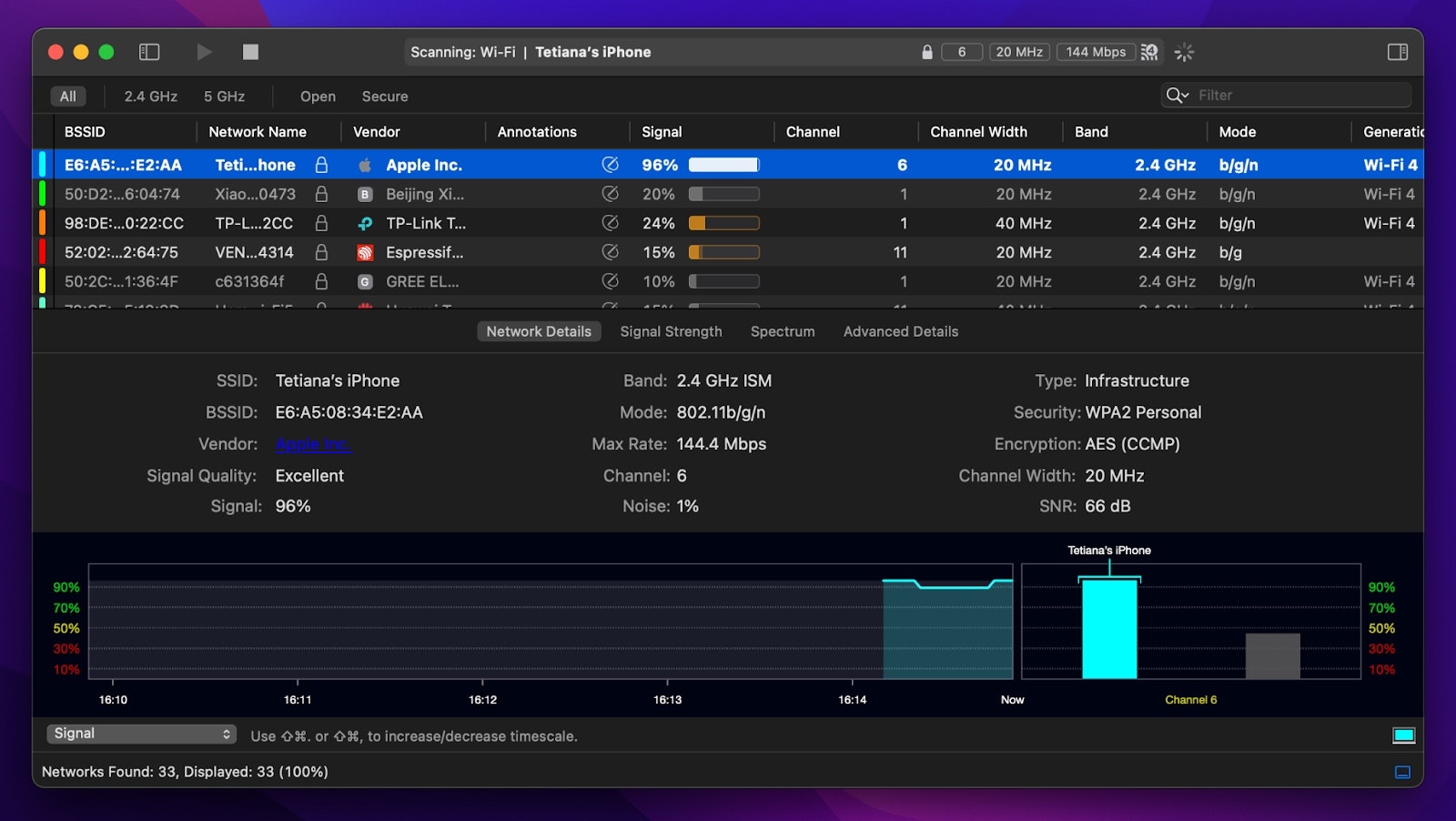 According to early reports, macOS Monterey takes around 20GB of space to download and install successfully. If you don’t have that amount of storage on your drive, go ahead and delete some clutter from your Mac.

CleanMyMac X is the quickest and most reliable tool to free up storage on Mac. Run a Smart Scan to identify any system clutter, duplicates, old caches — all the stuff that should be deleted. Then remove it in a click. From experience, CleanMyMac X frees up around 10GB of space every month for me. And if you haven’t cleaned up for a while, you’ll get even more. 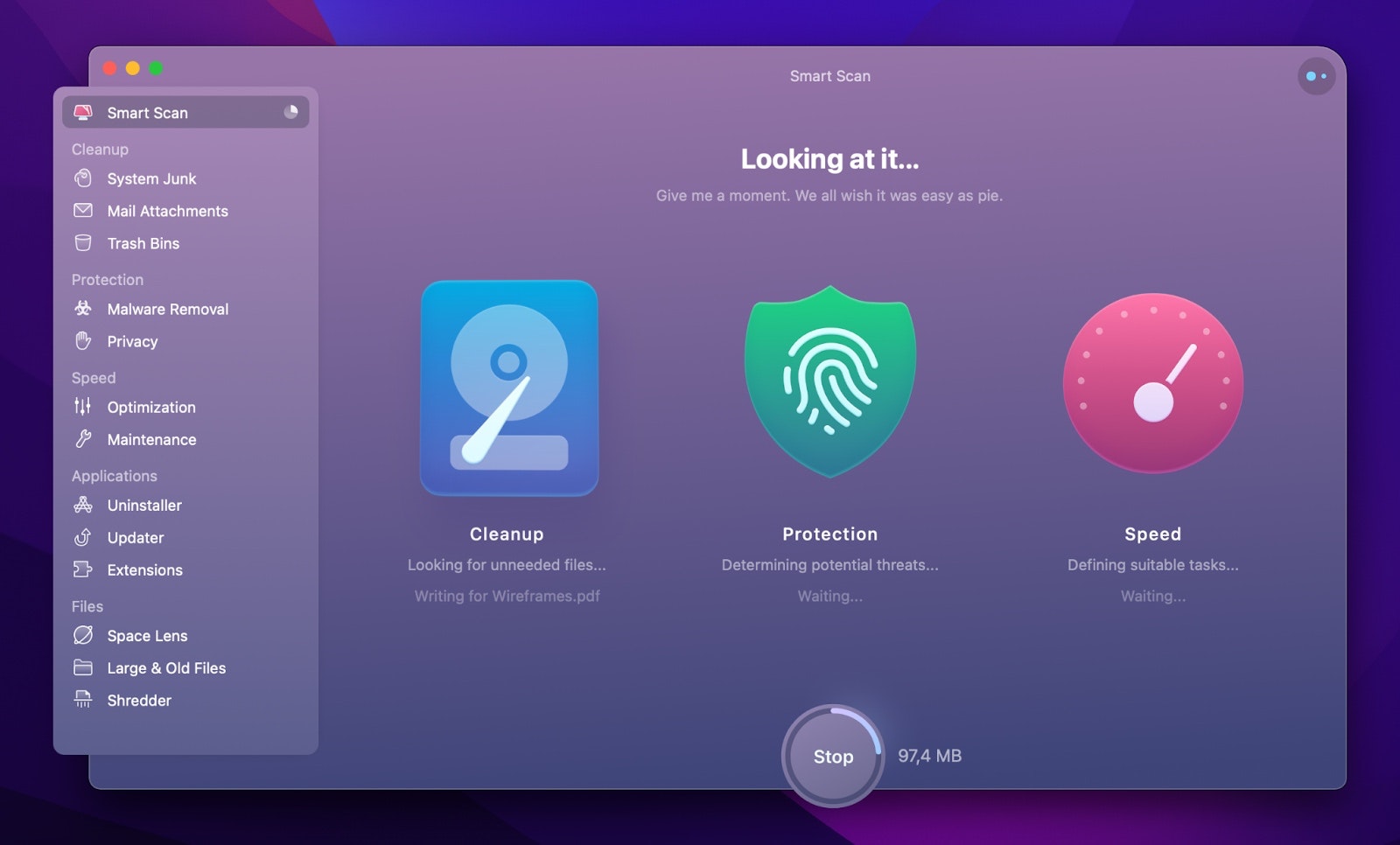 Maybe you’ve got through the download process but can’t move any further because macOS 12 won’t install. Bummer. Usually, some kind of compatibility or verification issue is at fault. 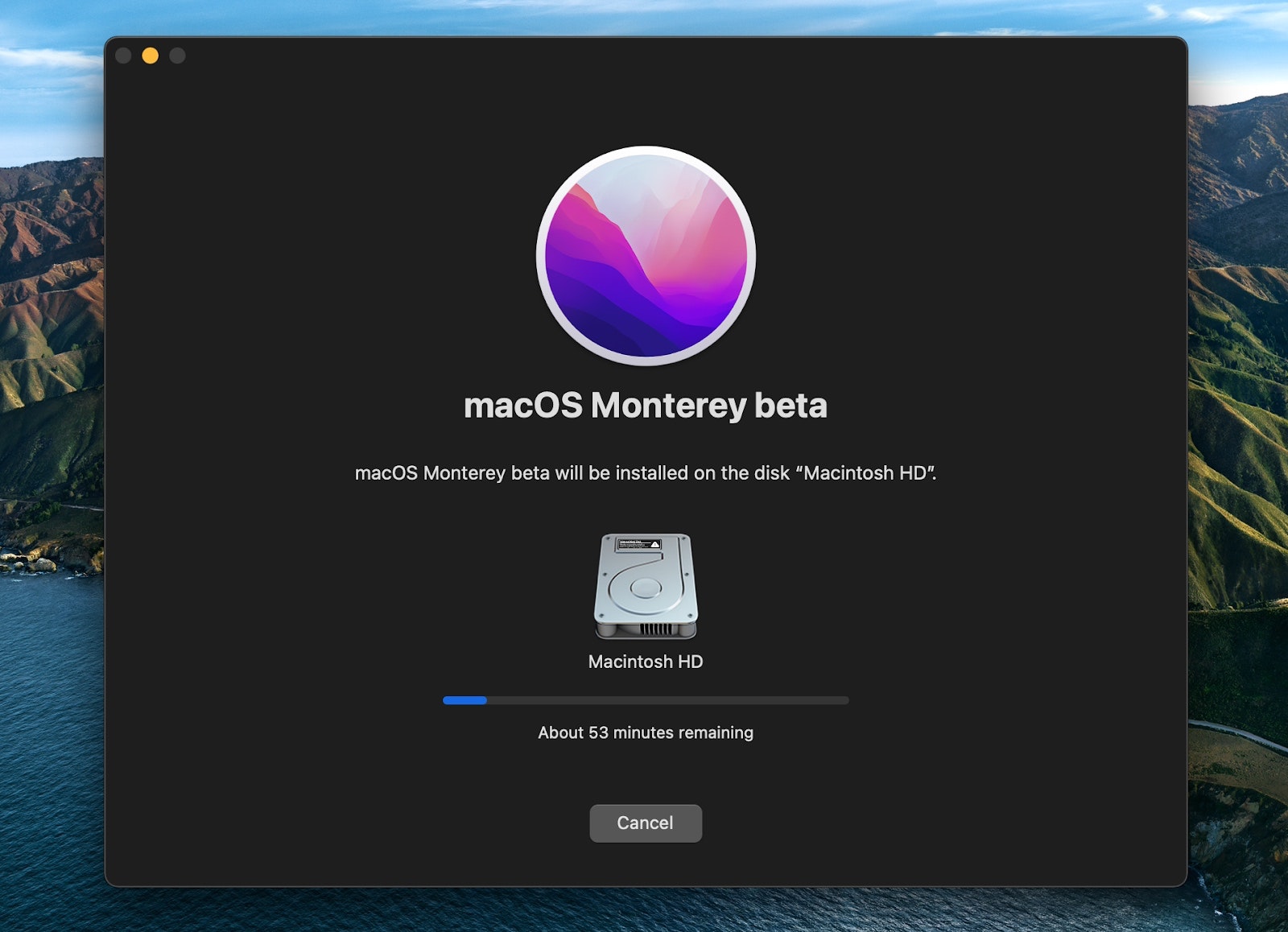 Here are a few fixes for macOS Monterey installing problems. We suggest you try them one by one, in the same order as presented below:

With macOS Monterey, Apple added the opportunity to stream from Mac to Mac (or any iOS device to Mac) via AirPlay 2, an improved version of the native content streaming tool. As we all rushed into trying it out, many people reported problems. AirPlay freezing, working painfully slow, or not working at all. We don’t know the reason, but we know a few fixes you could try. 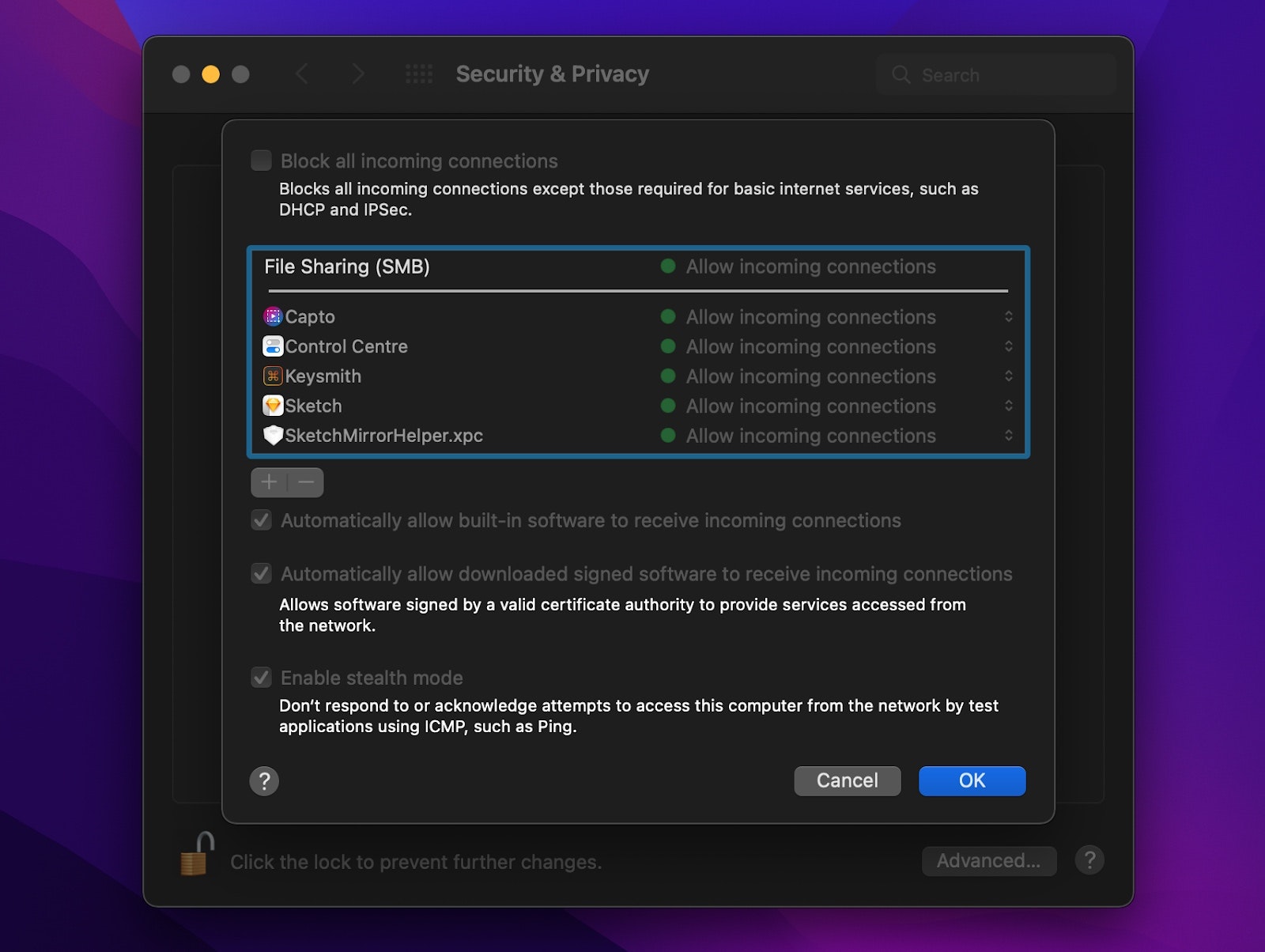 Please note that resetting NVRAM also resets many settings, including display resolution and volume. So you might want to tweak them after restarting your Mac.

If the problem only arises when you try to stream to Apple TV, the first thing to do is to bring your Mac closer to Apple TV. Doesn’t work? Make sure they are both connected to the same network. Maybe one of the devices accidentally connected to another Wi-Fi spot, and so now you’re stuck because of this trivial issue.

Once you’ve fixed network and proximity but the problem persists, try updating Apple TV. Go to the Apple TV Settings > System > Software Updates > Update Software. If there’s an update available, download and install it. Then, try reconnecting via AirPlay.

The universal fix is to use Beamer instead of AirPlay. This great app lets you stream any video to Apple TV (and any other TV device with Google Cast). Remote control, subtitles, playlists, you get all the ordinary perks. Unlike other streaming apps, Beamer natively streams content instead of mirroring screen, so you can expect the best quality. 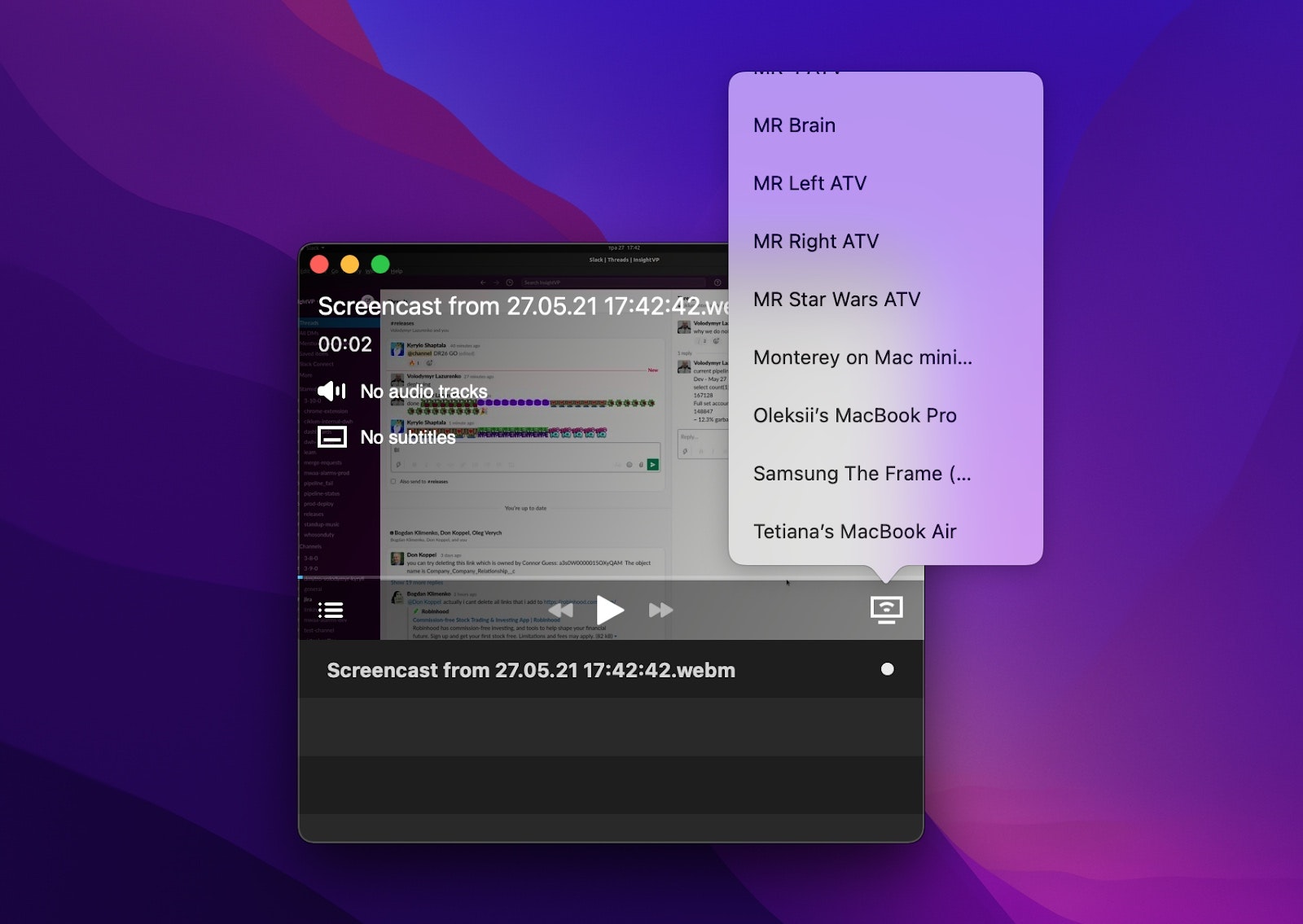 Noticed you can’t work in the park as long as before? Maybe that’s Monterey putting pressure on your battery. Here we suggest the best tips to extend battery life:

iStat Menus is an app that controls your Mac’s overall performance. It offers different modules for monitoring CPU, sensors, battery, and more. We recommend installing all because they all help keep your Mac in good shape. But most importantly, battery. It will let you see which apps use significant energy, track battery’s health, how fast it drains, and so on. 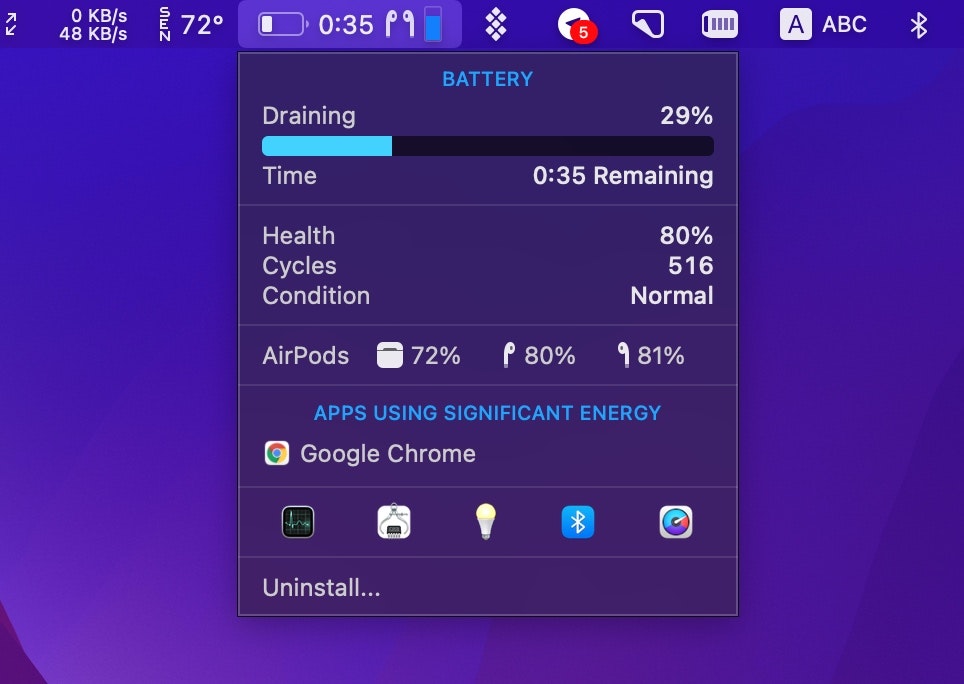 Upon checking the insights, you can make decisions as to uninstalling specific apps or quitting some processes to make your battery life better.

Since it’s a new macOS we’re talking about, chances are some apps haven’t been optimized for it yet. Or, some of them need to be updated to work properly. Anything that relates to app performance could affect your battery life. CleanMyMac X has two great tools — Updater and Uninstaller that can solve these problems instantly. 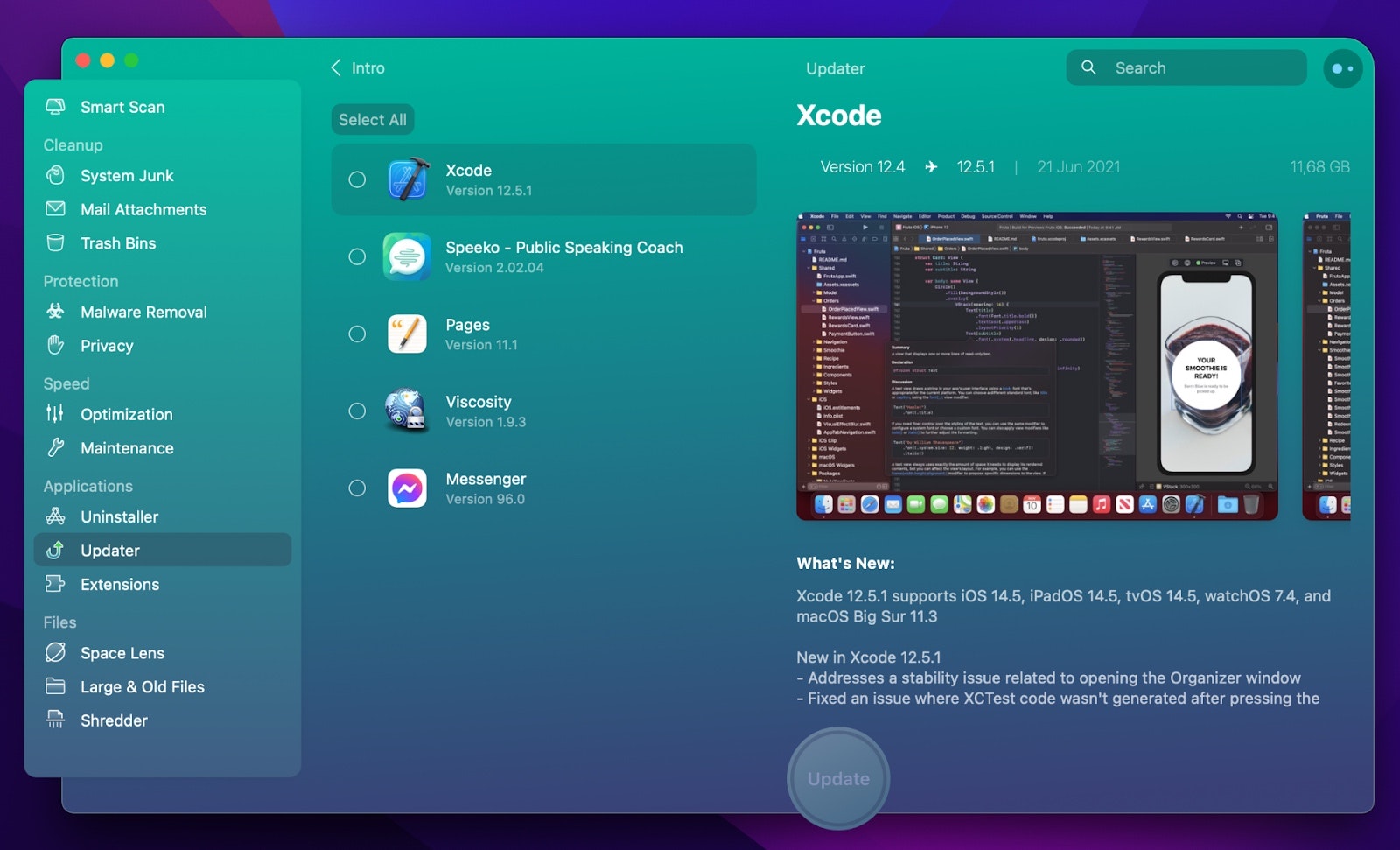 Every “Why I switched from Chrome to Safari” article highlights this — Safari does much better job in terms of battery life. Especially with Monterey improvements for Safari, it makes total sense to make it your default browser. The new tab groups are amazing.

The best way to make the most of your battery is to install Endurance, an app that automatically extends battery life by 20%. You don’t have to do anything, just enable energy saving. Endurance is very clever in terms of adapting to your flow. It can dim lights, snooze apps, and reduce processing speed based on what you do.

Loud fan noise and Mac heat are annoying. And certainly bad for your productivity, because a Mac tends to slow down when it’s overheating. Here are the working solutions we’ve tried.

iStat Menus has a cool controller for sensors, which lets you adjust fan settings to reduce the heat. Once you’ve installed it in your menu bar, click Sensors > Fans > Select “Medium” or “Edit fan rules” to adjust fan speeds as you like (reducing the speed should reduce the heat).

The next thing to try is to reset SMC. While SMC controls fans and temperature on your Mac, this should help solve overheating. Find a detailed guide on how to reset SMC in the “macOS won’t install” section.

Tip: Many people deal with Mac overheating, and it’s not always related to software updates. A very common reason is apps hogging your CPU (especially those that work in the background). This causes fan noise, excessive heat, and slow Mac. To deal with this, we recommend App Tamer, an app that slows down or stops those abusive apps.

Mac slowing down on Monterey

The “Monterey slow” issue has become very common since the beta went public. This is not new and happens with betas all the time. Some apps are not updated, some things still need to be perfected by Apple, and so on. However, you can improve the situation.

Speed up Mac with CleanMyMac X

Prevent apps from automatically launching every time you turn on your Mac. In fact, if you look at all the apps that launch at startup, you’ll notice you don’t even use many of them. They just sit there, slowing down your Mac. Here’s how to disable login items: 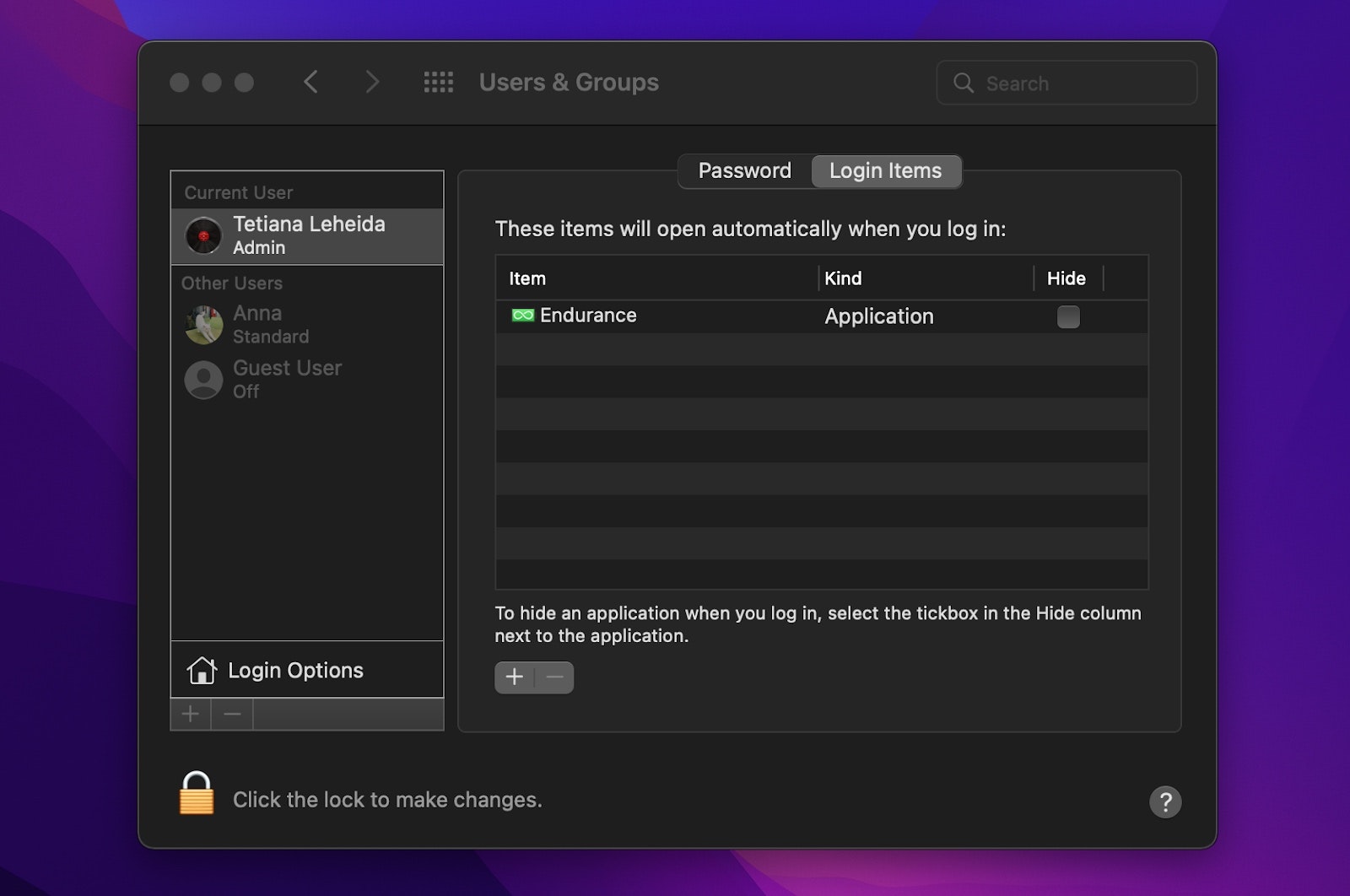 If you notice that a specific app always “uses significant energy” and taming it with App Tamer doesn’t help, maybe it’s time to say goodbye. Uninstall apps with CleanMyMac X — it’s the best way to do it because deleting apps manually usually leaves behind lots of clutter. Just open the app, click Uninstaller, select the app, and hit the Remove button.

Clean up to reduce clutter

Things like system files, old caches, and app leftovers could be the reason for your Mac’s slow performance. If you installed macOS Monterey over your old system and did not clean install it, you might have moved lots of clutter to your new macOS 12. Again, the best way to fix this is with CleanMyMac X. Run a Smart Scan or click System Junk to remove it all.

When connecting AirPods Pro to Mac, the Bluetooth menu shows battery percentage for both earbuds and the case. Or, at least that’s how it worked for me on macOS Big Sur. Since upgrading to Monterey, the Bluetooth menu has been showing my AirPods connection but not the battery level. Personally, this annoys me, so I’m fixing the problem with ToothFairy. 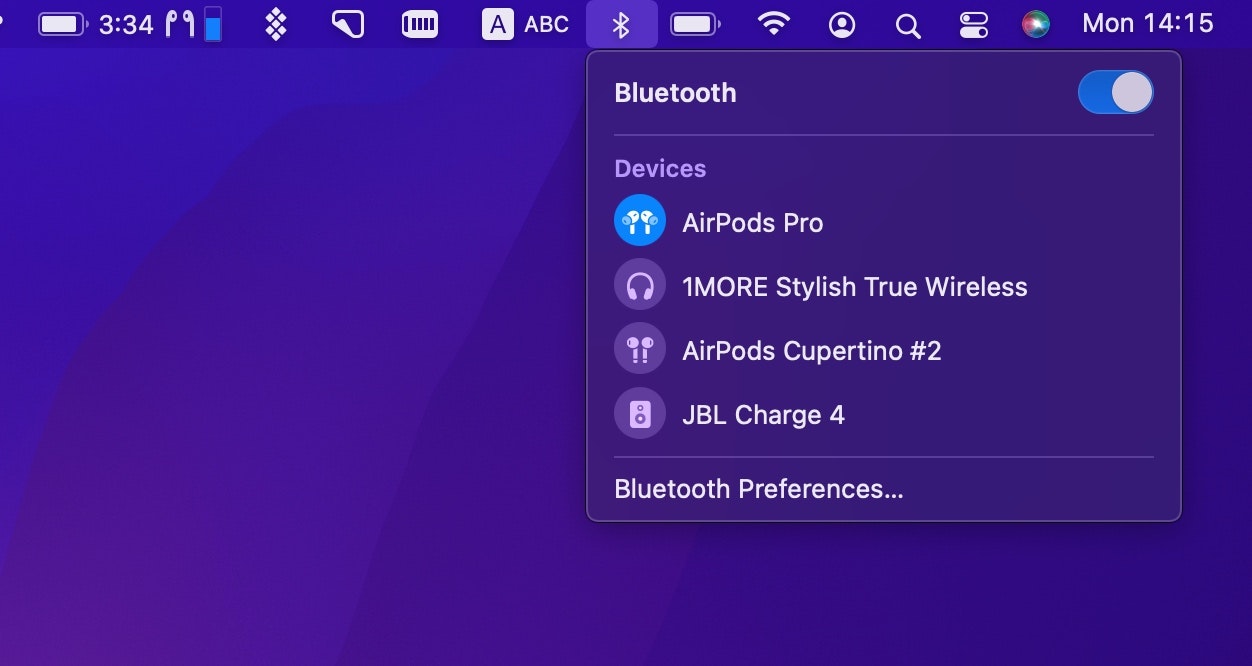 ToothFairy is a sleek app for Mac, doing just one job really — simplifying your Bluetooth connection flow. I use it to connect and disconnect my AirPods in a click and see the battery level indicator right in the menu bar. It’s possible to connect any Bluetooth device to Mac with TothFairy. You don’t even have to click on it, the visual indicator will stay in your menu bar permanently.

We’ve also seen cases when ToothFairy helps fix Bluetooth connection problems. This happens when the native utility is glitching for some reason. So if Bluetooth doesn’t work, just try connecting your device with ToothFairy.

That’s because it’s not there. Unfortunately, the public beta of macOS 12 doesn’t feature Universal Control — it will likely be added later. For those who haven’t heard of Universal Control, this is the new feature that lets you control Mac and iPad using the same mouse and keyboard. Built off Continuity and Handoff, Universal Control takes extended workspace to the new level. Once it’s there, promise to give it a try! 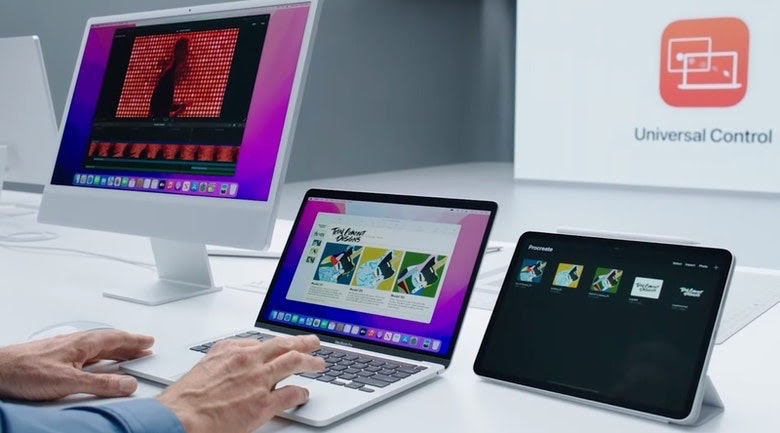 Issues with Music on macOS Monterey

Some people report Music acting strangely on the newly updated system. Part of this is new features. Part of this just bugs. Luckily, we’ve learned a few great troubleshooting techniques on MacRumors Forum which might help you: 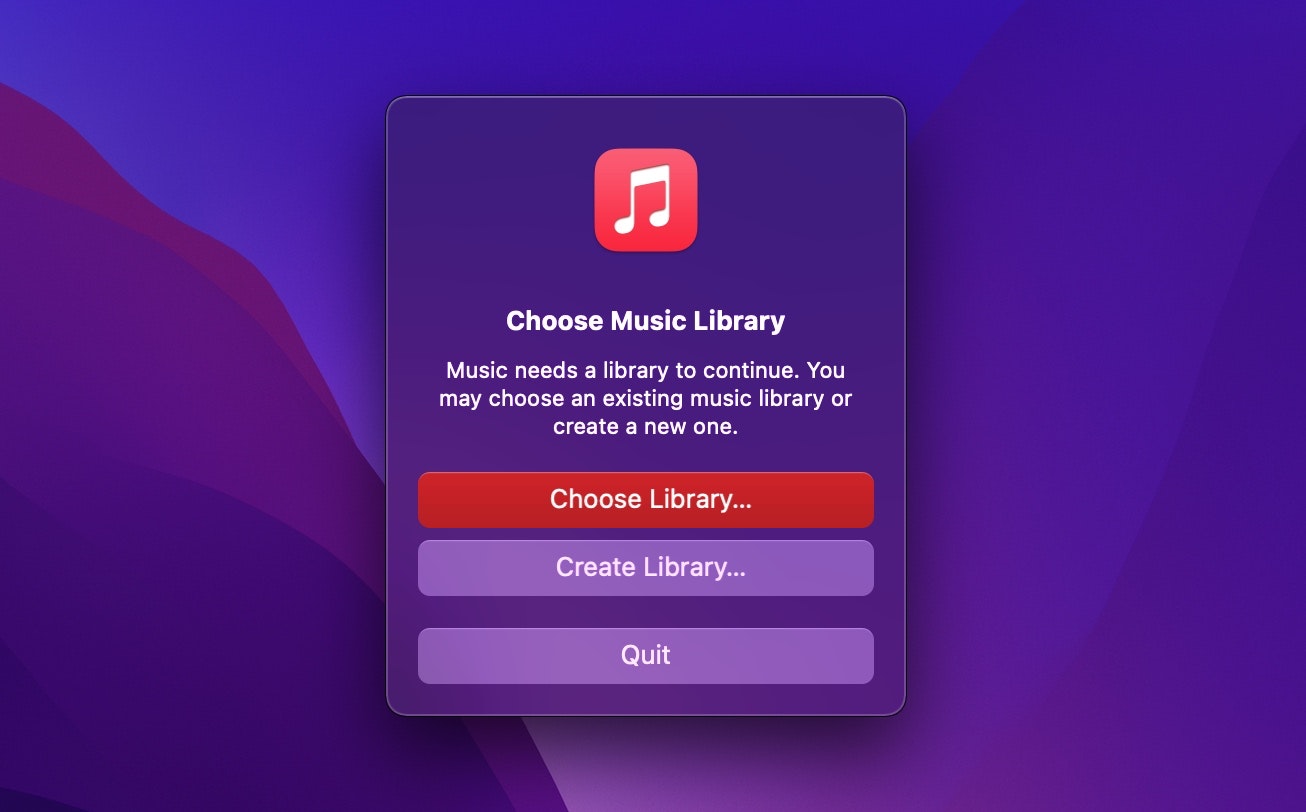 One collection of apps to tackle Monterey issues

Summing up, macOS Monterey issues revealed nothing critical so far. If you can’t install or download Monterey, it most likely has to do with storage space, network, or device compatibility. Slow Mac, overheating, and battery life problems are pretty common with beta updates. Apart from that, you might experience minor Bluetooth, Music, and AirPlay issues.

Setapp gives you a unified toolkit to fix Monterey problems with apps:

All these apps and 200 more are free to try for 7 days, then $9.99/month. For those starting the update process, Setapp is a huge help.

Finally, if there’s an unexpected issue that hampers your work and can’t be solved with Setapp, submit your feedback in Apple’s Feedback Assistant app and wait for Apple to get back to you. Not quick, but this can help raise awareness about important issues so Apple starts investigating them.