Got iOS apps? Flawless helps you make them look great on every device

Right about now, thousands of iOS app developers are looking at the new iPhone lineup and scratching their heads. Between the smaller iPhone SE, the “standard” 4.7-inch iPhones and 5.5-inch Plus models, and the brand-new iPhone X with its 5.8-inch screen with a notch at the top, developers sure have their work cut out for them making sure their app designs look good across all those devices. Not to mention the iPads too!

Flawless, a recent edition to Setapp, is the answer. This developer tool helps you compare your design mockups against what’s actually output by your code, so you can see exactly which elements are off, and by how much. It’s the perfect solution for perfectionists who want to get everything pixel-perfect. 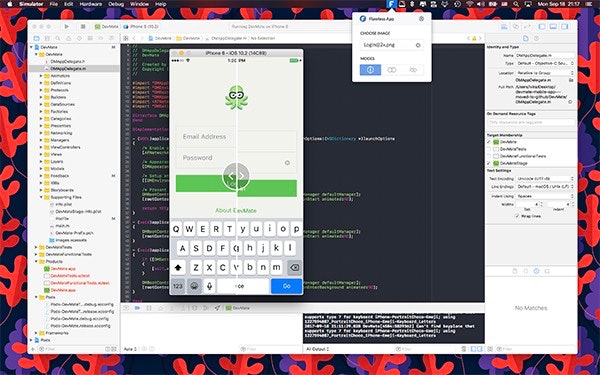 Flawless works with the iOS simulator, which developers use to test their iOS apps on a Mac. The simulator can mimic any iOS device made by Apple (all the iPad, iPhone, and iPod touch models), and your code runs inside it so you can test out your apps on your Mac, and save on-device testing for later.

What you can do with Flawless?

When you run Flawless, you’re asked to specify an image file to use for the comparison. This is the mockup you created of what you want your app to look like. Flawless accepts images in Sketch format, as well as JPG, JPEG, GIF, TIFF, and PNG.

Once you choose your image, Flawless will overlay it against what’s showing in the iOS simulator. There are three view options:

Pixel-perfect design sounds impossible, doesn’t it? It really doesn’t have to be. The developers of Flawless are, well, developers, and they’ve taken great care to make Flawless useful without adding extra work for you. It installs easily as a plugin to the iOS simulator, so there are no libraries to download or manage. And many prominent developers use Flawless and contributed feedback and testing, including engineers from Microsoft, Buffer, and MacPaw.

iOS 11 comes out next week. New iPhones are right behind it, and the iPad comes in four sizes now too. If you’re an app developer, you’ll probably be spending a lot of time with the iOS simulator in the near future, and Flawless can help make you more productive, finding visual bugs before you ship. We’re thrilled to welcome Flawless to the Setapp family.